The gay Mass held each week in Detroit and sponsored by the supposedly Catholic group Dignity has finally come to an end, ordered by the archdiocese.

But as the saying goes, there is much more to the story. First, here's some background.

More than 11 years ago, Church Militant began covering the enormous scandal of the homosexual Mass said each Sunday in the archdiocese of Detroit at Marygrove College.

Dignity was officially condemned by the Vatican for opposing Church teaching on the matter of homosexuality back in the mid-1980s. The Detroit chapter of the worldwide group was established in the archdiocese by current Detroit Aux. Bp. Francis Reiss, who at the time was a seminary professor here. You need to think about that — a professor teaching future priests,  himself a priest — who believes that Church teaching is wrong on homosexuality. And of course, now he is a bishop.

The Sunday Mass is believed to be the longest continually running Mass by any Dignity chapter in the world more than 40 years unbroken, rivaled only by the Mass offered in the Newtown neighborhood in Sydney in Australia. Church Militant, you may remember, infiltrated that Newtown Mass and when it was over, tried to question the priest, but he took off out a back door and gave us the slip, running down the street in the dark of the night to avoid our Church Militant cameras and questions.

Vigneron could have penned the statement himself and delivered it in his own name. He didn't.

Likewise, Church Militant has twice infiltrated the Detroit Dignity Mass, as recently as two weeks ago. And a number of years ago, a couple dozen protesters gathered outside Marygrove College in Detroit where the weekly Mass was held, begging Detroit archbishop Allen Vigneron to bring this shame to an end. Their pleas went totally ignored and the Mass continued unabated, with Detroit priests proceeding with business as usual.

This Mass has been completely ignored by the Catholic establishment media for decades, even as the communications director, Ned McGrath, got caught red-handed, lying through his teeth about the Mass being held on Church property. Then Cdl. Adam Maida also lied about the Dignity group's presence on Church property, because by then the Vatican had already condemned the group almost 10 years earlier.

But the gay clergy cabal in Detroit completely ignored Church teaching, as well as orders from the Vatican and just let things keep moving along because so many bishops, auxiliary bishops and clergy were all so supportive of it — and that includes current archbishop, Allen Vigneron.

And Vigneron's support of Dignity has not been for just the past 12 years while he has been archbishop with the authority to have stopped it immediately, dead in its tracks.

Vigneron was ordained for Detroit in 1975 by pro-homosexual Cdl. John Dearden, the same cardinal who, when he died, was lauded by TIME Magazine as one of the most liberal churchmen in the U.S. Catholic hierarchy — and that, ladies and gentlemen, is quite the statement. Dearden created a very pro-gay environment with his clergy and indeed throughout the entire archdiocese during his nearly quarter of a century as archbishop here. No one advanced up the clerical ladder without at least tacitly accepting his modernism.

Vigneron was part and parcel of that establishment, aligning himself every step of the way with the gay clerical establishment which dominated affairs here right up to the present day. Vigneron — a Dearden favorite — rose quickly, eventually being assigned to the seminary staff, in between various jaunts in Rome, and then becoming rector and finally auxiliary bishop, entrenched in the pro-gay establishment that is Detroit. After a brief stint in Oakland California, he came back to Detroit almost 12 years ago as archbishop and left almost the entire homosexual chancery in place.

That is the background you need to know as you now look at the decision to finally bring an end to the Dignity Mass after more than 40 years — and 12 years on his watch — which again, at any point, he could have ended instantly.

So why now? But also very important to any analysis is how?

While the declaration was issued in the name of Vigneron — very important to note — he did not do it. He shuffled the duty off to an auxiliary bishop, Gerald Battersby. For such a monumental, historical announcement, you would think Vigneron could have penned the statement himself and delivered it in his own name. He didn't.

But as to why now? Even Battersby had to dance around that issue in his official statement, conjecturing:

I've been asked why this matter was not addressed previously, and I assume the answer is that a pastoral approach ... was in place, though I have nothing to base this on except a presumption of charity. Beyond this presumption, I have no further information as I was not yet part of the team entrusted with this portion of pastoral care.

Bishop Battersby goes on to say, however it came about, we should all just move on and recognize the work of the Holy Spirit. Well, that much we can certainly be thankful for, but that quick little missive isn't the whole story.

Church Militant has learned that a number of significant donors to the archdiocese — after becoming familiar with Church Militant stories on this — refused to keep giving until this situation was brought to an end. That was almost a year ago. In the spring or summer of 2019, chancery officials started working out a strategy to bring the Dignity Mass to an end.

So a series of statements and programs from Vigneron hinted at the need for faithfulness to Church teaching. But still, there wasn't the stomach to actually pull the trigger, certainly not by Vigneron himself. He set the table for it to happen, but when the moment came, he himself retreated into the shadows and dumped the duty on Battersby.

Vigneron is terrified of the homosexual clergy in the archdiocese.

If you want to understand that, you need to remember that Vigneron is terrified of the homosexual clergy in the archdiocese, most of whom he went to school with and has spent virtually his entire career with. That was publicly confirmed by one of the seminary professors, Mary Healy, at the Q&A session of a public gathering last year when she was asked why Vigneron was letting the Dignity Mass go on. She answered bluntly, and publicly, that he was scared of the gay clergy in Detroit.

There you have it. It's not even a secret in Detroit. The gay clergy, the senior leadership of Detroit, runs the show and Vigneron lets them.

Unlike Fr. Eduard Perrone, who is innocent — and, for the record, blew the whistle on the gay mob at the seminary decades ago — unlike him, the gay priests in Detroit are allowed to romp freely — never reprimanded, given plum assignments and on and on.

Don't be fooled by this latest action. While it's good objectively, the motive for doing it is not what it appears. And the proof is in the pudding. If the Dignity Mass was considered so bad, and ending it was a work of the Holy Spirit, why did Vigneron take 12 years to do it, and then slough it off onto a subordinate to carry it out? And don't forget, even that subordinate couldn't provide an answer to that question, at least not publicly.

What the Dignity group finally being evicted after nearly 50 years shows is what we already knew: What motivates bishops to act like bishops is being exposed and losing money.

And if that is how the Holy Spirit has to go about it, then blessed be God. 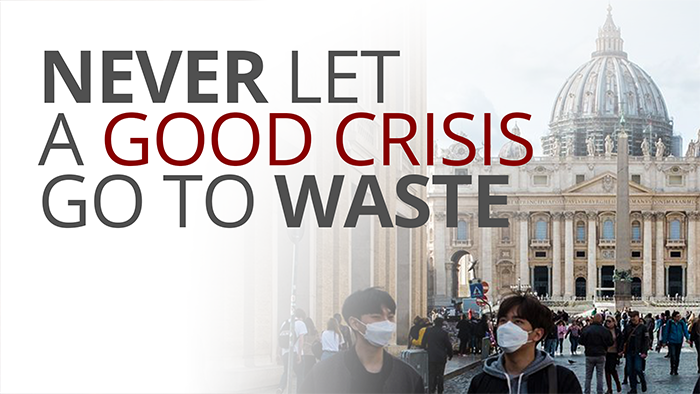