Without it, no man is saved.

When we speak of man being made in the Divine Image, the Imago Dei, one dynamic present there is our intellect, the ability to arrive at truth and then embrace it. You see this very thing playing out very early in even a child's life, a desire to know, to grasp truth, to grasp reality.

Only when a small child grows to adulthood does the starkness and reality of truth become something that he may want to avoid and flee from. But even then, there is at least a tacit recognition of truth, because if there weren't, what exactly would he be fleeing from?

Truth, by its nature, is inescapable because of this one simple but all-encompassing point, it is the nature of truth to be known. But beyond being known, truth must be conformed to. Truth is the hard reality that, if you live in opposition to it, your life will be miserable, and you will end in misery.

It is the nature of truth to be known.

Conforming to truth requires that sound reasoning for truth must be first be discovered and understood. Recognizing this simple truth about truth, 10 years ago, Church Militant set out on course, producing a program we called Right Reason. It was hosted by a brilliant and humble man, Dr. Charles Rice, who loved us and what we do here.

And as a little footnote, if you think what we say about the failures of the U.S. hierarchy and their staff is pretty bad, you should have heard Dr. Rice's take. Let's just say that a man who dedicated his life to the truth was pretty blunt in expressing the truth about that miserable lot.

It was also very gratifying to me to see my dad and Dr. Rice instantly hit it off like they were long lost brothers, without ever having met prior to Dr. Rice coming to Detroit to record the shows. Good men are drawn to each other and share in the light of truth.

The show Right Reason is one of our premium shows here at Church Militant (there are 26 episodes of Right Reason — during which I had the blessing to share the stage with Dr. Rice as he explained the great gift of reason and its power). A few days ago we spoke of the alternate reality in a culture that accepts the lies and misinformation of elites who seek to destroy truth.

An elitist crowd that desires to so obscure the lines between good and evil, right and wrong, truth and falsity so as to create a culture where anything goes, any act is permissible, except saying the truth and witnessing to it.

All the gods of Rome as well as the gods of the enslaved peoples were acceptable to caesar, except the One True God. God created man with the inborn knowledge of right and wrong and, in his conscience, reveals to him his own guilt. It is the proverbial law of God, written on our hearts.

The world is in its current condition because of the lack of conviction of Catholics.

This is just a small sample of the wisdom of the Church you will find here on Church Militant as a premium member. The world is in its current condition because of the lack of conviction of Catholics as well as because of the ignorance of men of goodwill, who have never encountered the fullness of Christ in His Catholic Church.

Please sign up today and become a premium member here at Church Militant.

Channel the justified anger you have at the current political and cultural scene in shoring up your spirituality and theological knowledge.

Church Militant premium is only $10 a month, and it not only goes to the premium work we do, but also helps defray the cost of every other program you get for free, like this Vortex episode for example.

Vortex and other things here at Church Militant are free to you, but they aren't free to produce. All this week, we'll be spotlighting various premium programs we have — thousands of episodes — in the hopes that you will sign up and watch them. And if you are a premium member, then take this as a gentle reminder to view them anew.

There is a great cultural war raging, and at its heart is a spiritual conflict — the war for souls launched in Eden and existing in every single man's heart. No man can win that war without being grounded in truth as a first priority. So please, sign up today — help us help you while you help us to evangelize the world. 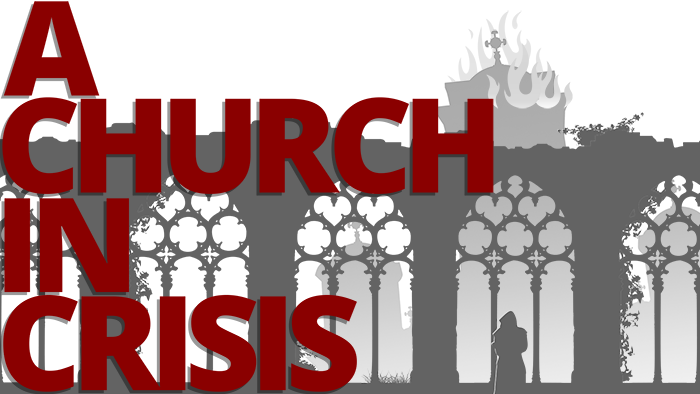 A Church in Crisis
It needs to be brought to an end.