One was the much-anticipated announcement of the United States Justice Department (DOJ) opening its own investigation into cases of sexual abuse at the hands of priests in Pennsylvania and any related cover-ups by bishops there — like Cdl. Donald Wuerl, who had to step down as archbishop of Washington, D.C. owing to his role in the cover-up.

Related to that, it was also revealed that the diocese of Buffalo has been under increasing scrutiny by law enforcement officials there for the same reasons the DOJ is probing multiple Pennsylvania dioceses.

As one further welcome note, media attention is now lasering in on the diocese of Buffalo in the specific case of Fr. Joseph Moreno — a story Church Militant first brought you last month and updated last week.

Church Militant has learned that CBS News has also begun examining the very suspicious death of Fr. Joe, which was ruled a suicide but family and friends say, no way, as multiple facts in the case simply do not support that conclusion.

Various things point to the fact that Fr. Joe may have actually been murdered before he was about to go public about the homosexual network in the diocese of Buffalo.

The cloud of homosexual immorality is hanging thick and low around Vatican City these days as various churchmen with deep ties to and support of the gay agenda are running the show. Even the pretend Synod on the Youth is being viewed by those closely following it as little else than a pretense to advance more acceptance of sodomy in the Church.

The specter of homosexuality and all its attendant evils for those who are active was brought home also last Friday as the second bombshell exploded over the Rome, the release of the third statement by the much-hunted Abp. Carlo Maria Viganò.

Viganò, recall, is the former former papal ambassador to the United States, driven by his conscience to reveal the secrets he knows about the cover-up of Theodore McCarrick's evil by Pope Francis and other cardinals, as well as the rampant homosexuality among multiple influential members of the hierarchy — what Viganò has called the homosexual current running through the Vatican and the hierarchy.

Viganò's statement is all the talk in Rome as he lashed out at critics in the Vatican for defending the evil of homosexuality and still others for maintaining their silence for the sake of their careers while souls are being lost.

He said in part, "McCarrick was part of a network of bishops promoting homosexuality who, exploiting their favor with Pope Francis, manipulated episcopal appointments so as to protect themselves from justice and to strengthen the homosexual network in the hierarchy and in the Church at large."

And then, in a direct charge against Pope Francis, he said, "Pope Francis himself has either colluded in this corruption, or, knowing what he does, is gravely negligent in failing to oppose it and uproot it."

That last charge points the finger directly at Francis as the ultimate cause of all this evil.

Francis has promoted and advanced the careers of known homosexual predators, promoted them to powerful positions, brought them into his inner circle of advisors and has likewise showered cover-up bishops and cardinals with the same praise and glory.

These men — like Wuerl, Farrell, Tobin and others — have lied about what they knew, when they knew it and continue to refuse to admit their guilt in all this.

Their hardness of heart and betrayal of office, as well as the laity, has set off a storm of justified anger among peasant Catholics now seeing that, as long as Francis is Pope, these wicked prelates are unaccountable and feel as though they can get away with murder.

"This is a crisis due to the scourge of homosexuality, in its agents, in its motives, in its resistance to reform. It is no exaggeration to say that homosexuality has become a plague in the clergy, and it can only be eradicated with spiritual weapons."

But Viganò didn't stop there. He called out the other men in the hierarchy who he says know all this is true — the McCarrick cover-up, the homosexual mob running the Vatican, all of it — he calls them out for being cowards as they remain silent, and said they have a choice to make.

You can choose to withdraw from the battle, to prop up the conspiracy of silence and avert your eyes from the spreading of corruption. You can make excuses, compromises and justification that put off the day of reckoning. You can console yourselves with the falsehood and the delusion that it will be easier to tell the truth tomorrow, and then the following day, and so on.

On the other hand, you can choose to speak. You can trust Him who told us, "the truth will set you free." I do not say it will be easy to decide between silence and speaking. I urge you to consider which choice — on your deathbed, and then before the just Judge — you will not regret having made.

This steady drip, drip, drip of disastrous news is taking its toll here at the Vatican. Around the world — especially in the United States — the Pope's popularity is plummeting as news continues to pile up that, while he was archbishop of Buenos Aires, he too covered up homosexual predator priests and repeatedly lied about it.

In fact, the damage Francis and his homosexual pals in the Vatican are doing to the Church in general and to the papacy specifically is so extensive that some in Rome are praying and quietly talking about the blessing it would be for the Pope to die or resign.

Many are wondering around the Catholic world how much more can the Church endure, and when that discussion is being freely had here in Rome itself, you know crisis has become the new normal.

There is no doubt that in the face of U.S. Justice Department starting to sniff around, the latest Viganò statement, the growing anger of the faithful and the either silence or haplessness of so many bishops, it's not going to be long before something erupts in the Church. 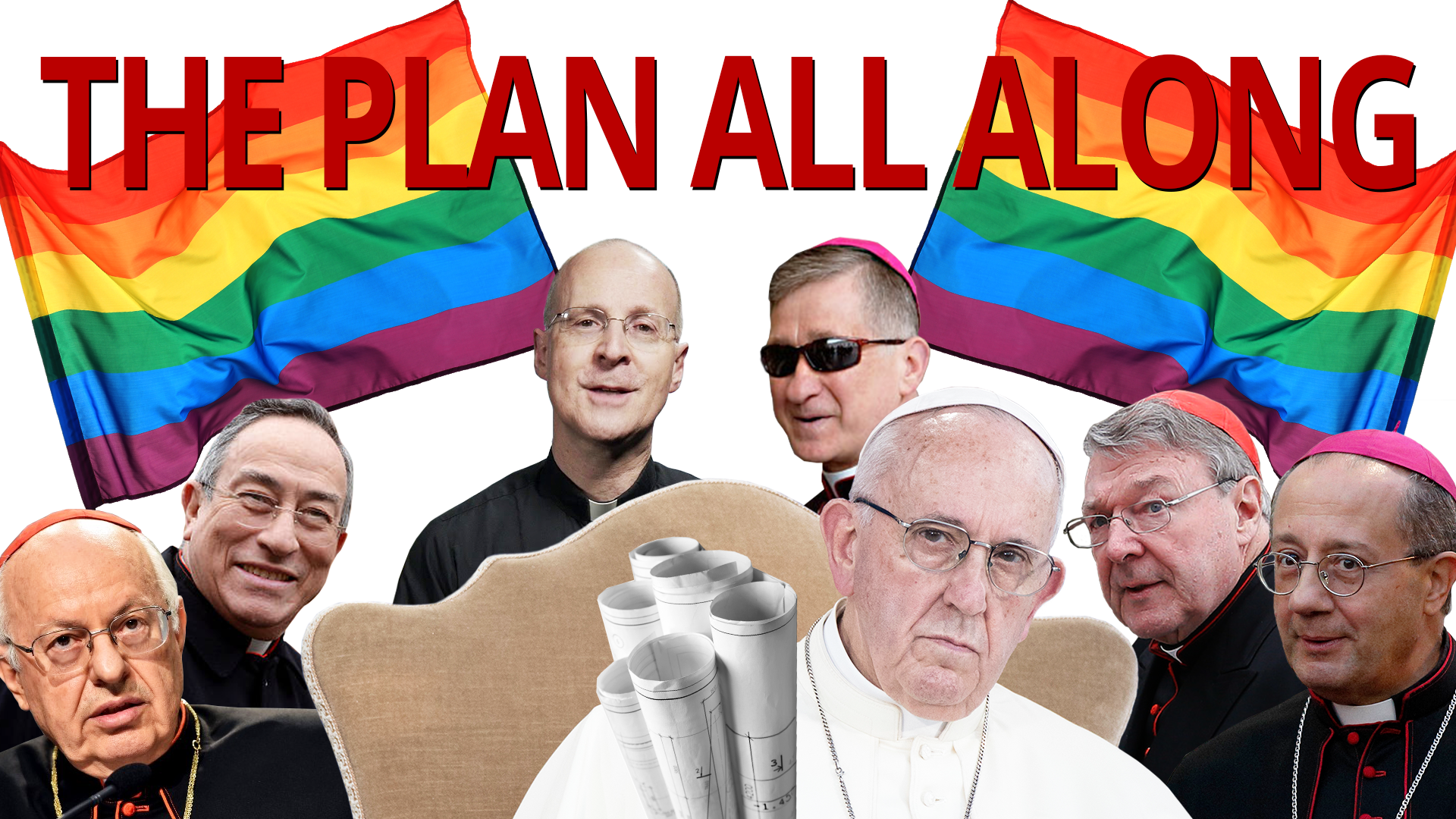 The Plan All Along
It's really obvious.