They will get exactly what's coming to them.

There are some truly twisted men wearing miters who appear to care nothing for souls, the Church, the truth or anything that doesn't advance their personal agenda.

Take, for example, Bp. Arthur Serratelli of Paterson, New Jersey, who was officially notified eight weeks ago that two of his priests appear to be carrying on an active homosexual affair.

These disgusting photos were on a private account — but not too hard to get to once you found out.

And what's more, to emphasize, these same photos and more information was sent to Bp. Serratelli, and he has done nothing about it. The two priests, Fr. Dulibber G. Gonzalez and Fr. Marcin Bradtke, are still, right now, at their same assignments.

Not only was Serratelli informed via email, but so were a huge number of his staff in the chancery. The official response? Nothing. Although shortly after the diocese and Serratelli were informed, the private Facebook page suddenly was taken down.

Church Militant reached out to Serratelli and the chancery personnel multiple times and heard zero response. Now, you may be shocked and surprised by such blatant filth, and even more surprised by the knowledge of it by a bishop and his cavalier attitude toward it — don't be.

This is far more common than various bishops would ever want you to know. In short, if it's worldly, too many of them go along with it — whatever the it is.

We continue to see this, time and time again. In fact, in some ways, it is the dominant thread running through almost every story we hear at Church Militant — a willingness to accept the secular liberal leftist's agenda, coupled with moves to wipe out any vestiges of the actual faith — albeit, sometimes this is approached more carefully.

We have, for example, the story of now Detroit Archbishop Allen Vigneron who self-admittedly knew about a predatory lesbian nun on the faculty of Sacred Heart Seminary while he was rector — and allowed her to remain.

When news broke last week that one of the victims of Sr. Mary Finn had come forward, she resigned in disgrace, decades after Vigneron let her slide.

He issued a statement saying he had thought the matter was "resolved." Seriously? How was it resolved? You allowed her to remain on the faculty to influence 20-plus years of seminarians?

This, by the way, is the same archbishop who still, 10 years after becoming archbishop, continues to let the homo-Mass go on every Sunday in his diocese — no questions asked, no comments made, no warnings to the faithful issued, nothing.

But see, that's all gay, so he's completely fine with it. On the world's agenda, gay is good, so this archbishop is down with it.

He also is the primary mover behind the Protestant Alpha program running roughshod over unsuspecting wannabe Catholics all over the country.

It panders to "non-offensive, politically correct" way of evangelizing, so of course, he's cool with that as well. He has to be of course because he's about to try and rip off the faithful in Detroit for another 200-plus million. On the world's agenda, not giving offense is good, so he's down with it.

Then you have the charlatans — supposed academics — in the politically correct Church of Nice establishment all running to the defense of Dr. Stephen Lewis at Steubenville who had his class read a book talking about the Blessed Mother and active sexuality — and we will leave it at that.

The phony "everything is okay as long as it's protected by academic freedom" crowd, many of whom have extremely close ties to Wicca — yep, Catholic witches — got all in an uproar.

Franciscan even defended the book and its blasphemy until the blowback got red hot and President Fr. Sheridan had to issue a statement denouncing the book but still shockingly defending professor Lewis, who should be fired.

On the world's agenda, academic freedom is good, so Franciscan administration is down with it. Then, of course, we have the recent example of the boys from Covington Catholic High School who were confronted while minding their own business by an old pagan pounding on a drum, who happens to be a Native American activist.

He confronted them. All the video proof in the world is right there. But as soon as the liberal worldly media spun the story into a privileged white toxic teen male wearing a MAGA hat asserting his dominance over the poor little old American Indian, the diocese of Covington, run by old liberal Bishop Joseph Foys, immediately chose to side with the world and against their own Catholic boys — even threatening expulsion.

But on the world's agenda, slamming white toxic masculinity with MAGA hats on is good, so Bishop Foys is down with it.

Heck, even the nation's bishops, the United States Conference of Catholic Bishops, couldn't pass up the chance to take a sideways slam against Trump, dressing the entire affair up as somehow spiritually wrong — the boys, that is. The old drum pounding liberal activist Indian, hey, he was cool.

But immigration and reparation is a good thing on the world's agenda so the modernist bishops and their liberal staffs are all down with it. We could go on and on with zillions of examples, but you get the idea.

If you are a faithful Catholic, you are the enemy in too many of the bishops' eyes because you are probably also politically conservative, meaning you want the wall, reject man-made climate change, know that social justice warriors are Marxist infiltrators, think sodomy is actually evil and mortally sinful and probably voted for Trump because of all that.

But if you are a political whack job, perverting Catholic doctrine to advance a decidedly anti-Catholic world view within the Church, then there is hardly a bishop in America who won't pick up his skirt, throw on his pumps and come running to your defense — with or without his clutch pearls.

If it supports gay crap, illegal immigration, phony climate change, the democratic Marxist socialist party of death, the bishops will be right there backing it up 1,000 percent.

What these men have done to the Church, to the faith of countless millions, well, as Our Blessed Lord said to the Pharisees: How can any of you escape damnation? 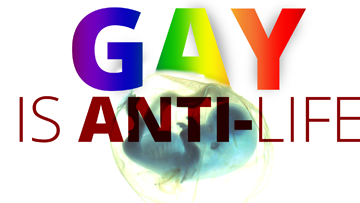 Gay Is ANTI-Life
They'll even kill to commit sodomy.