This Vortex is aimed specifically at seminarians who, in short order, will soon begin inheriting a Church in near-complete shambles.

If you get all the way to ordination, kneeling down before your bishop to be made another Christ, then you will inherit a sacred duty.

And given the current climate, your sacred duty will include the massively uphill struggle of restoring faith in the Real Presence of Jesus Christ in the Eucharist.

This will involve for a good number of you the throwing off of a "Catholic Lite" approach you have largely grown up in and breathed for most of your young lives.

It will require a kind of interior rejection of what many of your current bishops see as the liturgy, which to them is a communal meal where fellowship and the congregation are most important.

It is the past 50 years of episcopal negligence — and, in some cases, wickedness — which falls to you to now reverse.

Facing the people with your back to God, Holy Communion in the hand, reception from the cup, armies of so-called eucharistic ministers, all of these must eventually be abandoned.

Each of them is both a symptom and a cause of the staggering disbelief in the Real Presence revealed in that recent Pew Research poll showing 70% of Catholics do not believe and, most strikingly, one-third of those sitting in your congregations each Sunday, likewise, believe in the real presence of Jesus Christ in the Blessed Sacrament.

You seminarians, even now, need to begin in your souls, committing yourself to waging this war to restore this belief.

Each of you is going to be ordained predominantly to absolve sins and call God down from Heaven.

You are not being ordained to run soup kitchens, fight against fake man-made climate change, agitate against immigration policy or issue screeds against gun violence.

The God you are desiring to fashion yourselves after has told His followers unless you eat the flesh of the Son of Man and drink His blood, you have no life within, little hope of the Resurrection.

Preparing your parishioners for eternal life is your calling, your sacred duty, and nothing else.

And frankly, if you do not fight with every ounce of spiritual and physical strength you have to dispel the demonic disbelief and rejection of Our Lord's Real Presence, then leave seminary now before you jeopardize your own salvation, which you most certainly will.

If you want to affect policy on those types of issues, then leave and go be a politician.

Many of your bishops have over-emphasized the temporal, relegated the spiritual to secondary concern — and we have a Church in catastrophe because of it.

It will be your sacred duty to reject that disastrous approach and begin to right this ship. You will no doubt suffer at the hands of the Establishment because of it, but if you are not prepared to suffer for the good of souls, leave now.

The collapse of the Church has come about because of a collapse of belief in the Real Presence, the source and summit of the Faith, therefore, your sacred duty is already marked out for you.

The rejection of Our Lord's sacramental presence is the reason Church Militant produced our first-ever documentary, The Holy Eucharist: God's Lamb, which we premiered here in Metro Detroit this past Saturday at a local movie theater.

About 120 attended the event, complete with a red carpet and light lunch. When the movie was over, we got some reaction from those who watched it.

We'd like to show you a brief chapter now from our documentary; the setup is that Our Blessed Lord has just been deserted in Capernaum by His followers after announcing the necessity of eating His flesh and drinking His blood.

For seminarians, as well as faithful Catholics, this is the world we are now in, most especially inside the Church.

This lack of faith must be dispelled. It has been decades in the making, and future priests will face the devil himself in fighting against it. But this is your sacred duty; you are going to be ordained for the singular purpose of snatching souls from the serpent.

But take heart, you have the God of Heaven and earth who will not abandon you.

For those of you who would like to purchase a copy of the documentary, please click on the provided link. 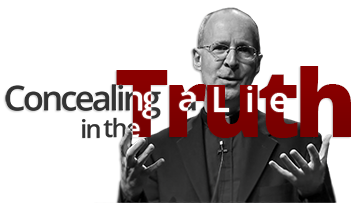 Concealing a Lie in the Truth
A devilish ploy.