Non-stop questions. And the continued lack of clear answers.

Instead of becoming more clear, the mystery surrounding the identity of the wooden statue of an omnipresent nude pregnant woman just grows deeper.

The Vatican has now been asked directly, twice, about the identity of the statue which first appeared at the Vatican Gardens tree-planting, Mother Earth-worshipping ceremony at the opening of the synod back on Oct. 4.

So scandalized were Catholics all over the world at the goings-on of a female shaman and her troupe bowing down to this figure on a blanket representing the earth, that social media lit up with questions about the identity of the statue.

And when the statue was presented to Pope Francis and carried into St. Peter's Basilica the next day in a canoe, the highly warranted speculation that some pagan event was going on intensified, because, well, that sure is what it looked like.

Who is the statue supposed to be? Traditional-minded Catholics saw some pagan goddess type figure.

Papal apologists like the liberal British reporter Austen Ivereigh claimed on social media that it and a second nearly identical statue were Mary and Elizabeth — both pregnant.

The social media war then erupted between Ivereigh and actual Catholics, with orthodox Catholics pointing out that first, they didn't believe it as supposed to be Our Lady, and if it were, it would be highly disrespectful and offensive to present her in the nude.

Ivereigh took the opportunity at the following day's Vatican press conference to try and embarrass faithful Catholics, but he is the one who wound up with egg on his face.

When called on, he took a swipe at what he termed "some American media" for interpreting the wooden figure as a "pagan symbol of fertility" and asked the panel to clarify.

The response he got back was not what he wanted to hear. One of the Amazonian bishops responded:

We all have our own interpretations — the Virgin Mary, Mother Earth. Probably those who used this symbol wish to refer to fertility, to women, to life ... the life present in the Amazonian peoples.

I don't think we need to create any connections with the Virgin Mary or with a pagan element.

Well, whatever that meant, it did make clear it was absolutely not the Virgin Mary.

This week, the matter came up again, and this time, the Vatican punted on the question of just who the statue is or what it represents.

Paolo Ruffini, prefect for Communications said, "It represents life through a woman."

But then he quickly backpedaled, saying that was just his personal opinion and as a matter of fact, for the record, he didn't have the slightest idea what the controversial figure was or who it represents.

Reporters were told to check it out with the Pan-Amazonian Ecclesial Network (REPAM) as well as the Catholic Movement for Climate, the groups that organized the tree-planting ceremony and the statue's presence in Rome.

So, the statue is, at the very least, a symbol of fertility, which in pagan worship is always identified with a deity. Catholics don't worship, or even have symbols specifically celebrating fertility, per se — which is why the dominance and high-profile this statue has received at the synod is so troubling.

At this very moment, the Mother Earth blanket and the statue, along with other little figurines, are covering a side altar just down the via from St. Peter's at the well-known Santa Maria in Traspontina, as our Church Militant video clearly shows here.

Organizers stand by the displays handing out literature and so forth promoting the Amazonian culture and life and keeping guard over the sacrilegious display.

That Mother Earth blanket was laid out in the Vatican garden and bowed down over by the Amazonians. Prayers were offered to something by the female shaman.

Of course that's what it is. What else would it be? Those types of actions are universally recognized everywhere, in every culture, Christian as well as pagan, as having religious significance; which brings up the very serious issue: Why are these pagan — because the Vatican has already told us they aren't Christian — why are these pagan worship symbols adorning nearly every side altar in this Church dedicated to Our Lady?

Who suggested it? Who approved it? Why?

And how is it that the Vatican itself can't even provide a straight answer. These Mother Earth blankets and canoes and goddess, fertility, life symbols with their elastic interpretations are at the very foot of the dias in the synod conference hall each day.

They sit right there, sprawled out right in front of the successor of St. Peter, and not a soul in the Vatican seems to want to go on record saying exactly what, or more precisely who these things represent.

In paganism, Mother Earth is seen as a goddess, oftentimes referred to by the name Pachamama. Fertility is the domain of another personal goddess.

Both those symbols are the headliners in Rome right now, and we are supposed to believe that this is no big deal and, adding insult to injury, that no one really knows what they represent.

This pagan garbage has no place in Rome — period. 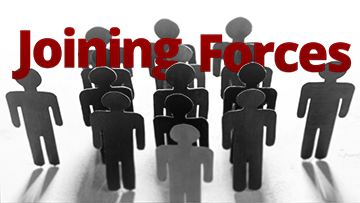 Joining Forces
The Left is brilliant at it.