Satan at the Vatican

The diabolical is in Rome.

I'm Michael Voris coming to you from the Vatican where there are conflicting reports about a potentially explosive 6-year-old dossier, up to now largely forgotten. The 300-page dossier dates back to the final months of Pope Benedict's pontificate, and reports from multiple sources is that it is now circulating in various corners of the city.

Conflicting reports about its disturbing content seem to hinge on uncertainty about whether possible redacted versions of it are being seen by some, while others are seeing the original. Additionally, questions are arising whether the original dossier was just the groundwork for a possible dossier containing much more damning information.

What we can tell you is: One, Church Militant has more double sourced this; and two, these sources for have never been wrong about anything else they have tipped us off to. Now, the original dossier was compiled in the wake of what was tagged "VatiLeaks," a reference to the theft and release to Italian journalists of various private documents of Pope Benedict.

Three cardinal-investigators eventually compiled their findings into a dossier and presented it to Pope Benedict just a couple of months before his surprise retirement in February of 2013.

Despite the intrigue surrounding the dossier and rumors of its salacious details and various prelates and cardinals being named, it fell off most people's radar and into obscurity once Benedict's retirement and Francis' subsequent election began dominating the headlines.

Still, for the past six years, people here in Rome and elsewhere have had some quiet interest in whatever became of it, and now there may be some answers.

According to reliable sources, it was stumbled upon by authorities at a drug-fueled homosexual party on the top floor of the Congregation for the Doctrine of the Faith in March of last year — 2017.

It was the apartment of Fr. Luigi Capozzi. The Pope had given him the apartment at the urging of homosexualist Cdl. Francesco Coccopalmerio.

Reports are when the bust happened, Coccopalmerio himself was present but permitted to leave before arrests started being made and during the raid, authorities confiscated the dossier in a sweep of the apartment and vehicles.

From there, reports are that awareness of the dossier started slowly growing and being circulated around Rome, and, according to insiders, Church Militant is in communication with the dossier and/or additional documents contain frightening and disturbing information that many people are nervous about releasing them.

Since arriving in Rome, Church Militant has learned more about the dossier, although we have not actually laid eyes on it.

Some of those who have, tell us that the information is not just about homosexuality within the Roman and Vatican clergy, but also satanic rituals, which, if true, would be beyond explosive.

On this point, faithful Catholics here in Rome and other locations of late have been speculating and quietly discussing that the evil which seems to have gripped so many levels of the Church is beyond usual human failings of sin and bad judgment, that there seems to be something directly diabolical at foot.

Indeed, Abp. Viganò speaks about the direct work and presence of the demonic in all that is currently going on in the Church. But Viganò isn't alone in pointing a finger at the diabolical.

For the past few decades, there has been much argument back and forth about, for example, Fr. Malachi Martin's declarations that satanic rituals were taking place here in Rome involving various members of the hierarchy.

The controversial Roman exorcist Gabriele Amorth — who died two years ago — warned publicly about the very real presence of the diabolical in Rome and the Vatican.

Adding to all this, numerous churchmen will tell you privately that among the sinister players at work in the hierarchy are various Freemasons — some in extremely influential positions, hidden in plain view.

Aspects of Freemasonry have long been associated with satanism, so the connections between active homosexuals, Freemasons and satanic practices here in Rome shouldn't really come as that much of a surprise.

Freemasons have long sought the overthrow of the Catholic Church and infiltration into the clergy and hierarchy of morally corrupt agents — including active homosexuals — is a known tactic used by Freemasons as well as communists, as testified to by former Communist Party member Bella Dodd.

So when a number of very public issues begin to collide, they feed this rumor mill, which may very well be true. For example, the staff Pope Francis came out carrying at the opening Mass of the Youth Synod very much resembled a wiccan stang used by witches, the very public display of what looked like a gay pride cross being worn by the Pope at one of the sessions.

The Vatican, of course, had quick explanations for all of this in the face of an explosion on social media best summed as — what the Hell is all that?

But the very fact that the Vatican had to offer explanations for what even looked like symbols of witchcraft, sorcery and sodomy adorning the person of the Pope shows — at the very least — a completely out of touch Vatican and, in many people's minds, something far, far worse.

Additionally, as mentioned, Freemasonry is the sworn enemy of the Catholic Church, being officially, publicly condemned by more popes than any other single thing in the Church's history — even as recently as by Pope Benedict.

Yet since he became pope, Francis has been lauded publicly — officially praised — on no less than 60 different occasions by Masonic lodges all over the world. And the Vatican has failed to repudiate any of them.

This nexus between Freemasonry, homosexuality, satanism and political socialism simply fuels the believability of reports about a dossier and later documents detailing this. If this dossier or additional accompanying documents do emerge and bring this to light, the potential fallout would dramatically impact Pope Francis and his papacy because Francis received the dossier from Pope Benedict after being elected, and according to some sources, actually promoted some individuals named in the dossier.

If that is true and it all comes to light, it could have the impact of bringing down the entire Francis pontificate as newspapers around the world would scream out the most sensational headlines perhaps ever associated with the Church.

All of this is happening against the backdrop of increasing challenges to the Pope's apparent embrace of homosexuality, financial scandals involving the Papal Foundation with a shady $25 million deal pushed by homosexual predator Theodore McCarrick, whose career was resurrected by Francis, the announcement of at least two federal investigations back in the United States and charges that, while he was archbishop of Buenos Aires, he protected predator priests.

If reports of the dossier or other documentation is true, and they get leaked, a dossier revealing various prelates here in the Vatican are either involved in satanic rituals or are secret Freemasons in addition to active homosexuals, and Pope Francis has known this, it's difficult to imagine how he and his favorites could survive.

Rome is always full of rumors and rumors about rumors. But sources tell Church Militant the content of this is solid and reliable, and a cover-up of all this is ongoing.

For example, some Vatican sources have recently come out and completely denied earlier news reports from LifeSiteNews, for example, that a drug-fueled gay party even took place, much less arrests made and evidence taken.

But Church Militant has confirmed with sources here in Rome that this event did happen. The problem in Rome in chasing anything down is the complete lack of transparency as well as institutional secrecy in which everything is cloaked.

It's why the testimonies of Abp. Viganò — now completely attested to and verified — have been so incredibly explosive and revealing.

They have drawn back that veil of secrecy and given people a look behind the scenes at how sexual and financial corruption can run wild in such a climate of little accountability and transparency.

Almost everyone asked about McCarrick, for example, except multiple cardinals lying through their teeth, say they had heard "rumors" about McCarrick. Those rumors turned out to be true, and the evils were allowed to continue because of this normal Roman atmosphere of skullduggery and secrecy.

We will stay on top of this story and bring you what we know as soon as we learn more. 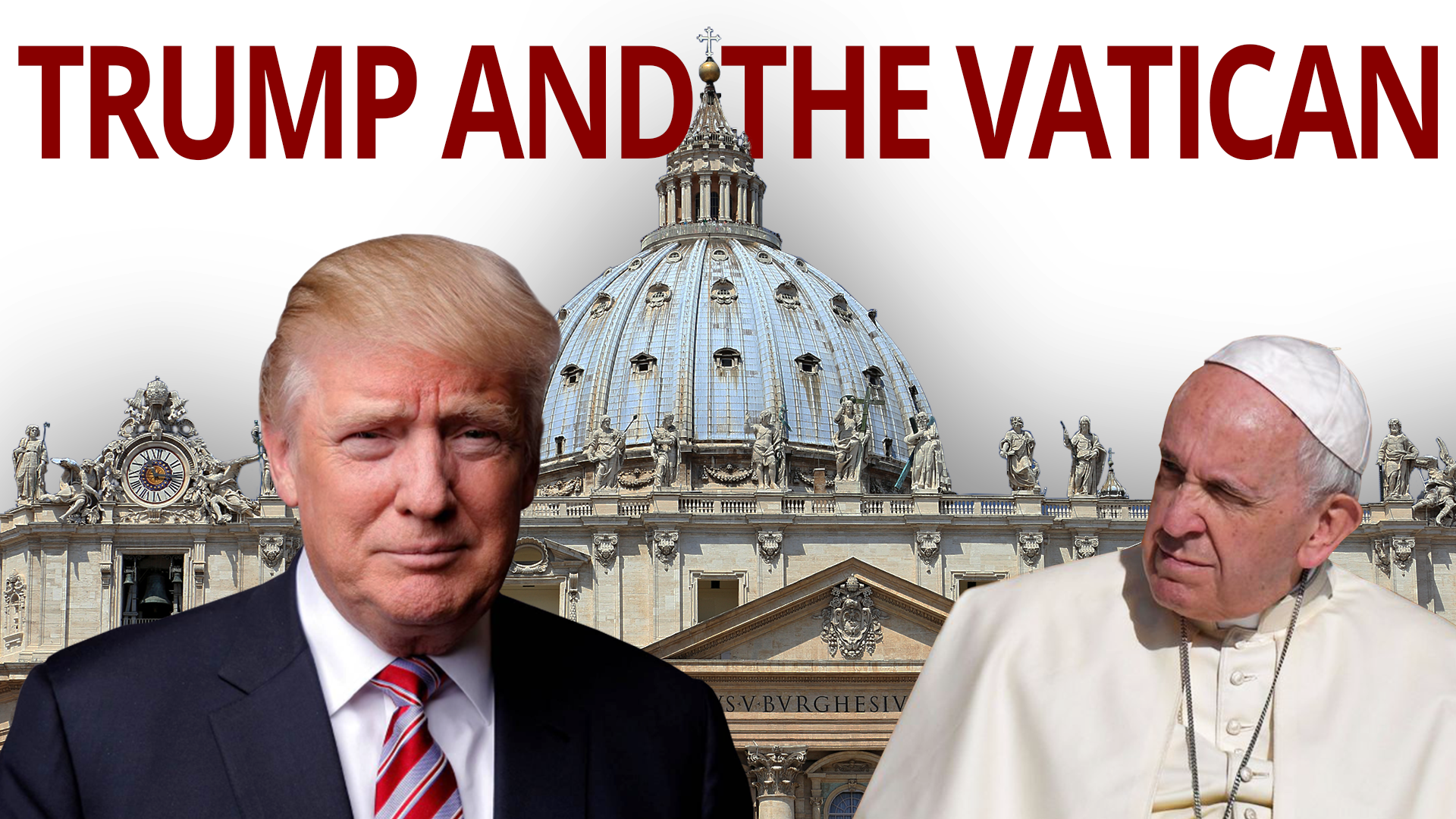 Trump and the Vatican
Trump is Rome's public enemy number one.