As the advance team of bishops of the United States begin arriving in Baltimore later this week to prepare for the full meeting next week, it's important to step back and survey the current situation.

First, as a reminder, Church Militant won twice in federal court, and the Bishops: Enough Is Enough Rally is a go. That means all you have to do is just click on the provided link and reserve your seat. When the city, conspiring with the bishops, pulled the plug on all this back in August, we had over 2,000 attendees registered.

Let's get even more than that now to show the city (but mostly the bishops): Your plotting and scheming doesn't work. And by the way, bishops, thanks for the truckloads of free publicity and advertising your rotten actions have earned us. Much appreciated. We couldn't have done that without your help, so a great big thanks.

The USCCB has been nothing but a colossal failure since it came into existence back in 1966.

Meanwhile, turning to the weeklong meeting itself. There is so much wrong here, it's impossible to record all of it. But perhaps a 60,000-foot view will help. No policy is ever developed that is not an expression of the people who produce it. As the old saying goes, personnel is policy.

So there is not a lot of room for hope when we look at the actual men inside the ballroom yammering and stammering on next week. The USCCB has been nothing but a colossal failure since it came into existence back in 1966.

Since that time, it has swelled into a giant bureaucracy — with a $200 million annual budget, most of which is used on lobby efforts to advance politically liberal garbage on Capitol Hill. It has not produced anything significantly clear about the Faith in decades (just look at its voting guide), nor has it accomplished a single action item that has advanced the Faith.

In fact, since its inception, the Church has retreated on all fronts, and the ensuing meltdown of the Faith has been the only evidence you need to see that this is a totally worthless organization run by at best incompetent, and at worst evil, men.

In fact, it's a mixture of both. So as they gather again to dither and blather and yammer and stutter, let's look at some of the males in the office of bishop who will be "shepherding" the faithful:

The list of these scoundrels goes on and on, each leaving a trail of victims behind them too numerous to count.

But there is one issue that needs stressing — it is the proclivity they each have to keep their legacy living long after they will have all been damned.

As we see in a slew of recent media reports, anyone who thinks the scourge of homosexuality that has plagued this group of bishops is going away anytime soon — think again.

The recent cases of homosexual conduct at the North American College in Rome, as well as the capture and arrest of Fr. Gregory Loughney of Scranton, Pennsylvania — caught on video trying to have sex with teenage males as part of a sting —proves the case quite well. The male who ordained Loughney (I hesitate to say "man" because men don't engage in this rot), is Bp. Joseph Bambera — known as "Bambi" because of his embrace of all things gay.

Yet, no matter what depths of depravity these males in miters sink to, they just go on and on — no challenge from so-called brother bishops; ignoring the cries of the faithful; tossing victims to their attorneys; limiting exposure; lying to the laity; stealing from the coffers to pay for all to be covered up.

The only recourse the faithful have is to do an end-run around them and expose their wickedness. In the case of Bambi, Church Militant has released a Special Report showing his evil and filth, specifically in the case of admitted child molester priest, Gregory Loughney.

As we go into the meeting of the "holy" shepherds next week, let's remember that personnel is policy. 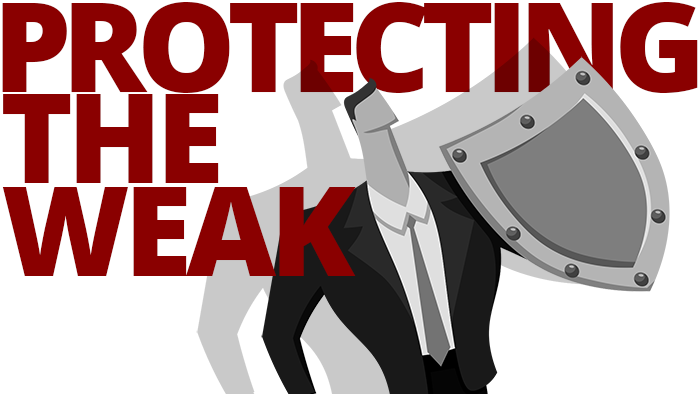 Protecting the Weak
The God of justice.