The Mafia is better than the hierarchy.

May 26, 2021  0
Podcast Available for Premium Subscribers

When news broke on Pentecost Sunday that Fr. James Altman was being gunned for by his bishop — the weak, ineffectual and divisive William Callahan of La Crosse — it could not have been a surprise.

Being divisive is a benchmark of a faithful Catholic because the world embraces sin and darkness.

We could get into all the theology of that, but the bishops don't believe in theology, so why bother? But they do believe in the world. They love the world. They love its politics, power plays, drama, endless disguises and deceptions. In fact, they relish in all that, and they especially love that they get to somehow appear above it all as the guardians of peace they fancy themselves to be.

All are welcome, as they say. Except their facade is a load of, well, you know. No, all are not welcome in their world of conniving, immorality and cover-up of child rape and theft of hundreds of millions of dollars.

When you've been doing this work as long as Church Militant has, you hear quite a bit. And when you do it every day and good priests email you and tell you what's really going on, you hear a lot. The same goes for when you speak to good law enforcement and when diocesan insiders feed you information, and seminarians let you know about the rampant corruption. The stream of information about these liars is like water coming out of a fire hose. It's powerful and endless.

Law enforcement folks have even said to us that the bishops are more corrupt than the Mafia. So when good priests are attacked by lousy, weak bishops — or better said, weak men who happen to be bishops — no one in the Catholic world can or should be surprised. The similarities between the world and the hierarchy are so screamingly obvious, you'd need to be dead not to notice.

You need look no further than the "Catholic COVID cult" and their adoration of all things Wuhan. The Marxist bishops are now forcing Catholics to get into two lines at Mass — the vaccinated and the unvaccinated. The next directive from the chancery will be a yellow star on the outer garment of all the unvaccinated and a special roped-off section of the pews, in the back, of course, marked, "leprosy/unclean, sit here."

We need to call a halt to this pretense that they are spiritual fathers. They are spiritual terrorists who use the Church for a comfortable life, to have homosexual relations or to lie and steal and cover up one scheme after another. In other words, they do whatever is necessary to crush the truth of their miserable, spiritually dead lives.

We need to pray for them, of course, but it is their victims who also need the prayers. News broke earlier this week that a predator priest in Massachusetts was about to be charged by the district attorney — not just with molesting a teen male decades ago, but with actually murdering him and dumping his body in the river. We say "about to be charged" because the priest died this past Friday.

The bishop at the time (Christopher Weldon) covered it all up. Of course, he had a great motive because Bp. Weldon himself was raping altar boys left and right. His evil is laid out in a giant lawsuit where the John Doe plaintiff alleges, among other things, that a former bishop (Mitchell T. Rozanski) engaged in a cover-up to protect Weldon's legacy.

Rozanski, of course, got promoted last year to be archbishop of St. Louis for his skulduggery, filth and cover-up expertise. This whole rotten network wrote the playbook the Mafia uses. Even the mob doesn't rape and kill children, cover it up, pretend they're holy and then go around silencing priests who want to help people get to Heaven.

Yes, the U.S. hierarchy is rotten to the core. We have Cdl. Dolan lying about virtually everything he says, including his role in the cover-up of the homosexual chancery in New York. There is also the notorious case of Fr. Peter Miqueli that made national headlines with his "gay-for-pay" activities; his leading role in getting active homosexuals celebrated in the St. Patrick's Day parade; his silence on eucharistic sacrilege; his shifting tens of millions of dollars around during his time in Milwaukee to shield it from sex-abuse victims; and, of course, his private letters to Catholic millionaires to attend a chic fundraising dinner where Catholic titans could hobnob with George Bush and Jay Leno.

This is what these men have turned the Church into. There isn't a drop of supernatural faith in them. Quite the opposite, in fact. They are entangled in child murder — not just of altar boys, but the preborn. They are involved in the theft and misuse of billions of dollars to protect their child-sex rings and homosexual lives and brother bishops. They pervert the will of God, the Word of God and the Body and Blood of God. And yet, they have the gall to go after good priests all over the country for being "divisive" and for inspiring hate against the hierarchy.

As far as being divisive, take a look in the mirror, bishops.

For the record, it would be really difficult for any priest to inspire more hatred against the bishops than what they have managed to inspire themselves. As far as being divisive, take a look in the mirror, bishops. It would be harder to imagine a scene with a more revolting countenance looking back.

This is why they loathe actual men, actual good priests: They look at them and know down deep who they themselves really are — repugnant, filthy, little men who cannot handle the truth, either hearing it about themselves or when preached about God.

One day a rain will come and, like their spiritual father Judas, it will have been better for them had they never been born. 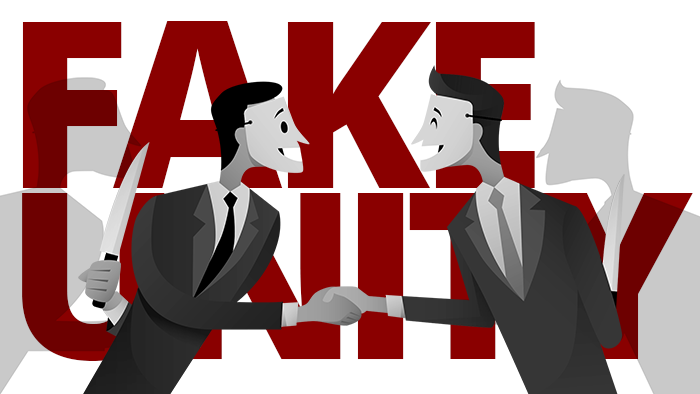