Everything is being exposed.

Just a brief programming note: Please remember that tonight, Church Militant will be airing our live, hour-long special "Campaign 2020 Overview" where we talk about everything at stake in this election. You can always count on Church Militant for the straight story with our usual spot-on Catholic analysis and commentary.

When Our Lady and St. Joseph took the baby Jesus to the Temple to do for him what was prescribed by the law — namely His presentation as the firstborn — they encountered the old man, Simeon, a devout and upright man.

At the end of the passage, Simeon pulls Our Lady aside and offers her a two-part prophecy — one about Her divine Son, the other about her. "This child will be responsible for the fall and rise of many in Israel, a sign that is to be contradicted": That was the first part and pretty obvious. The second part, however, is a little more mysterious: "And a sword thine own soul shall pierce that the secret thoughts of many may be laid bare."

In sum, she will suffer some great pain or agony, but the reason for it is so that the secrets men hold will be exposed to the world. Well, the source of her great agony was obviously being present at the foot of the Cross, watching the horrifying spectacle of the passion and death of her Son, beholding it with her own eyes.

The death of Christ becomes the focal point of human history.

But the very last phrase of Simeon's prophecy bears great scrutiny here for us in these days. The death of Christ, exposing Him for who He truly is — the Savior offering salvation — becomes the focal point of human history, that choice from which no man can escape.

Man must choose a response, since God offered man a choice. This is the very heart of the Catholic faith (which hearkens back to the Old Testament): "I have set before you today life and death. Choose life therefore that you may live."

Authentic Catholicism is what's on the ballot this November — a Christ-centered view of man and man's affairs, and every American must choose. And to not choose, is itself a choice.

The Catholic Church has a definitive word on all this and that word is final because the authority from which She speaks is that of Christ Himself. Of course, you wouldn't know that by listening to the silence from the hierarchy and complicit clergy.

Jesus Christ said of Himself, "I am the truth," which is the purpose and the end of man, to encounter the truth. On encountering truth, man, every man, must make a choice: Embrace or reject.

Truth demands a response, and that response is either embracing or rejecting. Of course, those who embrace still fall and fail. It's called sin. That does not mean they reject truth wholesale — only in a moment of weakness, like the Apostles experienced in the garden.

In their cores, they still embrace it. However, there are those who reject truth, but are clever enough to disguise their rejection, dressing it up as something other than rejection. In their hearts, they secretly harbor antipathy toward truth because it convicts them in their sin. So they agitate against it while concealing their hatred.

They conceal their hatred, that is, until circumstances arise that force their hand and bring them into the open, forcing them to unmask, so to speak. While the circumstances may vary, the underlying principle is constant: Truth stands at the center, and they must declare.

Authentic Catholicism is what's on the ballot this November.

They can't duck and weave and dodge forever. We are, today, in such times. The times have been brought about by the election of Donald Trump in 2016.

He has been used to expose the secrets of evil hearts — and now, people are choosing up sides because they have to. This same moment has replayed itself in human history since the garden and will until the last day.

One memorable time was when the Pharisees brought Our Lord to Pilate. They professed, in His presence, they had no king but Caesar. That was the moment that sealed their fate. Prior to that, for three years while Jesus was preaching and performing miracles, they kept their secret designs hidden.

They spoke openly with Jesus, called Him "rabbi" and so forth. Their secret desire to kill him they kept to themselves. It was only when He confronted them, when they were brought to the moment of truth, that the masks came off and their secret thoughts were laid bare.

He called them what they were, in truth. He called them the offspring of the Serpent — hypocrites, whitened tombs full of all manner of corruption. That was the precise call to their repentance, the moment of truth. They could either accept His judgment and bend the knee or choose the path they did, which was to kill.

Confronting with truth always — without fail — exposes the secrets of one's heart. An evil person can't hide from the truth forever. And it is only evil men that wish to hide from the truth. Men of goodwill embrace the truth, even when it hurts. 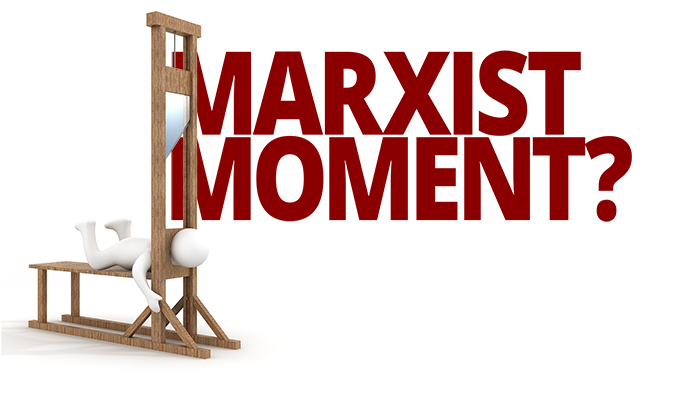 Marxist Moment?
It would be much more devastating than just abortion.