If there's one thing that is a hallmark of the corruption in the Church — a principal reason why so much evil has been able to set up shop within the hierarchy — it's all the secrets.

Archbishop Viganò called this out specifically in his first testimony, about how secrets, especially the much-abused papal secrecy, is routinely employed to get away with murder.

For the record, the papal secret is used to keep information being shared or revealed to an absolute minimum, and if a person who is bound to it breaks the secret, he is excommunicated and only the pope can lift it, hence "papal" secret.

Now, no one doubts in a multiplicity of circumstances, to protect people's reputations and so forth, the secret has its place. But it doesn't take much to see how some unsavory types could abuse it left, right and center to cover up their foul deeds in the name of religion. But aside from the high-level papal secret environment, bishops routinely keep all kinds of secrets for which there is, in fact, no good reason to keep them.

You leave me no alternative. Stick 'em up.

And in America, the idea of keeping secrets from people who have a right to know them — yes, we said a right — doesn't sit too well in a nation accustomed to transparency by leaders.

Heck, we even have a spate of laws from coast to coast referred to as "sunshine laws," meaning the information needs to be completely transparent and brought out into the broad light of day so everyone can see it. And what's more, decisions made and kept in secret are precisely where evil can easily be spread.

Why do people — Catholics we're speaking of — have a right to know much of what is kept secret from them by bishops? Because much of the foul deed-doing involves money, and the money comes from the people. The laity gives money trusting, and that's the only real accountability there is — which isn't anything really — trusting that it will be used for the purpose given.

But when trust has been broken, which it has been in spades with this collectively crooked lot of liars and thieves, then the laity have a right to know they aren't being ripped off. That's why there is now a class-action suit against the bishops' conference for the annual Peter's Pence collection.

The bishops gave the false impression (deliberately) that the money was going to Rome so the pope could distribute it to help the poor. But instead, it went to pay off mounting Vatican debts. That's called stealing, because you are being patently dishonest about what the money is being used for.

Likewise, in diocese after diocese, bishops take money from parishes, meaning — yes, a tax, annually assess an amount each parish must give over and above that tax — and if parishioners don't give the demanded amount, the bishop just goes into the parish bank account and actually takes whatever amount by which the parish fell short.

Can you imagine any other operation in the world where you are asked to donate, and when you don't, the group just takes it from you anyway?

You can imagine grocery stores' entrances all over the country at Christmas time, littered with bodies of shoppers who did not throw in the Salvation Army kettles and then got rolled by the bell-ringers as they took their wallets anyway.

"Please donate to us."

"Then you leave me no alternative. Stick 'em up."

But the bigger question is, where does the money collected go — the annual appeal of each diocese as well as the weekly tax on the collection plate? Those are two different bunches of money. And heaven forbid we divulge where the super collection campaign money goes — you know, the ones every three to five years for tens or even hundreds of millions of dollars.

No one denies there are legitimate needs and expenses. Of course there are. But to take the money and refuse to reveal where it goes is beyond the pale. And what's even more galling, to not think you should reveal where it goes — to have the attitude regarding the laity, "screw them, we bishops aren't required to tell them anything. It's a secret."

The homosexualist former bishop of Tampa-St. Pete in Florida, Robert Lynch, had a field day with the secrecy issue. Practically every major construction job the diocese contracted for was with a single company, David Herman Construction. Lynch apparently had a crush on the owner, David, and couldn't stop talking about his body — a well-conditioned triathlete body.

Aside from that being reason enough for him to not have been ordained in the first place, let alone be made a bishop, he awarded $30 million worth of diocesan work to his object of affection without ever seeking other bids.

He also gave David not just the customary 3% overage fee, but 10%. That's a whopping $2 million more than any other builder would have received. But hey, what the heck, it's not the bishop's money right?

In addition, however, to just the cold hard cash — millions, remember — David Herman also got all kinds of trips with Bp. Lynch paid for by Catholics naïvely sitting in the pews just filling the basket. While their hard-earned money was being freely donated, on the other end Lynch was just pulling it out, jet-setting around the world with Herman — to Israel, Rome and the gay-friendly Key West.

When asked about the no-bid practice once it all the information came out, the arrogant homosexualist, freeloading bishop with a thing for muscle-men answered, "It's my prerogative" — just apparently as it was his same prerogative to use Catholic collection-basket money to try and hush up a case of sexual harassment by him against a diocesan employee, Bill Urbanski.

Urbanksi, another reportedly good-looking, muscular guy — a triathlete — worked for Lynch until Lynch reportedly grabbed his inner thigh in a car ride. Yes, you guessed it. After Lynch grabbed his thigh, he had to reach into collection baskets all over the diocese and grab a hundred thousand-plus dollars out in settlement money.

They just let you think whatever you want, and they keep taking your money.

What is it, by the way, with these various bishops hanging around body-builders? Hmm.

Lynch if you remember, was the bishop who did nothing to help Terry Schiavo, as well as blamed the fire at the Pulse gay nightclub in Orlando a few years back on Catholics and others who believe in God, whom he accused of hating gays. Maybe he was upset because Pulse was one of his favorite hangouts, I don't know. He did take his good-looking bodybuilders to all sorts of gay destinations, after all.

But this isn't all about Lynch. He's just a glaring example of many more of the attitude among bishops that the laity can kiss their rings when it comes to knowing how the money is spent.

In fact, they don't stop with money. They won't even reveal which bishop votes for what at their semi-annual meetings. For example, almost 70 U.S. bishops voted that abortion is not the pre-eminent issue of our time. Yet good luck trying to find out who voted that way — it's a secret — to which we say, "balderdash." Catholics have a right to know if their bishop considers abortion the most serious issue of our day or not.

But see, they don't have to tell you. They just let you think whatever you want, and they keep taking your money and financing getaways with bodybuilders, or legal settlements for grabbing muscle men's inner thighs, or lawyers for hiding the truth from you on hundreds and thousands of matters you and I have every right to know.

Politicians have to publicly cast their votes because the public pays them. Well, we pay for the bishops, so why shouldn't the bishops' votes and their dioceses' finances all be public?

It's a whole new day. The bishops are not trusted and it's for good reason. Too many of them are active gays (or are at least supportive of them), or thieves or liars — and that's on a good day. And they certainly have no right to your money without proper disclosure.

You have a right to know, period. Where is your money going? How much is the diocesean staff at the chancery paid? How much are the legal bills — all of it? They need to come out with every last bit of it.

Any Catholic who gives any money to these men is a fool, and that goes doubly for rich Catholics who enable this world of organized crime. Apologies are due to all the mobsters out there who at least make an "honest" living dealing drugs and killing while not hiding behind religion. 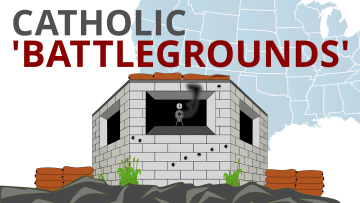 Catholic ‘Battlegrounds’
It's not national; it's regional.