The rise of the atheists.

So a Catholic, a Jew and an atheist walk into a Congress. It has all the ingredients of a bad joke, but this is no laughing matter for the faithful. Three U.S. congressmen — the Catholic Jerry McNerney from California, the Jewish Jamie Raskin of Maryland and the atheist Jared Huffman of California — are intent on destroying all elements of religion in American public life.

And their plan may play out a lot smoother than many people think. They each belong to an organization called Secular Democrats of America, and they advocate for expunging religion from all aspects of the culture (except in the privacy of your own home, at least for now).

These three U.S. congressmen have submitted a 28-page proposal to Joe Biden and Kamala Harris asking them to eliminate religion from American public life by "re-educating Christians" in such a manner so that they keep their "religious dogma" to themselves and within their own homes.

The atheists (or, as they like to call themselves, "non-theists") have long despised religion in general, but most especially Christianity.

Of course, if that comes to pass, they will have cheated like Hell, literally, to get to that point. But, hey, what's a little cheating to a man like Biden, who cheated his way through law school, plagiarizing a paper, which nearly got him kicked out? (Too bad it didn't.) And, as a quick aside, this is what happens when someone is allowed to get away with stuff because they aren't properly disciplined. Biden should have been expelled; now he's on the verge of becoming president.

But back to the main issue — there are two things worth noting here: First, the welcome reception such a proposal would receive, and second, how these three anti-God freaks have things completely wrong. Recall that Obama was the most anti-God, anti-religion president ever, especially when it came to Christianity.

He proudly announced to the world that "America is no longer a Christian nation." His entire administration, of course, was populated with staffers who hate religion and God and want it all swept away. Now, it appears those same people will be back, and this time with a venegence. When Trump won and they were all leaving their jobs, they had glum looks on their faces.

Well, they're back, and since everybody now knows where everybody else stands, "Let the flood gates open" will be their mantra. The SDA (Secular Democrats of America) announce on their website that the future of America is with the irreligious — those who have no religion and want no religion. They even have pretty graphics trumpeting this, where they show (correctly) that 17% of Americans reject religion and 70% of those are Democrats — not exactly news there.

The SDA also lay out their goal in pretty clear terms — the bad guys always do, just for the record. Scroll down a little bit and there it is: "No one has the right to harm others in the name of religious belief."

Now, while many Democrats in Congress and an incoming Biden administration may not be card-carrying, dues-paying members of SDA (although more than a dozen congressmen are), that agenda is embraced by a huge number of them. Recall that Kamala Harris just last year introduced a bill in the Senate saying the exact same thing. Of course, it got nowhere in the GOP-controlled Senate, but that's not the point.

It will get traction in the executive branch when it comes to those vast powers, and if the Democrats win those Georgia Senate seats, look out. A political party that enjoys the support of 70% of those who reject religion and God having total control of the powers of the federal government? Say no more.

And don't think you'd get a fair shake in the courts if you brought a case. "Fair" walked out the door in the aftermath of the election steal. Their refusal to pursue the vast fraud that this election was tells you everything you need to know. Most judges and justices on the high court have proven themselves to be nothing but go-along losers who find technicalities in the law or "judicial philosophy" to hide behind instead of stepping up and defending truth.

And even if they struck down some anti-religion agenda in some future hypothetical case, how long to do you think it would take the atheist, Party of Death to just pack the court to change the outcome down the road? Probably about 15 minutes.

The atheists (or, as they like to call themselves, "non-theists") have long despised religion in general, but most especially Christianity — even theologically deficient Protestantism because even a somewhat dim understanding of Christ does not allow for their immoral agenda of child-slaughter, unbridled sex, sodomy, destruction of the family and so forth.

So of course, they want Christians driven back into their homes. If you all want to pray around your fireplace, fine. But leave all that Faith stuff at the door when when you step out into our new America. Faithful Catholics might wonder, as all this is taking shape, just where are the U.S. bishops in response.

Don't get us wrong: Nothing would delight us more than to see the bishops stripped of the hundreds of millions of dollars they receive in federal money each year. They used that money over the decades to help create the social and political environment where atheists could actually come to power. So, good, take it all away.

The atheist Democrats are hiding their agenda beneath the veneer of protecting religion from government intrusion.

Some of that money even went to groups who worked to get Biden illegitimately elected — money from the bishops, just to be clear. Remember, about a quarter of U.S. bishops, maybe more, are Democrats. Don't forget that. They embraced the Democrat agenda because of the money they got and its support for homosexuality.

They hid all that under the disguise of "social justice," of course, but any Catholic with two brain cells to rub together knows that was always a ruse. They care about "the poor" about as much as they care about the Faith, which is to say not at all.

Sure they are. Sure their interest is in protecting Christians from government intrusion. Thanks, but no thanks. The God-haters are sensing their moment. Rightly or prematurely, they are sensing the wind is at their back and their moment has come.

Maybe they're wrong. But ask yourself this: When it comes to believers versus atheists, who do you think has all the momentum? A sufficient number of people — believers —did not step up when they should have. So now, there will be a price to pay for that. The only remaining question is, "If people didn't step up when the going was easy, how many will do so when it gets hard?" 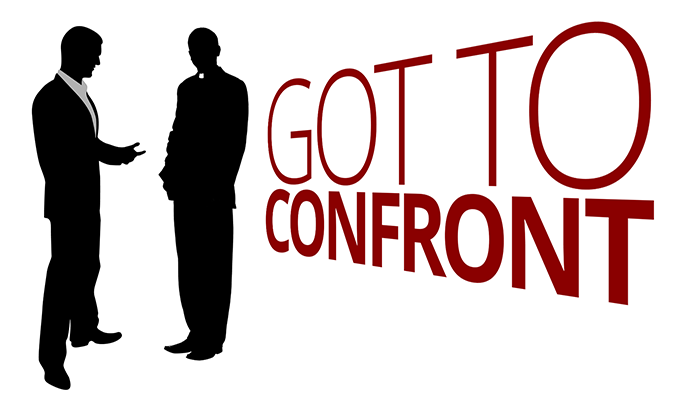 Got to Confront
Truth deserves witnessing.