You may not have heard, but the U.S. bishops are all hot to trot on their so-called Eucharistic Revival.

So the most unmasculine response possible from the charitable, homosexual crowd in miters was what else? Launch a three-year, $28 million public relations campaign to proclaim the Church's teaching around the country in the dwindling number of parishes but — and this is the really important part, the key ingredient — actually do nothing to demonstrate the belief it is promoting.

The bishops as a body do not believe in the Real Presence.

In fact, let's keep those faith numbers low, as low as we can, by not actually doing anything to promote the teaching — you know, as in showing people we mean business. Kind of like, oh, I don't know, forbidding reception by big-name child-killing Catholics. That might be a good place to start, but, oh no. That would be a bridge too far for the all-are-welcome, let's-be-gay-together crowd at USCCB headquarters (might as well be a hippie drum circle)!

And if you think that's a little harsh, consider the following: In West Virginia, the town of Bridgeport, actually, and All Saints Parish, specifically, we have an up-close look at the bishops' Eucharistic Revival. The parish is combining the Eucharistic Revival events with its 75th-anniversary festivities.

So in celebration of both, the pastor, Fr. Jagela, invited Bp. John Stowe of Lexington, Kentucky, along with his diocesan coordinator (of all things gay) to talk about welcoming everyone. Seriously though, who else would you invite to talk about the need for belief in and worthy reception of the Body and Blood of Our Lord, other than a bishop who promotes sex between men? I mean, come on, man!

And remember, Stowe is a bishop — one of those who are promoting the Eucharistic Revival like, supposedly, all his brother bishops. Let's get real about this, shall we? The bishops as a body do not believe in the Real Presence. There is simply too much of a disconnect between their actions and their words. You could in no way believe the Host is actually Jesus but then refuse to defend His Real Presence from sacrilege. No way, José — not possible.

And they get away with their unbelief because Catholics don't believe. Most Catholics don't even care. This whole meltdown is kind of a vicious cycle. The bishops lost the Faith. They ordained men to the priesthood who don't believe in the Faith. Those priests destroyed the Faith among the laity. The laity then sent fewer men who believe to seminary — who then got ordained, were made bishops, embraced gay crap and the wheel goes around and around.

They get away with their unbelief because Catholics don't believe.

So exactly who really thinks this Eucharistic Revival will accomplish anything? A gay bishop goes to a gay parish to promote its 75th anniversary (the last few decades of those 75 years being spent in gay heresy and apostasy) and along the way promotes the truth of the Real Presence. Seriously? This is absolutely nuts. This isn't Catholic, not even close — no how, no way.

Might some tiny modicum of good arise from the giant three-year, $28-million dog and pony show culminating in Indianapolis in a couple of years? That's not the point. As long as the bishops refuse to embrace the truth of the Faith and do everything required of them, don't expect any of this to turn around. How can it? 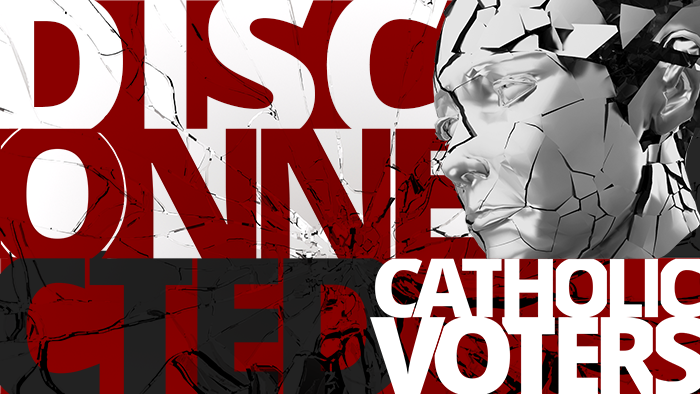 Disconnected Catholic Voters
More disconnected from the Faith than politics.