But the truth will make you free.

One of the pleas coming from some good bishops in Baltimore to the faithful were to make sure it didn't appear as though the laity were attacking the bishops, making the bishops out to be the enemies.

As events have been unfolding for the past few months, perhaps it would be better for the bishops to speak to their brother bishops and tell them to stop demonizing the faithful. The depth and increasing frequency of attacks against the faithful from various clerics is shameful, but very telling.

The latest example is Cdl. Wilfrid Napier of Durban, South Africa actually tweeting out an attack against EWTN host Raymond Arroyo, comparing him to a vicious anti-Catholic Northern Irish Protestant minister from the 1960–70s.

“The World Over” hosted by Raymond Aroyo is like a throwback to the 1960’s & 70’s, when Ian Paisley & his ilk were fulminating against the Catholic Faith in general, & Pope Francis in particular! I’ve still to hear a programme that does report negatively on or attack the Pope!

Yeah, you heard that right. Raymond: a devout Catholic deeply concerned about the Faith and the direction of the Church under the current tyranny of the homoheresy and all that it has spawned routinely covers the current chaos. Napier, trying to earn goodie points with the Vatican cabal, doesn't think twice about slamming Arroyo for his truthful comments. All we can say is welcome to the club, Raymond — come on in.

Last summer, the Vatican lashed out against us here at Church Militant by name.

Cardinal Dolan has me forcibly ejected from the St. Patrick's Day parade for asking him for an answer as to why he pushed for active homosexuals to be allowed into the annual parade.

Buffalo Bp. Richard Malone twice threatened to call the police on the crew and me for just asking him about protecting sexually abusive priests and lying to law enforcement.

Cardinal Daniel DiNardo accused reporter George Neumayr of not loving the Church for his reporting on the scandal.

Father Thomas Rosica made sure Church Militant was refused press credentials at the Vatican for reporting the same.

And Fr. James Martin routinely launches attacks against us and various other faithful Catholics for calling him out on his homoheresy.

Lots of things happen to lots of faithful Catholics in their pursuit of the truth and exposing it, but since we have such firsthand knowledge of it in our own case, we've been liberal with the number of examples involving us because we know them — again, firsthand — to be perfectly true.

Heck, even the very popular much-adored Detroit-area priest Fr. John Riccardo told a close friend of mine that I was like Martin Luther and would end up leaving the Church — that was years ago.

So I'm Martin Luther and Raymond Arroyo is a fire-breathing anti-Catholic, along with many other faithful Catholics, for calling you-know-what on this lack of faith among the senior leadership of the Church.

Too much of the clergy lose any sense of reality when they get in the power structure. They think they can do and say whatever they want. They behave as though they are completely unaccountable.

They have created and continue to foster an environment of secrecy, lack of transparency and superiority where the faithful should just shut up, pay whatever money is asked for and never ask any questions — and certainly never question anything.

That attitude, rampant throughout the clerical ranks and enormously helpful to the wicked among them, has brought about the homoheresy and left sick men in positions of absolute power.

None of this has been able to be fixed from within the Church, which is why police keep battering down the doors of chanceries around the country. They'll fix it, one way or another.

What has Raymond's crime been that prompted a public slamming from such a well-known cardinal? That he wants the Pope to step it up and address the evil in the Church? Why is that so bad? Isn't that what St. Catherine of Siena did? St. Peter Damian?

In fact, it is only the cowards among the bishops who aren't doing that themselves. In one way, Napier is right. Neither Arroyo, nor us for that fact, nor any other layman should be saying what we are saying.

The bishops themselves should be saying it out loud and demanding a purging of the homosexuals and modernists in their own ranks. And if they end up being retaliated against by the homo current in Rome, then so be it, they'll lose their diocese, but they'll gain Heaven.

Saint Peter, 2,000 years ago, instructed leaders to not lord their power over the sheep. But lots of these men — loads of them, in fact — don't care what St. Peter said, what any part of Scripture says unless they can twist it to support some policy about illegal immigration.

Heck, as an aside, Martin doesn't even seem to believe Jesus is divine. It's clear that many bishops no longer have supernatural faith.

When lesser-known bishops are standing up in their conference meeting and asking if their brother bishops actually believe the Church's teaching, they are much closer to the truth than they may want to believe.

The answer is no, they don't believe — they haven't for a long time, if they ever did. What they believe is a matter for conjecture, but whatever it is, it absolutely is not the Catholic faith.

As this scandal continues to grow, more and more faithful Catholics, especially those who know the full truth, are going to have to make a choice.

That was after the final call of Abp. Viganò in his last testimony, a call to brother bishops to step forward and say what they know before they die and face the Judge.

So Church Militant would like to extend a great big welcome to Raymond. Come on in, brother. It's foul, it's fetid and it's fantastic fighting for the Faith. What you lose in earthly whatever, you will be richly rewarded for in other ways.

For all the "influential" Catholics who know about this, a word of warning: you're next. No one will escape this judgment of conscience. So will you prove yourself a man and embrace the truth at great personal cost or will you run away? Choose — say the truth. 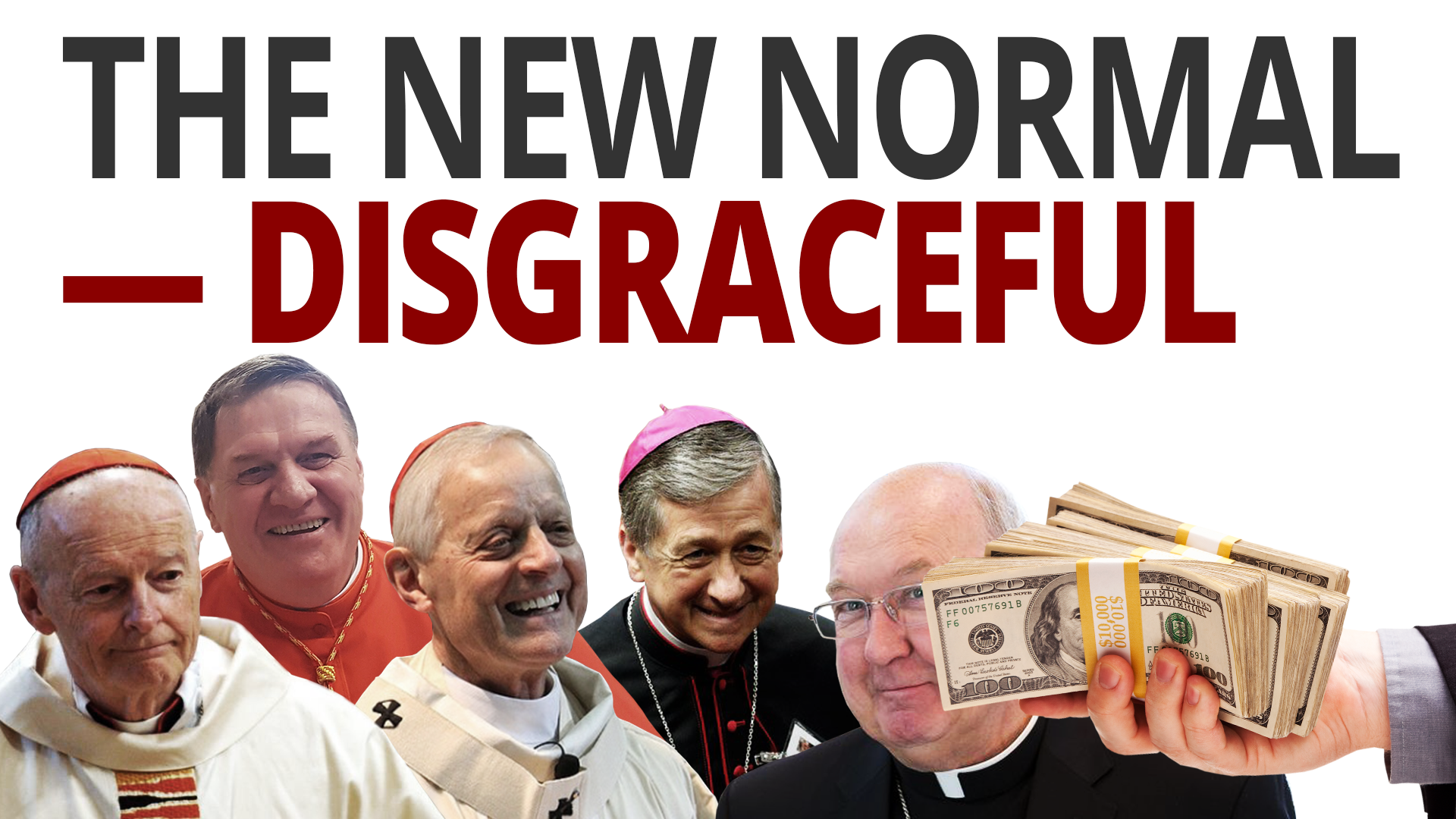 The New Normal — Disgraceful
The laity cannot accept this.