Shut Up and Obey!

For a pontificate seemingly bent on destroying clericalsim, even going so far as to blame the clerical rape of thousands of altar boys on it, they sure don't seem to be shedding the label as quickly as they otherwise could.

At the opening session of the U.S. bishops' Baltimore meeting this week, Papal Nuncio Christophe Pierre stood up and essentially threatened the hundreds of U.S. bishops in attendance, telling them to get in line with the "magisterium of Pope Francis."

But not stopping at just the bishops personally, he ordered them to get the message out to the sheep as well: There's a new sheriff in Rome these days, he essentially pointed out, and the duty of the sheep is to shut up and obey.

The old expression that used to apply to American Catholics was "pray, pay and obey." But in the era of Team Francis, we'll just get to the point: Shut up and obey.

As we look over the last week of business, it seemed like the U.S. bishops got the message, not that many of them would have needed much goading — not exactly the most testosterone-filled bunch in that swanky ballroom.

With the Church literally dissolving around them — 70% of U.S. Catholics refusing belief in the Real Presence, teenage Catholics practically unanimously abandoning the Faith, a staggering decline across all demographics — in the face of all of that, this gang considered the first agenda item should be to dredge up an old statement on gun control and have a lopsided vote on restating it.

And yes, we kid you not; gun control is the most pressing issue, as far as these men are concerned.

Then, of course, was the issue about exactly what is the most important issue facing the nation, the culture, the world. What issue could be the single most important one deserving to be ranked the number one concern, at least from a policy standpoint?

If you think abortion — the greatest slaughter, ongoing slaughter, in the history of humanity — would be up there atop the tally board, you’d be wrong.

Score another check mark for shutting up and obeying the “magisterium of Pope Francis.”

Then, of course, there were the elections for the new leaders, and frankly, you couldn't have found any more ideal puppets for offering no opposition to the Church going off the rails.

Los Angeles Abp. Jose Gomez, the leader of the annual Religious Education Congress in his archdiocese, was elected president. And Detroit Abp. Allen Vigneron was elected vice president, making him the odds-on favorite to become leader of the U.S. bishops when Gomez steps down at the end of his term in three years.

That pair is perfect, a perfect capturing of everything going on in the Church: Gomez and his annual parade of heretics and protestanized liturgy at the REC, and his wingman Vigneron, who continues to allow the gay Diginity Masses to go on in his archdiocese and has been the leading force among the bishops with pushing Protestant catechesis disguised as Catholic under the name of Alpha.

They are both the embodiment of what passes as “conservative” in the Church these days, an "anything goes" approach from Vigneron, up to and including heresy by Gomez.

And to this point, these men are both viewed as “conservatives,” which says a hell of a lot about how far the standard has dropped when it comes to so-called “conservatism” in the Church.

Faithful Catholics have almost always equated the term “conservative” with the term “orthodox,” borrowing from the political dictionary for use in the ecclesiastical world. But that approach is deeply flawed, mostly because it’s incorrect.

A given bishop may indeed be personally orthodox and yet his public approach and leadership be woefully lacking — and the point of being a bishop is to lead, not just believe.

And yet these men, practically to a man, wouldn’t know how to lead the faithful out of a bathroom with one door and no windows, much less to Heaven. But the wicked ones among them, in the United States and Rome, are experts at leading souls to Hell.

And if you think that’s unkind or overstated, consider the massive drop-off of the sheer number of faithful — those who reject out of hand the Real Presence, those who live in a perpetual state of mortal sin under a huge variety of circumstances, the scandal brought forth from pro-abort politicians being allowed to receive Holy Communion — how many various examples need to be laid out?

Do people really think that all these things are not willed by the Demon? These are the very things he works tirelessly to bring about so that souls will turn from the only path of salvation: the Church established by Christ.

So to not fight these things, to relegate them to second-class concerns or even completely ignore them — how exactly is that not doing the work of the devil?

The failure of the bishops to not speak out against these monstrous sins, to keep yammering on and on about gun control and climate change, neither of which they are correct about even politically — how could their failures not be weighed against them at their final judgments?

How could their failures not lead souls astray, which is a rather sanitized way of saying leading souls to everlasting fire, being forever subjected to the torments of demons?

But all that matters to this crowd of feckless men is to make sure there is never any controversy, no rocking of the boat, that no one is ever offended (except Jesus Christ), to keep spreading the spiritual poison that what matters is this world because we have a reasonable hope that all men are saved.

And given the result of this week’s Baltimore meeting, until this entire generation of these men is swept away, it’s blindingly clear that as a body, they do not have an answer because they are the problem.

Pray for them, absolutely, as we do here at this apostolate every day, but as far as shutting up and obeying their idiotic pronouncements on social policy — fat chance. 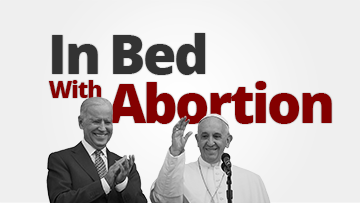 In Bed With Abortion
Rome and the UN.