What a bunch of weaklings.

Why do corrupt clergy get away with so much, be it sexual, financial, doctrinal or liturgical corruption?

That's an easy question because there are so many sideline Catholics. Sideline Catholics are the ones who actually go to Mass regularly and believe all that the Church teaches.

And at the end of the day, that's not good enough, not in this era in which the Church finds Herself.

They are largely engaged with the Faith intellectually, spiritually and devotionally, but when it comes to the necessary combat which must be engaged in, they are AWOL, preferring to keep their comfortable distance from the sidelines, refusing to engage in the battle.

In the end, they are cowards. They have delicate sensibilities and are largely conflict-averse.

They don't like, in fact, they have almost no stomach whatsoever for confrontation, and because of their weak-kneedness and wimpy personalities, clergy abuse is allowed to run rampant.

They go on and on about how much better things are in the Church regarding this evil but never stop talking about it and having listening sessions and conferences and committee meetings and training sessions and so forth.

They can't have it both ways; either it's all good now or it's a disaster that needs constant focus.

The focus the likes of [Bp. Robert] McElroy in San Diego and [Cdl. Blase] Cupich in Chicago keep shining on the issue is nothing else but a deflection from the real crisis in the Church.

The child sex abuse scandal was never more than a symptom of the much larger issue of faithless clergy over the past 50 years, many of them homosexual and most of them active.

These men and their supporting bishops have reined down terror on the Church, and these sideline Catholics have allowed it to happen.

These pewsitters don't want to engage in the battle, so to cover up their guilt they ignore the crisis or downplay or say that others, like Church Militant, for example, who talk about it and shout it from the housetops are overstating it.

To make themselves feel better, they retreat into piety, thinking that if they attend a reverent liturgy parish and say their prayers that nothing else is required of them.

Their little Catholic cocoon will one day be ripped open by the very bishops they refuse to combat now.

And why? Because their pious little pretentions are a target of these men. With only some exceptions, most of the bishops in the United States do not like the Latin Mass, for example, and a good number of them despise and loathe it.

It hearkens back to an entirely different understanding of the Church and Her teachings, teachings which these men have sought to undermine for decades.

They have tried and succeeded in protestantizing the Church, at least outwardly, and the result has been a mass falling away from the Faith.

They continue to admit and advance gay men, or emasculated men, into seminary, men who either believe the modernist notion of ecclesiology or simply accept that this is the way things are, and they go along.

Any priest who steps out of line soon finds his head separated from his body, the only use these days bishops seem to have for their crozier, because they never apply it to homosexual clergy of the James Martin ilk.

First, more than you might think; but more to the point, talk about either an uninformed question or a snide comment thinly disguised as a question. How many bishops support an effort is practically a meaningless issue today.

How many bishops support Catholic hospitals in their dioceses distributing contraception or the hiring of religion teachers who don't believe the Faith?

We could list 1,000 such examples and still not scratch the surface.

Frankly, any Catholic who would be groveling for support from such men should have his head and soul examined.

But the cowardly sideline Catholic crowd simply stick their heads in the sand on all this, meaning, at its heart, their faith is little else than selfish.

They care about their small orbit, and the rest of the Catholic world can be laid bare to the wolves in shepherd's clothing.

But wait, just wait for 20 years when their pious little children have grown up and suddenly the conflict-avoidance parents learn their little darlings have abandoned the Faith.

All their piety-heavy yet actionless Catholic life did nothing to produce the needed warrior mentality in their children, and once their children's friends and associates got done with them, they become nothing more but just another sad statistic.

All the mocking of outfits like Church Militant and other solid battle-hardened apostolates will have proven to be the only route to preserving the Faith.

What has gone on in the Church with these wicked bishops — whose support Church Militant wants nothing to do with — all that has happened has been aided and abetted by these types of Catholics who, in the end, didn't love enough to get their hands bloody in the fight.

They are self-deceiving wimps, cowards who you would not want with you in a foxhole, but have a sickening level of self-righteousness because they help out at the parish festival or kneel to receive Holy Communion — not good enough.

You don't get to pretend the battle must conform to your weak-willed personality because you like flowers and sweet melodies, ignoring all the suffering around you. And you are blind — and, frankly, stupid — if you think that suffering doesn't have you and your loved ones in its sights and is coming your way.

If you don't love enough to get off the sidelines, to get in the war, to do battle inside the Church — for this is where the only battle there is that matters — then you simply don't love enough, and taking cheap shots, in the name of piety, at those who do fight will not save you from the coming storm.

Get off the sidelines, and do combat like you were baptized and confirmed for. 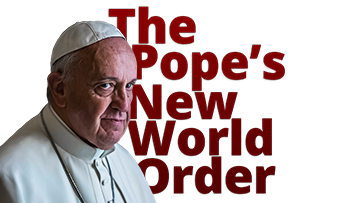 The Pope’s New World Order
Careful what you wish for, Holy Father.