Earlier this month, sirens went off all around the Catholic world when none other than Cdl. Robert Sarah made the clear and bold declaration, "The Christian priesthood is in mortal danger! It's going through a major crisis."

For years, Church Militant has been saying there has been a loss of supernatural faith among the ordained. They don't believe the Faith.

We have provided an ocean of stories to support that claim. In fact, it was the non-stop flood of these sorts of stories that forced us to come to this extremely sad realization. It's impossible, in fact, to reach any other conclusion. It's so impossible, in fact, that to remain stubbornly opposed to this conclusion bespeaks an arrogance or unwillingness to face the truth — that such a person actually becomes complicit in the crisis.

Facts are facts, period. It doesn't matter how you feel about them. What matters is that you accept a fact and organize your life around the truth of that fact. There is no other plausible explanation other than a loss of supernatural faith.

We must also hurt, in the body, in the temporal realm, and bear in our own flesh some pain of Calvary, for the priesthood.

And note this: Among mortal sins, we can make a differentiation. True, all mortal sins send a person to Hell. Die in that state and a soul is lost forever. But there are types of mortal sins. There are sins of weakness, of a momentary or passing nature that — while still putting you on the road to Hell — you can be pulled back from because a person knows their action is sinful. They don't embrace the sin as a lifestyle; they don't commit themselves to it one time after another after another, eventually accepting it in their hearts as good. They know it's wrong, evil and deadly, and while they did commit it, they bolt to confession. Their conscience is still intact.

But then there is the other type of mortal sin from which the sinner never really chooses to come back. Maybe at first, the first instance or couple of instances, there's some regret or contrition, but repeated falls and the conscience begins to dull — worn out from the non-stop rationalization. Such a man begins to not just sin mortally, but also to actually set his house up in a world of mortal sin, losing any real desire to return to a state of grace.

Not even the fear of Hell is sufficient motivation to get his house in order, and eventually, his fate will be what the Scripture says of him: "I will turn him over to a reprobate mind." God withdraws His grace because for such a sinner to continue to refuse to cooperate with the grace of God — the grace that God is extending him, to throw it back in His face — that itself becomes a whole new, fresh occasion of sin. So out of love for the sinner —for that is the only motivation God can ever act from — He ceases the graces so as to prevent the sinner from sinning even more.

So now, let's apply this to various members of the hierarchy — bishops who offer Mass in a state of mortal sin, not to mention priests who likewise offer the Holy Sacrifice in mortal sin, who add sacrilege to their list of crimes. At some point, a bishop who has embraced the world sets himself up as an enemy of Christ, steeped in mortal sin. Homosexual, vindictive, abusive, thieving, lying, arrogant, merciless —what do you suppose would be the fate of such a man?

What hope could there be for a man who, having once enjoyed the condition of high office, abandons it privately, in his soul, for lust or power or money, yet on the outside retains the visible trappings? It isn't that God doesn't want to save him. Our Lord always wishes to save them. But the tragedy is, they do not wish to be saved. They no longer believe.

And by their fruits you shall know them — those who rationalize distributing sacrilegious Holy Communion; who cover up the sin of homosexual predation — their own or others; who steal from the faithful; who lie to preserve their own positions; who refuse to reveal the truth of scandal in the Church and more importantly confess their own complicity in it.

Imagine a man dying in this state — a successor of the Apostles. How could anything but Hell be his lot?

In the Upper Room, Our Lord turned to Peter and warned him that Satan was demanding the Apostles from Him to "sift you like wheat." It is no coincidence that the demand was revealed in the upper room at the Last Supper, when Our Lord was instituting the holy priesthood. Satan wants the priesthood destroyed. The priesthood brings Christ down from Heaven to feed us His Body and Blood.

It is undeniable that he has made gigantic inroads. So to this end, we laity must appeal to the Queen of Heaven to intercede. We must unite our suffering to hers on Golgotha. Among the various realities of Our Lady's existence is that she is the mother of the High Priest.

She stood at his Cross, his Altar, willingly accepting sufferings to be united to His for the salvation of mankind. Her suffering is a model for us. We too must accept suffering, unite it to Hers through the High Priest for the sake of the priesthood. That's the key.

On this month's Retreat at Sea, we brought this particular point up with the hundreds of retreatants and asked them to find something important in their lives and give it up specifically for the priesthood.

We laity need to act, certainly — fight back, expose, instruct, educate, protest — all of that. But we must also hurt, in the body, in the temporal realm, and bear in our own flesh some pain of Calvary, for the sake of the priesthood.

So, please consider this request, seriously. Find something, whatever it is, and do it for the rest of your life. Our Mother suffered for the priesthood of her Son. We are her offspring. We too must suffer for the priesthood. It is in mortal danger. 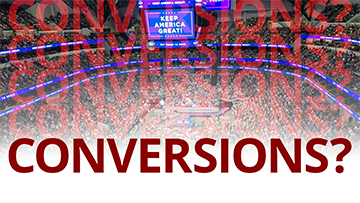 Conversions?
A person needs 'goodwill' to turn from evil to good.