This episode is going to get a lot of people's noses out of joint — to which we say: too bad. Here's the thrust: Why aren't the supposedly "orthodox" bishops opening their mouths publicly and loudly about the homoheresy in the Church?

Seems like orthodoxy means something significantly more than just saying and preaching good stuff. It also includes condemning the evil stuff. And there is certainly no shortage of evil stuff in the Church in need of public condemnation.

So allow us to frame the topic. When a bishop who has a little fan club sits silently on the sidelines in the face of, for example, the homoheresy juggernaut in the Church, just exactly how and why is he deserving of a fan club? Because he talks a good game when it comes to say, reverent liturgy? Because he is doing something behind the scenes quietly to straighten up his seminary? Because he is a popular internet personality and makes the rounds at various conferences to much adulation and swooning from sycophants?

Something is wrong — warped, actually — with the allowance given to bishops who have at least some touchstone to some kind of orthodoxy and yet do nothing publicly to battle the very public homoheresy in the Church.

Why the silence? The bishop supporters of sodomy certainly don't stay silent. In fact, they have diarrhea of the mouth when it comes to the topic. It doesn't seem out of sorts or disproportionate at all for the supposedly "good" bishops to say something every now and then. Yet they don't.

And let's get down to brass tacks here, shall we? Why does Bp. Barron get a pass on not publicly confronting the evil of sodomy being pushed aggressively by Fr. James Martin and the gay cabal in the Church? Why do his supporters who, in adoration before the Barron mystique of supposed intellectual prowess and savoir faire, not stop their applause for a moment and ask themselves, "Why does he say nothing about this homoheresy?"

The homo-heretics certainly say a lot, yet our hero strangely remains moot on this. Logical question, right? What could possibly be the motive for his silence?

And how about Abp. Sample in Portland, a much-beloved prelate for his advancing of the traditional Latin Mass?

Why would he not be willing to lay it on the line and get off the sidelines to condemn Martin's evil? Does he not think there are people in his archdiocese who are not having to deal with the carnage being created by the homoheretics?

And how about Bp. Olmsted in Phoenix, another "good" bishop who can't seem to find his voice in all this tumult. Or Bp. Conley in Lincoln, Nebraska, or Bp. Morlino in Madison, Wisconsin?

What is it about the current condition of the Church that compels these men, as well as others, to hold their tongues? Is there some intoxication liquid that has dulled their intellects and made them think that if they just keep saying nice, holy, reverent things that Fr. Martin and his evil will just wither away?

Why on earth would any of these men think that? Or is it some other reason not immediately apparent? Do any of these men, or others, have friendships that stretch back to their seminary days in the 1960–1980s with any of the homoheretic crowd that keeps their mouths shut out of a sense of misplaced loyalty or not wanting to cause consternation in the bishops' "boys club" atmosphere?

Something has got to explain their refusal to step up and fight this filth. And faithful Catholics — until they actually do stand up and put their necks on the line and commit — it's hard to see how we can applaud them as "good."

In fact, their silence has been a major contributor to all this evil. Evil pushes hard until it is pushed back against. The homoheretics are bullies, and the only way to beat a bully is to smack him right in the face. Yet they refuse to do so.

How many of all these men — and there are many more than just the ones we named — fail to realize that their sheep — the families and friends of their sheep — are falling prey to this vicious gay "theology"?

Do they not think they have a duty to step up and condemn the most virulent heresy of our day? If not, why not? Silence is unacceptable.

Perhaps they are concerned they will suffer, in an ecclesiastical fashion, the fate that many of us laity have suffered: Banishment from the public square of the Church, ridicule, lies, verbal abuse, etc. Is that it? Some cockeyed notion that if you open your mouths the hammer will come down and you will be removed or replaced, thus exposing your sheep to a "bad" bishop replacement?

Well, if that's the thinking, it's wrong. For a bishop to keep silence in the face of this rampant evil already makes him a "bad" bishop. The fact that he's not as bad as one of the others doesn't excuse the silence.

There's too much politics, too much jockeying, too much chess strategizing (thinking 73 moves ahead) in the Church these days among the supposedly "good, orthodox" bishop crowd.

Do any of these people's admirers not think they have a duty to just come right out with it and let the chips fall where they may?

Do the men themselves who have somehow rationalized their silence as a "good thing" not have sufficient faith that whatever happens to them for defending Our Lord and the truth of the Faith is their witness to the truth and glory of the Faith?

Why is it that lay people, with more to lose in this world, are willing and able to lay it all on the line, and yet the leaders themselves are always holding back, keeping something for themselves? That's uncharitable and unjust — and a massive lack of integrity.

They'll talk about various themes and topics to help restore the Church and ask the laity to follow that advice and instruction — which is almost always certainly good — but when it comes to a personal cost, they stop.

They may not want to offend fellow bishop friends who are gay, they may have a homosexual past they don't want exposed, or maybe they're afraid they will tick off the wrong prelate and their ecclesiastical careers will come to a screeching halt — or possibly a hundred other reasons, none of which is sufficient reason to keep their silence.

The troops, the faithful laity are out here battling this evil at great personal cost of finances, reputation and so forth. Yet there sit the leaders safely out of the line of fire, turning up the volume on their Gregorian chants and Pontifical High Masses and appearances on YouTube trying to appear all cool and relevant and reasonable, or thinking that some hundred-year plan to "fix" the seminaries will solve everything.

They need to get off their bishop thrones and get down here in the muck with the faithful and start speaking publicly — and yes, being lambasted as homophobes and haters in the secular media and attacked left, right and center for being intolerant and lacking prudence and all that usual idiocy.

Excuse me, Your Excellencies, the color of your office as bishop is red for a reason. You must lay down your life for the sheep, to the point of physically spilling your own blood if necessary. But you won't even risk your reputations, seeking to hide behind a facade of "orthodoxy" as your sheep are being eaten alive.

Orthodoxy means right teaching, and you don't get to pick and choose what part of the teaching you can comfortably push and what part you can avoid because it costs you. Get in the game, and come to the defense of the faithful few who are fighting.

A few years after you are all dead, no one will remember you because you did nothing to fight this monstrous evil. Your YouTube hits and your pushing of Latin will amount to nothing if you let souls perish on your watch.

Be fathers, and stop being politicians. 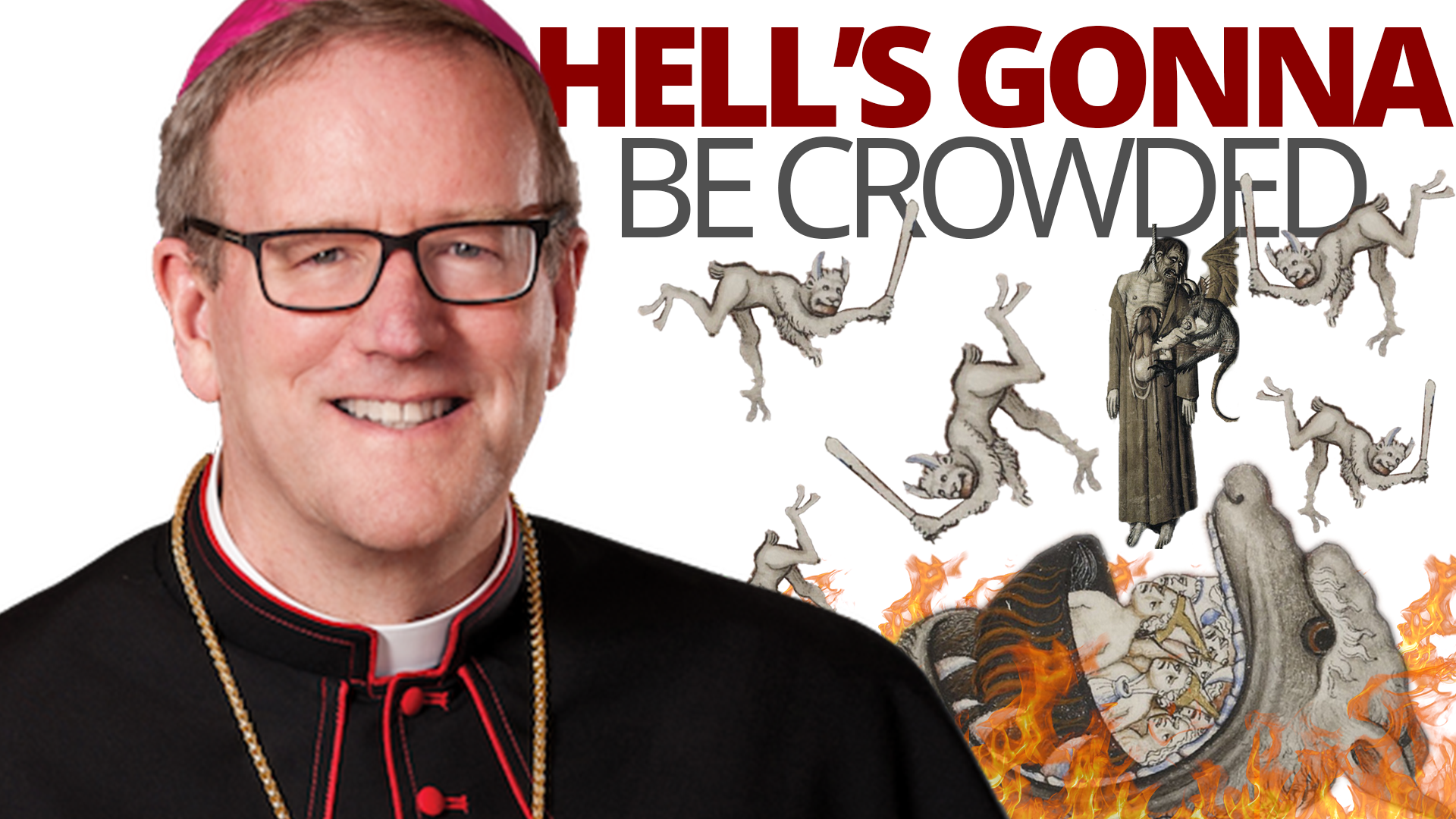 Hell’s Gonna Be Crowded
Especially with bishops and priests.