Now that Bp. William Callahan of La Crosse has staked his claim against a good priest — stripping Fr. James Altman of his faculties — the gauntlet has been thrown down. This crooked hierarchy means to silence all opposition toward it, concealing its evil behind noble themes like "obedience" and "silence." These mitered monsters have hidden the most despicable crimes behind the noblest platitudes and have gone unchallenged for way too long.

This past Sunday at Fr. Altman's former parish, Callahan sent an older priest to read a statement from him, throwing Fr. Altman under the bus by implying Fr. Altman is disobedient. After reading Callahan's statement, the priest then added a few of his own thoughts: "What we need, dear friends, is silence. ... Silence is the language of God. ... It will not be heard if we fill our minds with lots of explanations."

Silence and unity are precisely why the Church is in the horrid condition of being run by a corrupt hierarchy.

He exhorted the Sunday Mass crowd to not speak about this anymore, not engage on social media with it and not listen to any voices that keep the division going. "Turn to Our Blessed Lord in the Eucharist. It is the sacrament of unity and speaks powerfully to all conflict and unity," he urged.

That is a total cop-out, no matter how well-intended by the older priest delivering the remarks. Silence and unity are precisely why the Church is in the horrid condition of being run by a corrupt hierarchy. And how remarkable that an appeal should be made to the Eucharist when all bishops in America last year actually denied their flocks the Eucharist, not to mention every other sacrament as well.

Even to this day, multiple bishops still have draconian measurements in place regarding masks or jabs before you can come in the Church or regarding where you can sit or if you can receive on the tongue or which line you non-vax lepers need to get into.

Here's the bottom-line issue that way too many normal Catholics are ignorant about (and which is massively exploited by crooked bishops): A bishop is not God. He is not a monarch. He is not an overlord. He can't randomly issue orders or demands based on the fact that he is a bishop and then command everyone to obey them.

There are loads of things a bishop cannot order his priests to do as well as not do. And in the case of Fr. Altman, the fact that he was a pastor gives him a bevy of rights under canon law, rights designed to protect him against the capriciousness of a crazy bishop.

We just saw this exact thing play out in Rockford, Illinois with Fr. James Parker and Bp. David Malloy, who violated canon law by illicitly removing Fr. Parker from his pastorship. A thousand Catholics showed up to support Fr. Parker in a direct challenge to Malloy's overreach.

Meanwhile, the Vatican refused to pursue Abp. Allen Vigneron's phony case against Fr. Eduard Perrone in Detroit, meaning Fr. Perrone won. However, Vigneron has ignored the Vatican and refused to reinstate Fr. Perrone. And the same thing happened with Fr. Paul Kalchik of Chicago, who won his case in Rome against Cupich's injustice against him, though Cupich refuses to obey.

Bishops are not free to violate canon law, but they do it every single day, even in regard to allowing and promoting sacrilege of the Blessed Sacrament by defending the reception of Holy Communion by child-killing politicians.

Therefore, making an appeal to the laity to respect and obey is two-faced and hypocritical, a complete double standard. No wonder the hierarchy gets along so well with the Marxists in Congress. The phony appeal to pray and come to peace over the division so we can have unity is completely fallacious. There can be no unity with injustice at its center.

Father Altman has been unjustly removed from his pastorship, just as Fr. Perrone and Fr. Michael Suhy and Fr. Paul Kalchik have been. None of these men has experienced "justice" at the hands of the bishops. Then again, the bishops have allowed the Blessed Sacrament to be offended against, so why would we Catholics think they would be any different with their priests?

Silence is the absolute last thing we need at this point because it is an appeal to false piety and spirituality, something the bishops are masters at. Remember, that's what they did for decades as altar boys were being raped left, right and center. These men are sickening.

Well, we've had enough. This coming November, the U.S. bishops will be meeting in Baltimore, and Church Militant is once again spearheading the drive to call these hirelings to account. We are sponsoring a rally right next door to the Marriott where the bishops stay. We're calling our rally "Bishops: Enough Is Enough."

In the three years that have passed since we last did this, these men's evils are now well-known. Speaking at the rally will be Steve Bannon, Milo Yiannopoulos and Roman Catholic Faithful's Stephen Brady, to name a few. We will also be having a sizable panel of multiple priests and seminarians who will speak at length about the evils of injustice they have encountered. Father Altman will be one of those clerics.

Steve Bannon has some definite thoughts on this evil. Milo Yiannopoulos has some definite call-outs to share with you. Stephen Brady has been in the trenches with this filth for decades. And Church Militant may have a thought or two to share as well.

The seats in that pavilion are limited to a little less than three thousand, so please sign up right now and reserve your seat in the pavilion. Let's fill that pavilion and let this corrupt hierarchy know we are fed up — enough is enough. Come from every corner of the country to make your voice and presence heard.

To show just one example of how dirty these men are, when Church Militant did this back in the wake of McCarrick in 2018, the bishops had their water boy call the Baltimore Police and tell them we were going to storm the bishops' meeting and throw blood all over the walls. And we got that straight from the police captain's mouth.

These men are liars and enemies of justice, but they are always appealing to their phony religiosity to keep the laity in the dark.

These men are liars and enemies of justice, but they are always appealing to their phony religiosity to keep the laity in the dark. Enough is enough. Your filth and deceptions and appeals to prayer while you rob, steal and destroy good priests and cut off access to the sacraments is over.

Please sign up today for the sake of justice and true unity in the Church. 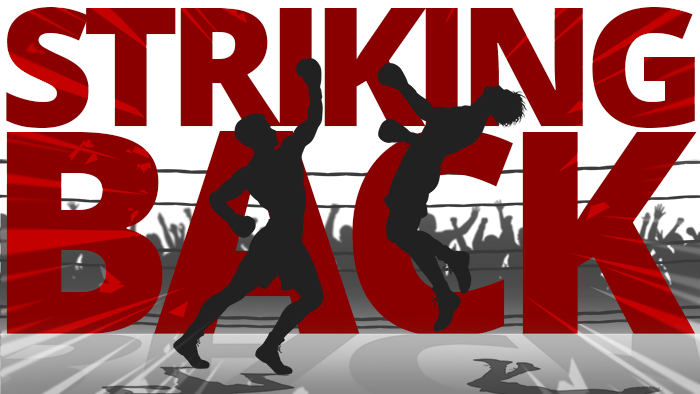 Striking Back
It's what criminals do.