Something's got to give.

The fall is approaching, which means the election season is in high gear, and the kids are all back at school, firmly ensconced in their clasrooms. And that means the sissy culture is in full swing once again.

All over America, juveniles in high school and college are being fed all kinds of garbage about how God is unimportant, religion is irrelevant and all that matters is them. Voters coincidentally are hearing the same thing; they're just hearing it through a series of highly produced, very expensive campaign ads and media buys.

The entire nation has become a culture of sissies, each person taking offense at every little thing they possibly can — real or imagined (mostly imagined). On college campuses, so-called safe spaces are set up for the truly sissified, where they can go and cry and be protected from big, nasty, conservative meanies calling the bluff on their idiotic culture of self-weaknesses.

How dare those dominant Christians call homosexuality a disorder, or transgenderism a psychological issue that causes major damage? Those big, mean ol' nasty pro-lifers are so harassing with their billboards showing the handiwork of the butchers at Planned Parenthood that the poor, little, defenseless supporters of child murder need a "safe space" to run and hide and be free from being offended.

College campuses are supposed to be places where free exchange of ideas happens as the staple of activity, the main thing that goes on — you know, where little Youtubing, completely self-absorbed, Facebooking children in young adult bodies can have their worlds shattered by having competing ideas presented to them.

An idea, like, say, for example, “You aren't the center of the universe"; or how about: "There's more to life than your sexual gratification"? Or how about: "God still exists, and so does Hell. Be careful you don't end up there"?

You can hear the stampede right now to the safe spaces from the sniveling crowd. "You hurt my feelings." Believe it or not, some of these collegiate safe spaces actually come supplied with coloring books and blow bubbles — you know, for soothing those rattled nerves and injured psyches. And we aren't kidding.

How much more stupid does this culture have to become? How much more accommodating to the lowest common denominator — meaning the loudest crybaby in the bunch? But then again, this should all be expected. It's exactly the attitude fostered by the Democratic Party and its fellow travelers for the past 30 years now: complete centeredness and self-absorption; always portray yourself as the victim until you actually believe it.

Ask not what you can do for your country, but how much you can get out of the government in the form of money or fake rights made up out of thin air. The continual feeding of the infantile mindset, right up to the completely idiotic transgender bathroom stupidity, which the U.S. Supreme Court is going to be hearing and ruling on (yeah, the U.S. Supreme Court).

Who wants to live in a country administered by egotistical, loathsome tyrants like Hillary and Gang? Who wants to hire children with college degrees who took classes and majors in feminism, sexual identity and gender roles and the philosophy of Star Trek? Actual classes, folks, no kidding. I mean, why should a student be forced to sit through a logic class and learn about first principles of reason when they can take a class on Lady Gaga?

This has gone beyond nuts. It's completely off the reservation — and it's all owing to the coddling that many of these sissies received in their even younger years. It is forbidden these days on huge numbers of college campuses to challenge any of the prevailing liberal orthodoxy of pro-gay, pro-child murder, pro-transgender.

These are echo chambers of liberal thought, cesspools of mind-numbing propaganda where the ability to actually think is sucked out of you and replaced with a recording that plays over and over: "I'm the most important person in the world; don't hurt my feelings."

The sissy generation is going to have a rude awakening in one of two ways: Either they will graduate still believing that their inflated grades and worthless majors actually mean something, but will get it hard in the face when they can't get hired or stay hired. Or there will be enough of them in numbers that the country and the economy will collectively collapse under the weight of their tears, complaints, diapers and coloring books.

Everyone is so easily offended by anything these days. Get a life. Yet something of this insanity is resonating in some fashion with the voters voting for Hillary. And among Catholic voters, a majority are supporting her. So here's further evidence that something has gone very wrong in the Church. Not only are Catholics going along with the culture, but the culture itself has turned ridiculous. 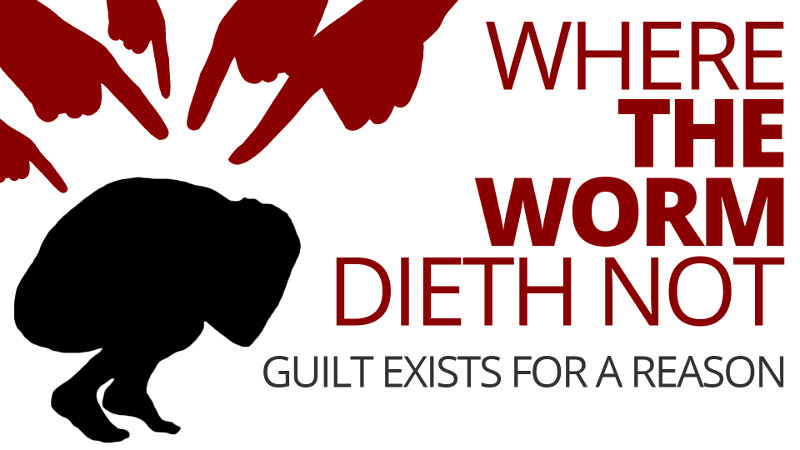 Where the Worm Dieth Not
Guilt exists for a reason.