Aimed at deliberately deceiving you.

Let's start with the good news. Bishop Fulton Sheen's body is going back to Peoria so that the canonization effort for him can finally move forward.

The New York state courts ruled against Cardinal Timothy Dolan and his three-year pursuit to thwart the move, even making him pay $100 in court costs for all the bother.

But what's a hundred bucks after the hundreds of thousands he spent of faithful New York Catholics' money in trying to stop the process by constantly appealing — and losing — five different times before finally exhausting his legal pursuits.

The three-year bitter battle is over, Dolan lost big time and Bishop Sheen's earthly remains will soon be going back to his boyhood home for the cause to move forward.

It was a good day last Thursday when the courts turned away the obstructionist New York archdiocese and Dolan with their high-paid legal team, a cause which never had any real chance of victory.

Which raises the question, why was Dolan trying to subvert the wishes of Sheen's closest living relative whom he dragged through the courts for years? Absolutely disgraceful.

And speaking of disgraceful, now to the second point of this Vortex. Catholic News Agency (CNA) reported the news just a little bit after Church Militant did.

And when you put the two stories side by side and pay attention to the content, you'd be hard pressed to realize you were reading about the same event.

CNA, a bought and paid for Catholic establishment media arm — which makes them fundamentally dishonest and untrustworthy because they only print information that won't get them attacked by the bishops whom they kowtow to — reported none of the relevant background regarding the case, supplied no substantial response from the diocese of Peoria and went out of their way to portray Dolan as a do-gooder whose only concern was to respect Sheen's wishes to be buried in New York.

We highlight this story in particular for you to show the extreme dishonesty and Pravda-like lack of integrity engaged in by CNA.

That article was a complete whitewash of all things pertinent to this story. It raised nothing, zero, not one point of what made this case so important.

For example, why is there no mention of what would amount to close to $1 million spent by Dolan in legal fees?

Why is there no mention of him repeatedly going back to the courts only to be shot down time after time, raising the question of why did he continue to throw good money after bad?

Why does CNA accept on face value Dolan's ridiculous claim that all he wanted to do was respect Sheen's wishes to be buried in New York? That claim by Dolan is duplicitous, but if you got your news about this from CNA, you would have been left in the dark.

Sheen had outlined in his will to be buried in a small little cemetery in New York, not under the high altar of St. Patrick's Cathedral.

Sheen's remains ended up there because shortly after he died, then-Cardinal Terence Cooke asked the family if they would override Sheen's wishes and allow him to be interred in St. Patrick's, which the family agreed to.

So right from the start, Sheen's wishes were overridden even before his funeral. So for Dolan to come along all sanctimoniously and declare he is just trying to follow Sheen's wishes is nothing but blowhard blather. Sheen's wishes had already been overridden.

And now the woman who has the say, Joan Sheen Cunningham, again chose to exercise her prerogative, and after having given her consent 40 years ago to lay aside his wishes and be interred under the altar of St. Patrick's, said she wanted his body transferred to Peoria.

But Dolan stepped in, broke an earlier promise made by then-Cardinal Egan that the remains would be handed over whenever asked for, and went to court, draining hundreds of thousands of dollars in the predictably losing legal melee.

Why is none of that in the CNA story, a story by the way which is unsigned by the "reporter." Does CNA not think those are important points? There is much more to this story than just the court ruling.

If it was just the court ruling, then the article could be just one sentence long: New York court rules Sheen's body can be transferred to Peoria — next.

This is fundamentally — and we want to stress that word — fundamentally dishonest to make the editorial choice to leave out pertinent background and essential information, to deliberately avoid asking questions or reporting facts that provide the actual context of the story.

No mention of the legal costs; no mention that the New York archdiocese is bleeding cash flow, millions every year; that Dolan is on an all-out assault to raise $200 million from the faithful, while at the same time he squanders close to a million in lawyers fees, and for what?

But understand, this is what you get from the Catholic establishment media — incomplete stories, nothing hard-hitting, fake news in respect to it never exposing the fraud of so many in the hierarchy.

The Catholic establishment media lives in the arena, makes its living in the arena of slanted coverage.

They have to. They don't want the Church Militant "treatment" by the bishops. God forbid they would muster some integrity and face the wrath of corrupt prelates who put bread on their table.

And don't think the Sheen court ruling story is the only example. Dear Lord, there are hundreds of such cases.

For example, a couple weeks back, the Michigan attorney general arrested five priests here for sexual assault, etc. Another priest, Fr. Larry Ventline, had his state license for counseling yanked for his lying to the public about his credentials.

Also listed as a reason were accusations that Ventline raped an 11-year-old altar boy in the sacristy of his archdiocese of Detroit parish on at least three occasions.

Of course, the statute of limitation unfortunately had expired before the case could be criminally pursued.

All of that was made public by the Michigan attorney general. Now, as a professional outfit that calls itself news — as in Catholic News Agency — don't you think such a staggering charge by the state's highest law enforcement officer would occasion a little investigative work?

You know, a thought rattling around in the head of the leadership of CNA like, oh, we don't know, something like, hey, if this priest might have been a child molester and had his state license yanked for lying and misrepresenting his credentials, maybe there's more to uncover here.

Church Militant had that thought. And we pursued it, aggressively. And what did we turn up?

As we previously reported, Fr. Larry Ventline was, in fact, a gay prostitute who took money from clients for nude massages he advertised for in local Detroit gay magazines.

That little nugget then occasioned further questions like, well, did the archdiocese ever know of this "activity"? Turns out they did, years ago. Every single auxiliary bishop was given a full report of it from a faithful Catholic lay group.

At the time, one of those auxiliary bishops was Allen Vigneron, the sitting ordinary in Detroit right now, today. He's been here as the archbishop since 2009. Yet, in 2012, with full knowledge of Ventline's "massage business," he appointed him his official spokesman for an ecumenical effort.

Was Vigneron thinking that, after the various meetings, the other faith leaders would be interested in a massage?

Why has CNA not covered this story? Is this type of gross negligence not at the very heart o the current crisis? Does this not connect some dots between the actual crisis and the homosexual nature of it?

Is there someone in the archdiocese that Vigneron doesn't want to run afoul of so he just leaves these filthy men in place?

Every one of those questions and many more should absolutely be asked by JD Flynn and the combined leadership of the Catholic so-called News Agency.

But they can't, and they won't — not without jeopardizing their exalted status as supreme episcopal brown-nosers who deal in deception. And this is the entire point of this Vortex.

Lying is a direct assault on truth by denying it. Deception is a subtle attack on truth by obscuring it and preventing it from being known.

Catholic News Agency cannot be trusted because they deceive, and they deceive to keep in the good graces of the bishops, who they cannot report the full truth about because they choose to keep you in the dark.

As the reality of the crisis and chaos in the Church becomes more widely known and discussed in the secular media, the Catholic establishment media will become less and less relevant, finding themselves between a rock and hard place, refusing to report all that the public is finding out from other sources because they cannot anger their episcopal overlords.

Just ask yourselves, why in the past few years have independent Catholic outfits like Church Militant become so well known and even dominant in some areas while the brown nose gang is more and more ignored?

Those who report must deal in truth or they fade away. 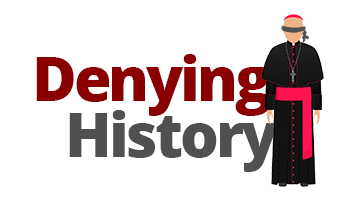 Denying History
Because it's their failed history.