And the smoke is getting pretty thick.

There's no doubt about it, no matter how you look at it, the ever-widening exposure of the corrupt gay mafia running the Church is now having an impact.

And it's no thanks to the complicity of Catholic establishment media who have deliberately avoided being straight up with the faithful about this filth for fear of ticking off the bishops and losing their meal ticket.

What now, however, is coming into the light is enough to make heads spin of even the seasoned independent Catholic reporters. In short, this corruption is much worse than ever imagined.

It's like a doctor who goes in for exploratory surgery to see how widespread the cancer is trying to determine how much of an operation will be needed.

He opens up his patient, takes one look and instantly closes him back up and recommends immediate hospice care. It really is that bad. There are examples of the rot and filth everywhere.

Just look, for example, at the diocese of Buffalo, where the lying, scheming bishop in charge, Richard Malone, is facing new calls for him to resign from his own seminarians.

Over the weekend, the head seminarian said essentially, "That's it. This is so corrupt, I'm outta here."

Good for him; any honest bishop worth his weight in wanting to restore and revive the Faith would ordain that young, honest man tomorrow.

Malone, in a failed PR attempt to get out in front of the lawsuit filings, had the audacity to go on camera and publicly address the Child Victims Act.

Some abuse victim-survivors watched the lame announcement and were disgusted by the hypocrisy of Malone. One of the survivors said, "It's not worth anything."

You'll recall that it was Bp. Malone we caught up with in the Detroit airport last November and wanted to get some answers from him about his handling of the case of Anthony [Ravarini].

When he was 6 years old, Anthony says Fr. Dennis Riter forced him into performing oral sex. And what's key here is this: Seconds after the incident, Anthony came tearing out of the rectory office and was actually seen by witnesses who saw the bodily fluid on the little boy.

But none of that mattered to the diocese of Buffalo or Bp. Malone, who cleared the priest and reinstated him without interviewing the witnesses — so much for investigating yourselves.

And for the record, there is more than one accusation against Riter, who Malone reinstalled as pastor.

And for more insanity, the priest who headed up the Buffalo investigation and cleared Riter, Fr. Peter Popadick, was himself named in one of the lawsuits filed last week, accused of sexually abusing a minor, forcing Malone to have to remove him.

Between seminarians calling him out publicly and leaving, and the enormous number of priests he's now having to sideline as allegations against them pour in, you got to say, Malone has got to be the most arrogant bishop in America refusing to step down, and that is really saying something considering the competition.

And speaking of arrogance, we just have to shift south until we get to the diocese of Scranton and its homosexualist bishop, Joseph Bambera, who has overlooked charges for years against one of his priests, Msgr. Walter Rossi, on loan from Scranton to run the National Basilica of the Immaculate Conception in D.C.

Rossi has been called out repeatedly, as we noted in yesterday's Vortex for being flamboyantly gay, with fellow priest lovers and the whole shooting match.

But until the pounding and pounding of the story, again by the independent Catholic media, broke through, Rossi had full reign in D.C. and the tacit approval, turning of the blind eye by Bambera, who is a huge James Martin supporter.

An "investigation" of Rossi has now been announced, but he's still serving in his public capacity as a priest and rector of the Basilica.

Rossi is still a big dog with Catholic University of America, where multiple male students have said he has harassed them sexually and came on to them.

Speaking of the kiss-up media, they made a deliberate choice a year ago to completely ignore this story, perhaps owing in part to the reported family connection between the establishment media's Ed Condon and Catholic University's president, John Garvey — one big network protecting itself at every turn.

Then there's the case of the gay priests in the diocese of Paterson, New Jersey, who Church Militant reported after kissy-face pictures of them came to light.

Bishop Arthur Serratelli, a close associate of Theodore McCarrick, has left the gay priests in place, perhaps because he himself appears to be part of the corrupt gay mafia pointed out by Abp. Viganò.

James Martin is always good for taking a read of just how out of the closet these gay priests are getting, as he is the head cheerleader for the whole movement, and Martin grows bolder every day, distorting Scripture, hurling accusations against faithful Catholics and promoting sodomy as a gift from God while he denounces Church teaching.

It's all coming out, every last bit of it, and it needs to.

And again, it's no thanks to the establishment guys who call themselves the Catholic News Agency when they refuse to actually report actual news Catholics should actually know, all because they are completely compromised.

What's key here is that the filth is now bubbling up for all to see. It is undeniable, and its effects have been and continue to be devastating. Loss of faith, loss of souls, loss of patrimony, loss of declaring the truth.

And these are not isolated examples, nor are they exceptions. This is exactly how conditions in the Church are today — day-to-day operations.

A corrupt gay mafia, with one story after another now coming to the surface, because like a clogged, backed up sewer line, there's only so much that can fit in the pipe until it starts backing up and everyone sees it and smells it.

The Buffalo seminarian had quite the piece of advice, something that Church Militant has been saying for quite some time now.

Indeed, until the filth is actually dealt with — and that means the public recognition of and announced purging of homosexual clerics from the ranks — not one dime.

And on this score, the message seems to be getting through here and there.

In Detroit, for example, ground zero of the gay clergy infiltration decades ago, Abp. Allen Vigneron, who recently launched a nearly $200 million fundraising campaign, fired his chief fundraising guy last week under the guise of retirement.

Additionally, we are hearing that Vigneron is spitting bullets at how low donations have been and that even he himself, after telling his priests he would personally raise $20 million, 10%, has collected relatively next to nothing.

Restore the Faith, tell the truth and resign — and the money spigot will flow once again.

Until enough of you bishops admit the real crisis, this is not going away. Homosexual men do not belong in the seminaries, nor serving at the altar — period. 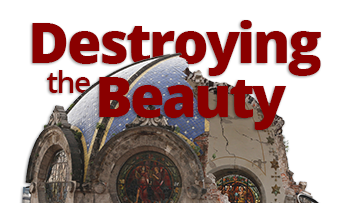 Destroying the Beauty
When will it end, Lord?