'Justice' for all is a lie.

The other day, I saw a T-shirt worn by a supporter of the old, hypocritical socialist Bernie Sanders.

Across the chest of the shirt was a classically brain-dead slogan which read in part: "College for all. Jobs for all. Justice for all."

And therein lies the problem with socialism and why the Catholic Church outright condemns it since it first reared its ugly head over a century ago.

Socialism pretends everyone is equal and somehow justice means everyone getting treated the same.

Nothing could be further from the truth. There is, of course, like all great lies, a little smidgeon of truth buried in the lie, which is what makes it have an appeal to the unthinking.

Everyone is the same as regards their human dignity being made in the image and likeness of God — and that's where it ends. After that, the idea of sameness or equality goes out the window.

It doesn't matter if you are talking about intellect, ambition, looks, creativity, physical strength — you name whatever category you want — there is virtually nothing you can point to where people are the same and therefore deserve the same treatment.

Of course, in an ideal and just society, everyone should have the opportunity for a job, to earn a living, to own private property and all that. But not everyone has a right to an actual job. That entirely depends on their ability and choices, which is ultimately what separates one man from another — the choices he makes.

But socialists don't care about that. They just like ginning up support for their idiocy by appealing to the emotional — not intellectual, emotional mind — that everyone is the same and everyone should have what everyone else has because that's fair.

Socialists mistakenly equate fairness with equality and then incorrectly label it all as justice. Fairness relates to opportunity, meaning providing an equal playing field for everyone to approach.

After that, it's every man for himself based on his abilities and choices. This is true not only in the natural world, but most especially in the supernatural world. It would be the greatest travesty of justice imaginable if everyone was admitted to Heaven.

Justice is specifically the giving to each according to what is due to them, not just everyone getting the same outcome.

In the case of the courts, for example, imagine every criminal, regardless of the crime, being given the exact same sentence. That's manifestly stupid, as well as gravely unjust. And if it's true on earth, how much more true is it in the next world?

Again, everyone should have a right at the chance to go to college, but the decision on whether or not they actually are accepted should depend on their academic performance and choices.

Did they do their homework? Did they study hard and make good grades? Did they manifest a certain level of determination to excel academically?

If not, why should they be accepted to college? Because an old, hypocritical socialist says so? Because his decidedly leftward lurching party says so?

Baloney — but see, spiritually speaking, the intellectual rot behind this cheap appeal to emotions is a further attempt to dislodge Western culture from its grounding in Catholicism.

The Church instantly recognized that a false belief that all men should be treated the same regardless of their choices was a direct assault on Catholic theology.

Catholic theology is built on the hierarchical order of the world. Different souls mount to different heights — or plunge to deeper depths — depending on how well or not well they cooperate with grace.

To try and paint the world as though everyone deserves the same outcome because that's somehow "fair" is to destroy the understanding that our choices matter and have consequences.

Know this: Every great political or cultural movement that dresses up a lie has as its author, Satan. Socialism is satanic because its aim is to disrupt the natural order so that the supernatural order will be obscured.

As an aside, if that was the case, why does Bernie think he's more fit to be president than any other American, which he obviously does?

Because he's a liar and hypocrite. He thinks he's a better choice — more qualified, a better candidate than any of the other child murderers in his morally bankrupt party.

The perfect retort to these peddlers of socialism is lay the ax to the root of their lie. Everyone is not equal in terms of their choices, not their abilities, and equal outcomes contradict not only common sense but also divine law.

As St. Paul tells the early Catholics in Rome, "God will repay each one according to his deeds."

Yep, we aren't all the same. We have different abilities and make different choices. And in the very end, some will go to Heaven and others will be damned. 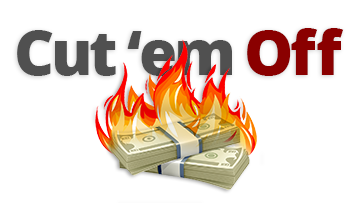 Cut ‘Em Off
Choke off the money.