As the machinations of various bishops in the U.S. hierarchy come to light, it's clear, in at least some cases, that we are dealing with sociopaths — sociopaths with croziers. While we'd like to take credit for that appellation, we have to bow to our good friends at the Cantankerous Catholic who came up with it.

However, it's worth expanding on because it's true. Multiple U.S. bishops so closely resemble sociopaths that it would be a grave miscarriage of justice to avoid the discussion. What is a sociopath, after all, other than a person with a personality disorder manifesting itself in behavior demonstrating a lack of conscience?

As such, they are capable of almost anything. Serial killers, for example, are sociopaths. Think Ted Bundy, for example. However, most sociopaths are capable of "playing normal," sending out signals and faking it as though they have a conscience. The end problem is that they believe anything they do is correct, regardless of who gets hurt or what happens as a result of their actions. In short, they are incapable of remorse, much less repentance.

The end problem is that they believe anything they do is correct, regardless of who gets hurt or what happens as a result of their actions.

Judas, for example, did have remorse. His damnation centered on his failure to repent of his treachery, not the treachery itself. But none of these sociopaths with croziers and miters ever exhibits the slightest bit of remorse, no matter who the victim is. In short, they are psychologically disturbed — and not just your run-of-the-mill psychological issues that every human has, to one degree or another, owing to our fallen human nature, but deeply disturbed.

Does anyone really think that there would have been the slightest bit of change in the raping of thousands of altar boys and sexual assault of seminarians had the Boston Globe not brought it all to light in 2002? Heck, even after that, it still goes on — just with the facade that the mitered sociopaths have actually done something about it.

In truth, it was law enforcement and many lawsuits that brought about the change. And even that is another sign of their pathology. It's called self-preservation. Not one single bishop in the wake of the McCarrick filth resigned over it or claimed responsibility or said anything beyond empty words. All of them claimed to be shocked and that they couldn't believe their ears.

These are not the actions and words of the remorseful, but of sociopaths. They felt not the slightest bit of compunction to own that mess for the sake of the victims. The suicides, the wrecked lives, the ensuing addictions, and, most of all, the loss of faith — not one bit of it prompted a single one to step down for his role in it.

In fact, after the secular media reports died down, they simply went back to their old ways; perhaps being a bit more cautious to cover their tracks, shred files, lie to investigators and so forth. But, nonetheless, nothing changed of substance. Whistleblower priests got shipped off to the nuthouses and had their parishes ripped away from them without a single exhibit of remorse. The homosexual crowd in the hierarchy, in fact, tightened its grip on seminaries and chanceries across the country.

And, as a note of interest, sociopathy is almost always accompanied by sexual deviance. Again, no conscience.

Somewhere back in these men's pasts (likely their childhoods or early adult years), something happened to them that twisted their minds. On that score, they are to be pitied and prayed for, but they should, by no means, be tolerated in their sacred offices. They are unfit for their sacred duties. They are, in fact, incapable of exercising their duties because their duties are built on the foundation of a conscience, and they do not have one.

They lie, distort, cheat, steal, suborn justice and, perhaps, in some cases, kill when their foul deeds are about to be brought to light. They are, in fact, lower than serial killers. Serial killers only destroy the body. These men destroy both bodies and souls. Think of the tens of millions of baptized Catholics who have left the Faith owing to the sins of both commission and omission of these dreadful men. Even for those relatively few Catholics who did remain, they even closed off the sacraments to them for months on end and now, in many cases, still continue to exercise their power trips by enforcing completely unnecessary rules.

They are to be pitied and prayed for, but they should, by no means, be tolerated in their sacred offices.

Sociopaths take pleasure in other people's suffering; that is why they have destroyed their consciences. After all, a well-functioning or even half-dead conscience couldn't actually willfully inflict pain for the sake of just getting jollies.

These men are zombies who can smile and shake hands and collect checks from wealthy Catholics at the drop of a hat. They are quite capable of being the best of schmoozers (think Heinrich Himmler, Ted Bundy and Theodore McCarrick). Every one of their victims was lured into their snare, charmed into becoming a victim. Yes, sociopaths with croziers. It's an excellent truism. 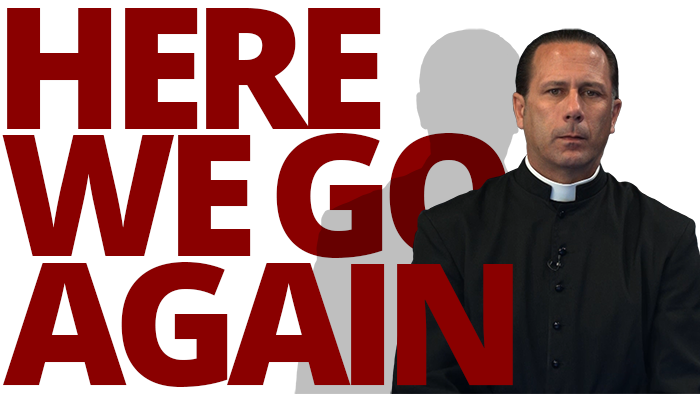 Here We Go Again
Attempt to cancel another cleric.