Something Sinister at Play

Just say it like it is. What's the problem?

Something is very weird at this Convocation of Catholic Leaders. There's a lot of confusion and disagreement among the delegates over exactly what the whole purpose of this is. Each day, we just sit in the lobby and wait for delegates to stroll out of the various sessions, and we just talk to them privately.

If you were looking for some unified interpretation of what's happening inside, you'd be hard pressed to find it. And there is a definite dividing line between those who are all caught up in the emotion of the event versus those who taking a more probing view of things. For example, the delegates, who are more concerned with the crisis and feel the fix is to return to our roots, aren't very impressed.

They oppose the whole lurch toward a more Protestant approach, which has been prevalent in the U.S. Church for decades but has become more solidified in the past, say, five years or so. They're telling us that the conferences are largely dominated by the language of theo-babble with the words — peripheries, encounter, margins, experience, meeting people where they're at — being used so much that a religious sister said privately that it was nothing other than verbal diarrhea.

Then there are others who seem a little less clued in on the depth of the crisis who are all excited about going to the peripheries and meeting people where they are so they can have an encounter. But when you try to nail them down on what does that mean, exactly, things become pretty vague, pretty fast. Different people have all kinds of different interpretations of it; and they don't seem to be getting any real direction in concrete cases. Even some bishops we've stopped and chatted with are kind of all over the map about what all this vocabulary means.

We've asked some more astute delegates what troubles them the most, and their answers have been that there isn't a lot of clear decisive language about saving souls and getting them to convert. Those words are offered here and there, but the vocabulary dominating the discussions is the mushy "theology of encounter" out on the "peripheries." And peripheries seems to have a very elastic meaning, but more importantly and worrisome, is that various delegates here seem very uncertain or unsure of what they're supposed to do or say when they arrive at the peripheries, wherever those peripheries are.

There seems to be an overall sense of Catholics need to talk to non-Catholics or former Catholics, but what they are supposed to say or, for that fact, what they are actually trying to accomplish in the discussions seems to be up for grabs. Some delegates were troubled that the very clear notion of the need to convert or revert to the Catholic faith for your salvation has not really been articulated in any meaningful way. The express doctrine of the necessity of the Church for salvation doesn't seem to have been brought up explicitly, at least not with any frequency.

And this issue, the necessity of the Church and adhering to Her teachings, seems to be the shaky ground issue because it's not entirely clear, which it should be at a conference like this. It's not clear that there is any real unity of that single issue, among the delegates or even the bishops. Some are clearly in that camp. No doubt about it. They're inside the conferences and the talks, and they are concerned. Others are just caught up in the event and the emotion of it and seem a little clueless about the larger issues.

And then there is a third group, also good hearted and well-intentioned, who seem to understand the problems in the Church and are yet unwilling to take that last step and grapple with the hard reality that this has all been orchestrated in such a way so as to deliberately have the Church in chaos. It's a very difficult reality to come to terms with, that there are some bishops who are perfectly content to use the language of inclusion and encounter and peripheries and meeting people where they're at in order to advance a decidedly uncatholic agenda. But that is the reality. For example, while this event was happening, the bishop of San Jose, Patrick McGrath, issued a letter essentially attacking Bp. Thomas Paprocki of Springfield, Illinois, who recently issued a letter of his own, instructing that practicing homosexuals be barred from the sacraments and without having shown any signs of repentance for their sins, be denied a Catholic funeral. Homosexualist Fr. James Martin savaged Paprocki in a tweet storm and then McGrath wrote this letter of his own.

Cardinal Donald Wuerl has had a looming presence here, and you will recall that he was one of the leaders at the synods in Rome, making sure that the language was as elastic as possible and non-judgmental sounding and all that. Wuerl has been one of the out front cardinals about okaying sacrilegious Holy Communions under the cover of all are welcome and inclusion and so forth. At the synods, he was front and center about promoting the theology of "encounter" and the need for a new vocabulary in the Church, which just happened to be more accepting of homosexuality and the gay agenda.

And of course, there has been the steady stream of social justice chatter about immigration and so forth. Not any real discussion about, for example, should divorced and civilly remarried Catholics be admitted to Holy Communion — seems to be a great big topic in the Church right now — so it's more than strange than it's not on the official agenda; I mean, talk about going to the peripheries. Why wouldn't that be on the agenda? Seems like it should be front and center, as a matter of fact.

Where's the solid discussion and pointers about meeting former Catholics on the peripheries of, say, the contraception issue for example? Where is the discussion about encountering these people and inviting them to fix their lives and come back to the Church or is that even really the goal of the organizers of all this? See, this is what we mean, there's nothing concrete, nothing solid here. It's all verbal blather and bluster, which never gets around to making a clear statement. In the end, no one we've spoken with, regardless of where they fall on the spectrum, has been able to really articulate what the precise point of all this has been.

When the 3,500 delegates leave here, what are they supposed to head home and do? We've spoken to quite a few of them, again, including some bishops, and we've yet to hear any kind of articulation on what's next. There's not really any concrete discussion or conferences on the meat of the Faith, just the need to go out and be missionary disciples, whatever that means, but about what remains cloaked in language of mystery.

The other somewhat vexing issue is this — the delegates at this event were personally handpicked by their respective dioceses, recognized for their leadership in various areas. It needs to be asked, how are these people leaders then, if they haven't already been trying to go to the peripheries and have encounters? What exactly have they been doing, ensconced in the chanceries and their various areas of work?

There are lots of questions coming from this event — lots! And the troubling thing is, there don't seem to be any solid answers — murky, unclear, make it up as you go along kind of approach but not much in the way of concrete. A more critical analysis of this very expensive gathering, which has raked in a lot of money, might go something like this: There has been a deliberate attempt to not be clear about very much — to keep the discussion ethereal and murky as possible so as to plant this loose vocabulary in the minds of various lay leaders so that they may carry this language back to their diocese and establish it as the new vocabulary. In that sense, it's been like a re-education camp — a massive theological sensitivity training seminar.

Many of the more simple folks here, to put it mildly, are being used by more clever people to prepare the ground for a more aggressive approach that will be coming down the road. An aggressive approach aimed at further watering down clear Catholic ideas, principles and teachings to make the somewhat more orthodox Catholic laity ready to accept sacrilegious Holy Communions to divorced and remarried and same-sex couples. It will all be ushered in under the guise of accompanying these people on their journey and meeting them where they're at and encountering them and so forth.

There is something sinister behind all this lack of clarity. Catholic vocabulary is very clear. It always has been. Lack of clarity is related to the diabolical. As we said to one bishop, why not just print up 100,000 Baltimore Catechisms and instruct the missionary disciples to teach the Faith using that language? He stopped and said, yes, you know, you're right. It worked for me. And then he shuffled off to the elevators.

It's clarity versus mushy vocabulary. And whenever there is a deliberate lack of clarity, something sinister is always at play. 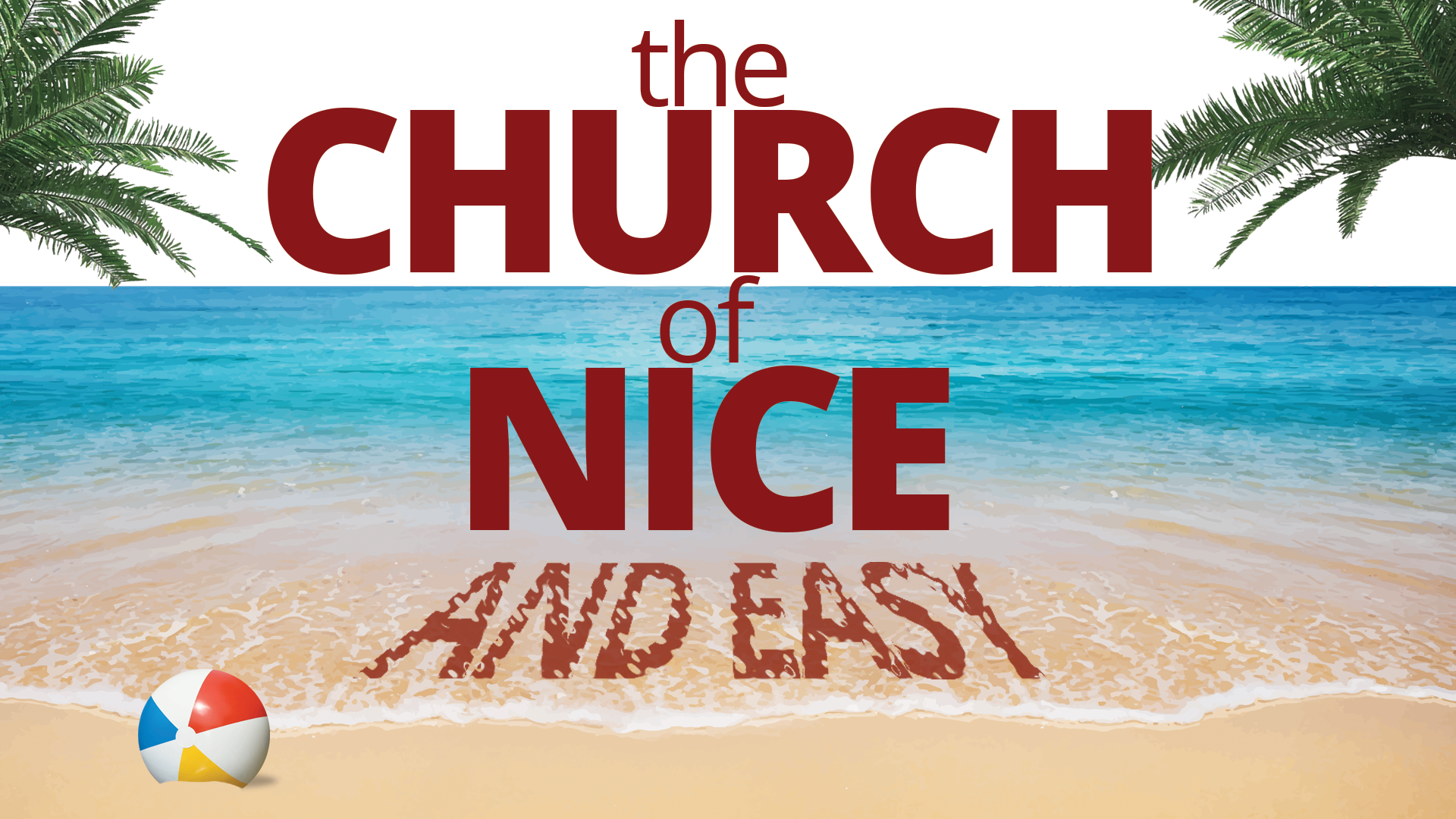 The Church of Nice (and Easy)
Love doesn't always win.