Something's happening in the Church, something like never before — you can sense it in the Catholic blogosphere. You can sense it in authentic Catholic media reports. You can see it and hear it when you read between the lines of the various denials of cardinals who say they knew and know nothing of the homosexual predator problem among their own ranks.

You can intuit it in the increasing stream of statements and releases coming from the offices of lesser-known bishops around the country. You can certainly sense it in the increasing chatter among faithful Catholics that they need to descend by the thousands on the bishops' annual meeting in Baltimore this coming November and demand that the senior leadership of the American Church resign — and the issue be forced by rank-and-file bishops.

You can feel something — a groundswell, a momentum, a sense — that the moment has arrived in the American Church where things are ripe for change.

Since McCarrick's outing, hundreds if not thousands have taken to posting their stories online, stories of being sexually abused and harassed by various clerics — and not just priests — while they were in seminary or college or working in parishes.

The entire homosexual clergy crisis in the Church is reaching a critical mass, and it's becoming more clear that the momentum this is developing will not be able to be stopped this time by lying and deceiving prelates, who, in fact, deceived and covered up even after their great theatrics in Dallas in 2002 after the homosexual clergy child sex abuse scandal erupted onto the scene.

Four things did not happen in Dallas.

First, the bishops exempted themselves from any oversight.

Second, they said nothing about protecting adults from sexual assault or harassment.

Third, they covered up that this problem was homosexual in nature — a crisis of homosexual men being ordained and climbing up the ladder to bishops and further.

Fourth, a mechanism for bishops to report each other that any of them took seriously.

Whatever came out of Dallas 16 years ago about protecting minors, what also came out was a giant loophole that allowed homosexual predator bishops to sexually assault and harass adult men — mostly seminarians — and no incentive for other bishops who knew about it to report it.

It is noteworthy to point out that — to this very day — almost a month since all this broke onto the scene, not one prelate has stepped forward to admit he knew — not one.

That none of them is even admitting knowledge of this, much less responsibility, tells you everything you need to know about the climate of secrecy, lies, lack of transparency and zero accountability that these live in every day. The homosexualist Cdl. Joseph Tobin made a comment a few days ago about homosexuality that "the Church would have to catch up to the world on this issue."

Well, that's ironic when you consider that when top leaders in other walks of life get busted for sexual harassment and covering it up, they get bounced — CEOs, Hollywood moguls, sitting U.S. senators, news icons, movie stars.

None of them were exempt from suffering the consequences of their actions, yet the senior leadership of the Church seems to think they are exempt.

Again, the most open "secret" in the Church was that McCarrick was sexually assaulting seminarians in his beach house the diocese of Metuchen bought for him, yet not a single man in the rank of bishops or cardinals has admitted knowledge of it. What their conspiratorial silence is accomplishing is a hardening of the laity demanding that the cardinals be swept from office.

Look at these numbers from a poll conducted by Church Militant. We are highlighting just a portion of the 6,000 responses received in just a few days.

88 percent said Cardinals O'Malley, Wuerl and Farrell are lying when they deny knowing anything about McCarrick's homosexual predation.

93 percent say various bishops and cardinals are going to have to resign because of this.

66 percent — two out of every three — say that somewhere between half to all of the bishops are homosexual or support it.

96 percent say the blame for all of this is at the feet of bishops for being so accepting of homosexuality.

84 percent say the bishops are not interested in fixing the problem and cannot be trusted to do so.

75 percent believe that bishops are more concerned about money and their prestige.

And perhaps most telling — a root cause of all this — 94 percent believe at least some bishops have lost their supernatural faith.

These results are devastating. It shows a total loss of faith in the bishops' ability to any longer govern the Church in America. To sum up these results, vast majorities believe a major portion of U.S. bishops are lying, money-hungry, prestige-seeking homosexuals who have no interest in fixing the homosexual problem in their ranks because they no longer believe the Faith.

Could you imagine a more damning view of the American episcopate than that? And yet, nowhere, from any bishop, has there come an acknowledgment that the real problem here is homosexuality. Here is a quote from an excellent article by Fr. Regis Scanlon which gets to the heart of the matter:

The presence of homosexual activity among bishops and seminarians was so widespread and connected, especially in seminaries, that it [is] impossible to believe that it was not known to many, if not most, of the bishops in the United States — especially to high-ranking prelates who deal with the daily affairs of the Church like problems in seminaries. Consequently, many are saying that the bishops who knew about this "homosexual predation" upon seminarians — and did nothing to stop it — should resign.

Increasingly, various priests around the country are thundering from their pulpits that the homosexuality among the bishops and seminaries must come to an end, that homosexual men should be swept from the ranks of the clergy and this evil must be brought to an end.

And still — still — in the face of this uprising and demand that they admit the truth and resign, we still get nothing but denials and meaningless statements about new policies and procedures.

The signals from the leading prelates is clear, we are gonna lie and deny, hunker down and wait for the storm to pass — that isn't going to work this time. There is too much attention on this evil, and with today's anticipated release of the Pennsylvania Grand Jury Report, some Catholics may very well be calling for a reinstatement of the death penalty for some of these clerics.

Very little could explain the complete and total tone-deafness of the bishops — especially the cardinals — other than exactly what huge majorities have concluded, too many of them are money-hungry, ego-driven, lying homosexuals who have lost their faith. Those same results are showing up in not just other online polls, but also in comment boxes, radio shows, social media memes — everywhere. And that means they have also lost the ability to lead. They can put together 1,000 commissions and issue a zillion new policies — no one believes the policy is the problem.

They believe it's the policy-makers and that those policy-makers need to go. If it were possible for a vote of no confidence to be taken against bishops — this would be it. This moment has been coming for years, and now it has arrived: Faithful Catholics no longer consider their shepherds trustworthy. That is an unmitigated disaster, and the only solution is that the leadership has to go — and go now.

Let's just say for a moment that they — all of them — the cardinals are telling truth and not a single one of them knew a blessed thing about McCarrick or the much larger problem of homosexuality within their ranks. The prevailing conditions then, in themselves, should also be enough to force them to resign because how could senior leadership allow all this to deteriorate to such an abysmal level? They need to resign for negligence, if not complicity.

The other point, almost 1,000 respondents said they are planning on heading to Baltimore to make their voices heard with the bishops at their annual meeting the week of Nov. 12. If it takes a gigantic demonstration of faithful Catholics to show up in Baltimore to effect change, then that's what it will be. And if thousands of Catholics descend on Baltimore demanding change, it will be a moment never before witnessed in the Church in America.

There should be a bloodletting inside that meeting and lesser bishops should be demanding the resignations of the entire cardinal contingent.

Father Scanlon has a point on that as well:

If this problem of rampant homosexuality among the clergy and seminarians is going to be resolved, it will be done by the good bishops speaking up. ... If the bishops are not willing to do this, then they should resign.

Indeed, the Catholic population of America is about to see if the good bishops are going to challenge the homosexual liars within their own ranks and demand they resign. The future of the Church in America lies in the balance. 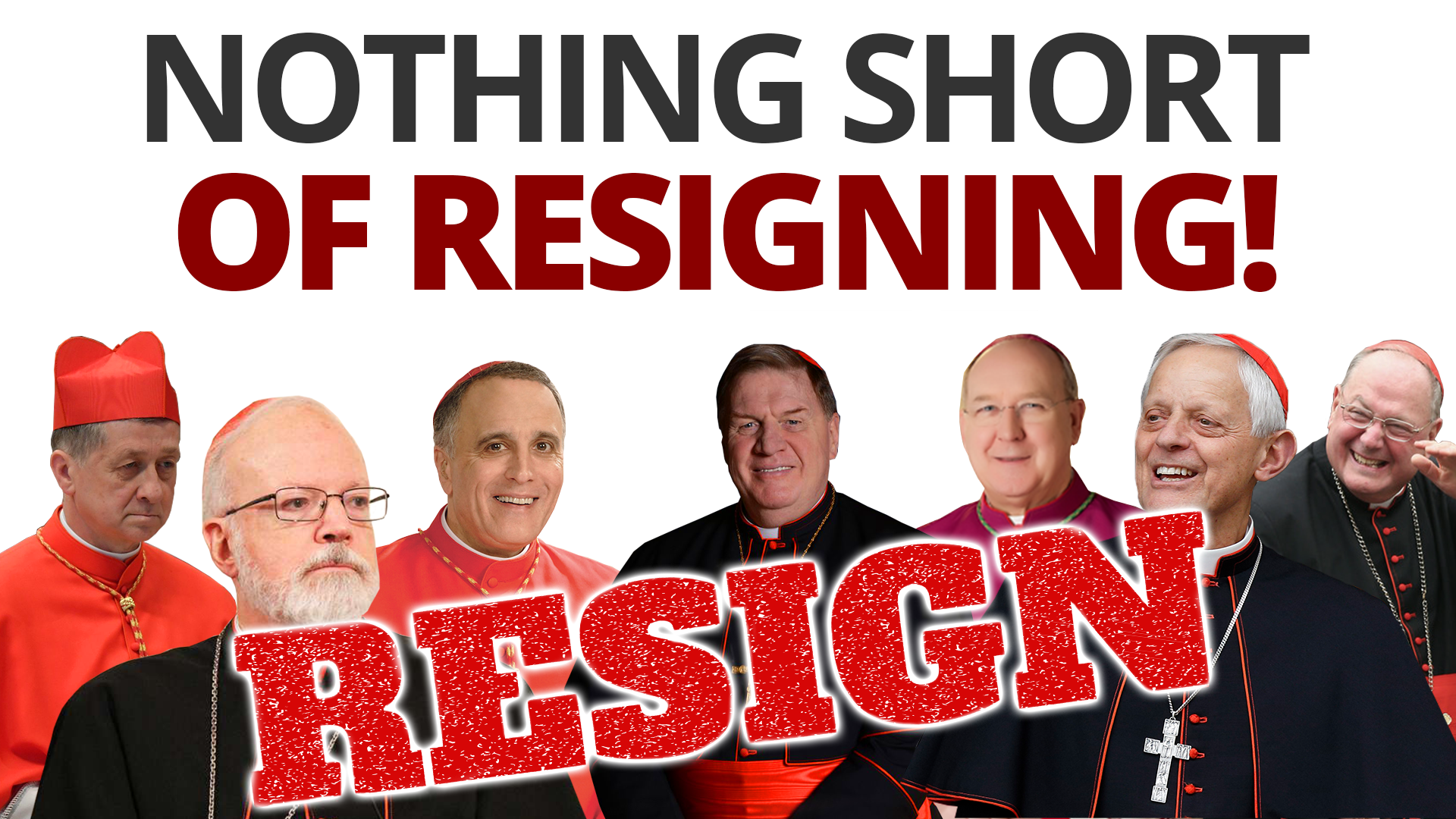 Nothing Short of Resigning!
There are consequences to actions — especially evil actions.