Speaking From His Hiding Place

This week — specifically Thursday — marks the one-year anniversary of the revelations about former Cardinal McCarrick being a serial homopredator.

Last June 20, the New York archdiocese had to go public with the information after it was determined that accusations against him — groping a teenage altar boy in St. Patrick's — were credible.

A lot, and we mean a lot, has happened since then, and so, all this week, Church Militant is going to step back and take the wide view, the 60,000-foot view, as they say.

In the midst of multiple state and federal investigations, police raids of chanceries, ongoing cover-ups by multiple bishops, the releasing of lists of predator clergy that are incomplete and so forth, what has changed in the Church?

We have invited a number of very well-informed Catholics to come on the air this week and talk with us, share their observations of where we stand right now as a Church.

Today, Fr. Paul Kalchik, forced into hiding by his cardinal-archbishop, Blase Cupich, who dispatched a couple of chancery thugs to his parish to try and force him to go to the notorious St. Luke's Institute in Maryland — that because he burnt a gay banner that a former active homosexual priest at the parish who was found dead in the rectory amidst an ocean of gay pornography, hooked up to sex machine, had sacrilegiously hung in the sacristy, covering up the crucifix.

We reached out to Father at one of his hiding places and asked him, one year later: How does he see things? 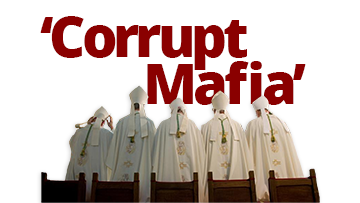