It needs to have the whistle blown.

Millions of Catholics are waking up to the carnage in the Church, looking around and saying, "What happened? How did it all get to this point?" Valid questions — and they deserve valid answers.

The Church has had spiritual and temporal enemies from the very instant She emerged from the womb of Israel. Her divine founder was betrayed and murdered, Her original disciples virtually all martyred and first generations persecuted for centuries.

All of the temporal hate, of course, was whipped up in the unseen world of the spiritual by Her major nemesis, the serpent. So we first accept that any evil which befalls the bride of Christ is first engineered by the demon.

At that point, he uses many various ways and launches multiples attacks, sometimes simultaneously, others times consecutively, but always attacking. Sometimes the attacks are obvious and all-out frontal assaults, but other times, it comes from spiritual espionage — a fifth column, infiltrators — whose mission is to "flip" those already inside.

So they penetrate and poison, slowly at first, releasing their infection, looking for victims they can latch onto and exploit a weakness, any weakness — spiritual, psychological, physical, whatever.

The key that unlocks this specific plan is understanding that the point of attack shortly after communism walked onto the world stage was Catholic seminaries. It was here in the seminaries where the first real infiltrators got into the Church, dropping, so to speak, behind enemy lines to begin a decades-long, slow process of corruption.

In truth, not only did Communists do this in proven cases in eastern European seminaries, but also in U.S. government departments all over the federal bureaucracy.

In the United States, as testified to on camera with Church Militant by Alice von Hildebrand, over a thousand Communist agents over more than a decade infiltrated U.S. seminaries, many of them sexual deviants — homosexuals, pederasts and so forth.

The eventual goal was to have at least some of these men rise to levels of influence where they could enlist other men in the successive generation to carry on their work of dismantling the Church.

Seminaries of both dioceses and religious orders were targeted and penetrated. The Communist invasion behind the lines proved to be enormously successful, and as the first generation passed the baton to the second, the strategy changed.

It was no longer to recruit actual Communists or Communist sympathizers for the seminaries. With many original agents having planted deep roots of subversion in the Church, all that was necessary moving forward was to enlist malleable, weak men and malform them in the Faith.

This is why gaining control of the seminary system was so vital. It ensured one poor crop of priests after another, some of whom would go on and become bishops, who with their poor formation would keep the cycle going without any further specific need for actual Communists.

So one by one, seminaries around the United States as well as other places in the world became houses of de-formation, churning out tens of thousands of men who were malformed in the Faith while also screening out those who possessed true vocations; increasing the bad and eliminating the good.

Part of the malformation involved dumping the writings of St. Thomas Aquinas and promoting the works of known dissidents. Cardinal Walter Brandmüller, in a recent interview with Catholic reporter Ed Pentin, spoke of the beginning of open dissent in the seminaries in the late 1960s and moving forward:

I don't know why, but that was the time of [dissenting] lecturers: [Jesuit Father Josef] Fuchs, [Father Bernard] Häring, and [Father Charles] Curran. They were offering their teaching, the boys listened to these lectures, and then began practicing [homosexuality]. The North American College at that time was a center of homosexuality.

For His Eminence to openly peg the North American College — also known as the NAC — for homosexual behavior and dissent stretching as far back as the 1960s is quite the indictment.

The NAC is considered the West Point of U.S. seminaries. Candidates there are often on the fast track to be bishops and so forth.

Mount St. Mary's in Baltimore* was among the pinkest of the numerous pink palaces. Mundelein in Chicago was a hotbed of gay activity among seminarians — not to mention various bishops, in true McCarrick style, cruising the corridors.

The Pontifical College Josephinum in Columbus, Ohio, while under now-Cardinal Blase Cupich from 1989–1996, was known all over the country for its gay subculture — that was, in truth, more the dominant culture — supported by Cupich, according to multiple seminarians present while he was rector.

The list of pink palaces is endless, and not just diocesan seminaries but religious orders' houses of formation as well. Barely any of the major established orders was spared; Franciscan, Dominican, Jesuit — especially the Jesuits — churned out gay men like clockwork, as pro-gay Jesuit Fr. James Martin has gone on the record and admitted.

The situation got so bad that in the 1980s, the Vatican launched an investigation, led by, among others, Pittsburgh Bp. Donald Wuerl. His and the team's conclusion was, in essence, while some edges needed a little smoothing here and there, things were pretty good.

Meanwhile, the destructive process set in motion decades earlier by Communist plants was reaching a climax. The Catholic priesthood had been almost completely transformed, and over the years with it, the episcopate in America, as deformed and homosexual seminarians became deformed and homosexual bishops who appointed homosexual rectors of their seminaries and the cycle continued.

These gay priests — many of them active — were placed in parishes and chanceries and schools throughout the Church to continue the corruption.

An important point is this: Even if an individual priest is not homosexual, active or otherwise, he has still more than likely suffered through the philosophical and theological malformation which is still present in so many seminaries, so he is ill-prepared to go into parish life and be another Christ to the people.

He is taught to be an accommodationist, to leave the happy-clappy liturgies in place, to resist any longing for tradition in liturgy or catechesis. He has been raised as a modernist, by modernists, and that is all he knows.

There are a number of ways at getting at who was or is a "bad actor" in all this. One is to look at which bishops consecrated a new bishop. Oftentimes, the pedigree of a bishop can be easily determined by who consecrated him a bishop. It's not an iron-clad rule, but more often than not, bad bishops beget more bad bishops.

But another means of determining the "Catholicity" of a given bishop is to look at his seminary association — not just where and when did he attend a given place but, more importantly, was he ever on the faculty or was he rector of a pink palace? Were those immediately under him involved in sexual abuse of seminarians or the cover-up of it?

These answers don't provide all the knowledge a person needs, but they do hold the key for detangling the web of the homosexual network because this is how young gay men were identified, recruited, tested and then ordained and promoted. Once promoted, they keep the cycle going.

All one has to do is go back and look at McCarrick's involvement in seminaries as well as who he helped promote into the episcopate, or in the case of men like Cupich and Tobin and Farrell, into the College of Cardinals.

It is a web of deceit and immorality as well as spiritual and financial corruption, but just remember what your parents probably once told you: Tell me who your friends are, and I'll tell you who you are.

This has been almost a century of spiritual espionage going on in the Church. It needs to be completely exposed — meaning names and associations and relationships — all the way back to seminary days.

*Michael Voris misspoke in the video and named the seminary in Emmitsburg when he intended to say Baltimore. 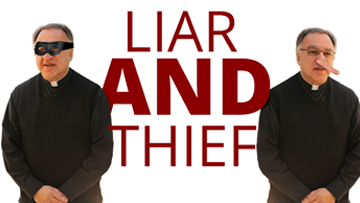 Liar and Thief
And he needs to be dumped.