Vigneron needs to be removed.

We've been telling the world for years now that the archdiocese of Detroit has very evil stuff at play. It has for decades, but under the leadership of Abp. Allen Vigneron, it remains the case. And yes, it all revolves around the homosexual network that Vigneron knows all about and is covering up.

The case we are about to share with you is so heinous and revolting, it's hard to put it into words. So you might want to listen to this yourself before any small children do — precisely because this involves children.

This story is now all over secular news: Archbishop Allen Vigneron is being sued personally for moving a priest with a history of abuse allegations into an archdiocesan parish with a school. According to the suit, Fr. Aloysius Volskis (also known as "Fr. Al"), a native Lithuanian who had a history of moving to and from different countries, arrived in Detroit prior to 2010.

Vigneron, who had done a five-year stint as bishop of Oakland, California, arrived back in his native Detroit as archbishop the year before, in 2009. Father Volskis had been at an ethnic-Lithuanian parish in Southfield, but charges emerged of sexual assault at that parish. Apparently disregarding those complaints, Vigneron moved Volskis to Immaculate Conception Parish in Lapeer, many miles away from Southfield, and, to no one's surprise, it happened again.

This time, the victim was an 8-year-old boy (whose name and identity are being withheld, as he is still a teenager). According to the suit, under the pretense of spiritual formation, Volskis had the boy alone in the faculty lounge, gave him some pills — which caused the boy to lose any defense of himself — and then sodomized him, causing damage and bleeding.

Volskis had the boy alone in the faculty lounge, gave him some pills — which caused the boy to lose any defense of himself — and then sodomized him.

When the drugs wore off, the boy saw his clothes undone with his pants at his ankles. Once to, the child-rapist priest — put in the school by Vigneron — told the boy that if he told anyone, his family would become sick with disease and he would go to Hell. For years, the boy kept his terrible secret, afraid to confess what had happened because of the priest's threats. "Father Al," according to the suit, kept sexually victimizing other individuals, and little by little, it all started coming out.

When the family of one victim went to the local police, the pastor lied and told the parish the priest had gone back to Russia for a family emergency. However, witnesses at the parish saw Fr. Al in the parish (where he was being hidden away) for three more months — apparently until the archdiocese, under Vigneron, could spirit him out of the country, which is eventually what happened.

Since the filing of the lawsuit, Church Militant has communicated with people close to this case, and we have independently confirmed that the archdiocese of Detroit was, in fact, hiding him in the rectory looking for a chance to get him out of the country and avoid a messy public prosecution.

As of this recording, Church Militant has discovered who we believe to be the priest at a parish in Lithuania, where posted videos of his homilies are replete. Since we have not yet been able to verify that this is him, we are concealing his face. But, as of now, all indications are that this is the same priest.

The young boy's life, according to the suit, is (understandably) a wreck. Shortly after news began publicly circulating among parishioners about Volskis, the boy confessed to his mother that the priest had raped him. She remembered the day because she had found blood in his underwear, but passed over it at the time as "digestive issues."

After telling her the truth, his mother was diagnosed with cancer, and the boy is blaming himself, remembering that Fr. Al had told him that if he told anyone, his family would develop illnesses and he would go to Hell — in essence, spiritualizing his sodomy of the 8-year-old. Today, almost 10 years later, the boy is traumatized, and the archdiocese of Detroit is heading into full spin control as yet another lawsuit is dropped on the archbishop.

However, this case is extremely problematic for Vigneron because he is directly implicated. The archdiocese is trying to put distance between the priest and the archbishop, quietly plotting a strategy with their attorneys that "Vigneron is not responsible because the priest is not officially from the archdiocese; he was just on loan."

That's not going to fly. The archbishop approved him being here and had him moved after the first accusations arose. Whether he's from Detroit or not makes no difference. So the jam Vigneron is in right now is this: Why is he still, at this moment, the sitting archbishop of Detroit?

He has been directly implicated in a sex abuse–cover-up case.

That charge automatically triggers Pope Francis's special orders — known as "Vos Estis" — which require Vigneron to step down and have this case investigated by people not under his authority. That happened in Crookston, Minnesota when the bishop there, Michael Hoeppner, was caught essentially lying in a videotaped deposition in another sex abuse–cover-up case.

After the McCarrick scandal broke in 2018, the pope put these special directives in place to handle cover-up bishops. Vigneron is now credibly accused of covering up a case of sex abuse, of ignoring complaints, just as he is accused of in the Orchard Lake Seminary lawsuit  Church Militant told you about earlier this week.

If he does not either step down or get removed, this will be an indication that Rome is not really serious about getting rid of the filth in the Church. But the case at Orchard Lake and this case of the 8-year-old boy are not the only cases where Vigneron is accused of covering up sexually abusive clergy.

If Vigneron does not either step down or get removed, this will be an indication that Rome is not really serious about getting rid of the filth in the Church.

That's not once, not twice, but three times he has been tied directly to covering up for or moving around sexually abusive priests — when he himself has received the information firsthand. If Vigneron is not removed immediately and a full-scale public and transparent investigation begun instantly, then this is all the proof you need that the Church is run by a homopredator network.

And yes, it is just that simple.

And for the record, Church Militant is forwarding a copy of this Vortex script directly to the papal nuncio in Washington, D.C. to get that process moving. We would invite you to also write to the papal nuncio and request the same. The address is easily found on the internet.

Vigneron needs to be investigated immediately. Likewise, a couple of years back, in anticipation of forthcoming lawsuits, Vigneron oversaw the shifting of hundreds of millions of dollars worth of archdiocesan assets into a legal-but-highly-questionable outfit called Mooney Real Estate Holdings to try and shield it from any damage awards.

Church Militant was the first to break that story as well, which was also picked up by secular media. The man who set all that up at Vigneron's direction was attorney Christopher Dine from the archdiocese's legal firm, Bodman. Dine handles the covering up of available cash for the archbishop, and attorney Tom Van Dusen handles covering up the sex abuse cases.

So the victims get victimized again, and Vigneron gets to say, "I'm sorry, the archdiocese has no money," which, technically is true but, in reality, is a lie. It's just that the money is in a different account. But here's the catch, Cover-Up Vigneron controls both accounts. Vigneron is second in command at the U.S. bishops' national conference, in line to be elected president next year.

If there were ever to be a black eye on the Church in America, it would be the bishops electing a credibly accused cover-up bishop into the top position.

Meanwhile, back in Detroit, a lonely teenager is left abandoned by a Church he trusted in his childhood, while high-priced attorneys, paid with money from the faithful, and staff, lying through their teeth, circle the wagons to protect a crooked archbishop. And all of them carry on like it's "business as usual."

Just how many passes does Vigneron get? How many priests, faithful and children does he get to destroy, all in the service of protecting his corrupt homo-network?

So Rome, just how serious are you about cleaning up the Church? 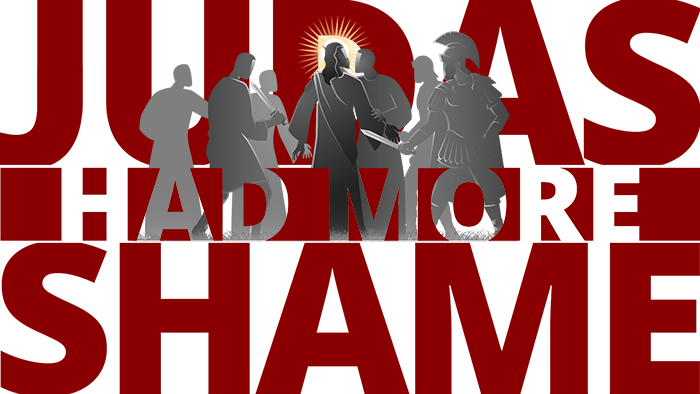 Judas Had More Shame
These men have no shame or faith.