It's what criminals do.

Until faithful Catholics can clear a huge psychological hurdle in their minds, nothing in the Church is going to change. The hurdle is that the hierarchy is an international gay-crime syndicate of liars, thieves, homosexuals, sex-abuse cover-ups and theologically unsound destroyers of souls. And that's on one of their better days.

Donald Wuerl, for example, gets $2 million a year in retirement from Wilton Gregory. Timothy Dolan accepted a palatial house in upstate New York that was given as a gift from a wealthy New Yorker for retired priests and claimed it for himself. The diocese of Newark under Joseph Tobin just sold a mansion for almost a million dollars that the deceased former archbishop John Myers had built for himself. Blase Cupich is closing down almost a hundred parishes in Chicago, and his hit list includes those with millions of dollars in endowments.

Here in Detroit, where the destruction of the Faith in America began under Cdl. John Dearden back in the late 1960s, Allen Vigneron is violating canon law by instituting a program called "Families of Parishes." Families of Parishes is the brainchild of Fr. John Riccardo of Church of Nice fame, which essentially lumps individual pastors and their parishes into one larger parish and then places a so-called administrator over them, undercutting the pastor's authority.

And yes, a group of pastors here in Detroit has already compiled their canon law case for Rome. Vigneron, you will recall, is not only party to different lawsuits involving sex-abuse cases, but he is also the same archbishop who coddled a practicing homosexual as his director of music liturgy for years — a man living with his homosexual partner for 15 years, which Vigneron knew all about.

Here's the underlying problem that connects all these things and many more: Many of these bishops see themselves as little monarchs. They see themselves as having absolute power to do whatever they want and to whomever they want. It's the perfect line of work because it offers unquestioned, unaccountable access to large sums of money and opulence.

For example, Wilton Gregory, who is now the cardinal archbishop of Washington, D.C., started to build himself a pad worth $2 million when he was archbishop of Atlanta until he got busted by local media. Once caught, he called a halt to the project and said that he didn't realize that it looked like a bad thing. This is from the same fellow who's happy to hand fellow homosexualist Cdl. Wuerl $2 million a year.

Wuerl is the one who proposed the insane notion at a funeral Mass for a certain priest that he had been a good servant and was certainly "in Heaven." The priest had been murdered by a gay prostitute in Havana after having set up a gay prostitution ring between Miami and Havana and after blackmailing Wuerl for a huge sum of money by threatening to go public with Wuerl's gay-clergy network in Pittsburgh.

As the pope tries to recover from surgery and a possible post-op infection, the man second in command — Camerlengo Kevin Farrell, former bishop of Texas and roommate for six years of Theodore McCarrick, got proved a liar in the McCarrick report issued by the Vatican a couple of months back.

When the news broke three years ago with revelations that McCarrick was a serial homopredator, Farrell said, "I was shocked." That was in 2018. But in the report, he admits he knew back in 2007 and 2008 that secret payments had been made to keep McCarrick's victims silent. So much for being shocked. And just for clarity, this is the man second in command in the Church; the man who runs the Church when the pope can't.

We could go on and on, but you get the idea that the hierarchy is an international gay-crime syndicate. These are not isolated incidents, but rather the rule. This is the current infrastructure. It's not just some window dressing, but the actual architecture of how the Church operates right now.

This woeful lot has made the sacraments, the Real Presence and the glories of the Faith merely window dressing. It's why they won't defend the Blessed Sacrament from sacrilege. It's why they either promote or have no comment on James Martin and his "Brokeback Mountain-theology" tour all over the country. It's why there is an active lawsuit filed by a seminarian against the ongoing homosexual harassment at the North American College in Rome, a breeding and training ground for U.S. bishops.

The international gay-crime syndicate strikes back when their activities are revealed from the inside. It's how they operate. And they have allies who protect them and keep the syndicate chugging along, such as Curtis Martin of FOCUS, who will never allow a single word of criticism against bishops from those with any ties to his organization (which, by the way, he makes quite the comfortable living off).

For example, as a fundraiser event for his group, he sent out special invitations to a select group of wealthy Catholics to join him at a luxury resort and mingle with Jay Leno and former president George W. Bush — both non-Catholics, by the way. The invitation was endorsed by Cdl. Timothy Dolan, who really likes mingling with rich people (remember the Met Gala a couple of years ago).

While Dolan and Curtis Martin and others are filling their coffers and helping the syndicate to keep chugging along, Dolan was lying to the New York media left, right and center about his embezzling, homosexual, gay-for-pay priest who was protected by his homosexual chancery. (And on that topic, Church Militant will be releasing a devastating exposé next week on that very issue entitled Cardinal Dolan Exposed: The Fr. Peter Miqueli Case.)

The syndicate has many tentacles that extend into every aspect of the Church's life. Just like the mob, some of the things they do are legitimate because they have to keep up appearances. So they build useless evangelization programs which may do some minor good here or there, but overall have done more harm than good because they present an immature picture of the Faith, with its watered-down catechesis.

They've been doing this for decades as a kind of smokescreen, but it has proven useless. The number of Catholics who reject the Faith grows larger every year because their souls are not the primary concern of the international gay mafia. Many of those who have walked away or killed themselves are the abuse victims of this crowd or the repeat victims who, once reporting the abuse, were victimized again by being smeared, lied to and so forth.

This woeful lot has made the sacraments, the Real Presence and the glories of the Faith merely window dressing.

It's why Dolan, figuring out that the state of New York was about to lift the statute of limitations on sex abuse claims, quickly scurried off to the bank to take out a line of credit for $100 million on the property directly behind St. Patrick's Cathedral and then started cajoling victims to come and self-report and take a settlement, with the condition that they never sue the Church.

The victims didn't know he did that and didn't know that within a year or two they could have sued the Church for millions more than the paltry sums Dolan was handing out. That's how a crime syndicate operates. It all came to light when they tried to buy James Grein's silence with a meager payout for his life being destroyed by Theodore McCarrick. James told Dolan what he could do with the offer and filed a multi-million dollar lawsuit instead.

So this, ladies and gentlemen, is the state of the hierarchy as a body in the Church. Get it into your mind so you can recalibrate your activity and response. It is an international gay-crime syndicate that strikes back at those who expose it and is kept in operation by lay leaders who profit from it.

It's just that simple. 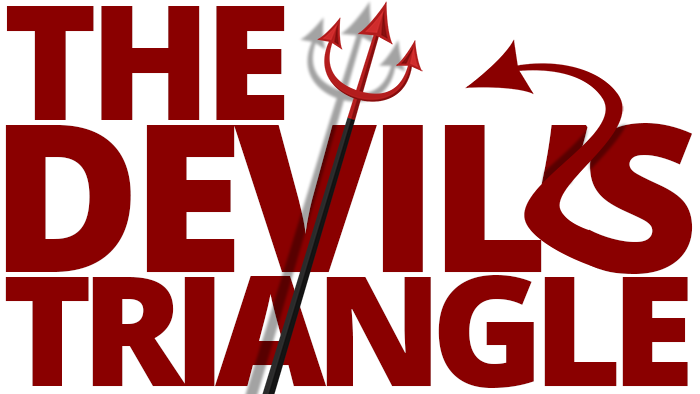 The Devil’s Triangle
Controlled by the demonic mind.