Beginning tomorrow, Church Militant begins its on-the-ground coverage of the sex summit being held at the Vatican, but already things are shaping up to prove what many faithful Catholics already know or have long suspected.

These cardinals and archbishops are liars and are deflecting from the real story. They are all part of the homosexual current identified by Archbishop Viganò in his multiple testimonies since last August.

For example, when a CNN reporter asked a somewhat probing — but not probing enough — question about the cover-up being unable to be proven because the clerics investigating are the same ones who are themselves guilty, it made for an interesting exchange with "Rabbit Hole" Cupich.

For a man like Cupich to say that predatory homosexuality and its cover-up within the hierarchy is only a hypothesis, that proves him to be a liar. But not just any old liar, but the liar-in-chief, the top dog of the whole sex summit — got to hand it to these guys; they certainly know how to stack the deck.

Cupich owes his rise up the clerical ladder to, first, Cardinal Maradiaga — who himself is a cover-up artist of his own auxiliary bishop, outed by dozens of seminarians for him sexually assaulting them — and, second, Theodore McCarrick, who put the "H" in homosexual predator.

So with Cupich having that kind of ecclesiastical genealogy, of course he's going to say it's just all an unproven hypothesis. The reason it's technically unproven is precisely because the only men on the planet who could prove it are all part of the cover-up.

When Archbishop Viganò issued his first statement back in August, he identified the players, and Cupich was one of them. So there, Your Eminence, why not investigate that? Cupich has made a career out of covering up for the homosexual current and keeping it going.

Numerous seminarians at the Pontifical College Josephinum in Columbus, Ohio are saying how Cupich, as rector there, promoted a highly charged gay culture. A number of them actually challenged Cupich over it.

Cupich is a major backer of James Martin, the pro-gay cleric spreading subtle heresy all over the Church.

Cupich has given his approval to Holy Communion being given to active homosexual couples, thus adding sacrilege to their crimes.

Cupich had two of his priests caught by police in the sex act in a car on a public street in Miami in broad daylight right across from a school.

Cupich had to shut down a Chicago training house for South American seminarians because word was getting out that it was little else than a gay bar.

Here's the challenge: Cupich is lying through his teeth. He knows it. Other people know it.

But even in the face of incontrovertible publicly known facts, he can just keep on lying because there is no accountability for these men. They answer to no one except, officially, the Pope, but since they are the Pope's inner circle, nothing can be done.

This is why so much attention in the coming weeks and months will begin to focus on the federal and state investigations which many of them are under.

The next pope — hopefully one who understands what’s going on — should defrock all these men instantly without a second thought.

And on a related note, as a follow-up to a Vortex last week also touching on Cupich, it seems the bishop of Rapid City, South Dakota, Robert Gruss, is all in a twist over the response to his effort to defend Cupich by calling lay Catholics "evil" and doing the "work of the Evil One" for trying to expose the background on Cupich.

He sent an email to his priests earlier this week, saying he would be having them read a second letter out loud at all the Masses.

Here is what the email said:

This new letter is a response to reaction from this group (Roman Catholic Faithful) as well as Church Militant. I and my staff have received a vast number of emails, Messenger posts, Facebook posts, etc. beginning the day following the reading of the letter. These emails and posts were from supporters of these groups and contained some of the most disgusting vitriol that I have ever received in my life. They were filled [sic] hate, lies, disgusting comments and character assassinations specifically against me.

He goes on to excoriate whatever priests informed Church Militant and Roman Catholic Faithful of the letter he had read out at Mass, calling them Judases and comparing himself to Our Blessed Lord being betrayed. Gruss openly defends a man like Cupich, who used to be the ordinary in Rapid City.

Cupich has multiple times proven himself a thin-skinned liar, in open record. Remember when he gave the interview, on camera, to a local Chicago affiliate where he said — again, on camera — that the sex abuse scandal was not going to deter the Pope from much larger concerns like talking about the environment.

He first accused the station of lying, saying they took him out of context. They did not.

Cupich then wrote a letter that he ordered all his priests to read out loud at Masses the following Sunday defending him and repeating that the TV station had been duplicitous.

Not taking too kindly to being accused of lying, the station then posted the entire interview, uncut, on their website for all the world to see, totally proving that Cupich was lying about being quoted out of context.

Caught in public, and only after he had been caught red-handed, he then did a little backtrack, blaming things on miscommunication — blah, blah.

Recall as well that it is Cupich who, along with fellow traveler Donald Wuerl, took the cover-up plan to new heights by scheming in Rome before the U.S. bishops' meeting this past November to block any kind of discussion or vote on reform ideas involving lay oversight.

In other words: Keep it so the bishops investigate themselves. The man is detestable.

So when Rapid City's Bishop Gruss comes rushing like a ladder climber to the defense of Cupich — a proven liar, time and time again — and then accuses laity who want answers of being "evil" and then insinuates some of his priests equally concerned about the filth in the Church are Judases and he is the victim — it all rings more than hollow.

A couple of points about his letter: First, we highly doubt that the implication that hundreds of laity cursed him out in vile language is true. If some did, they are wrong. But the implication is his office was flooded with those type responses — again, hard to believe.

Secondly, it was not a priest who gave us the letter that was read out loud. So his tirade about his own priests — well, way to "build a bridge" there, Your Excellency.

And lastly, under the category of further proof about the level of tone deafness of the hierarchy, instead of sitting down and writing another letter attacking the faithful, presumably expected to be more damning than the first and forcing his priests to read it out loud again, perhaps Bishop Gruss should put his pen down and ponder the question of why he got so many responses from justifiably angry Catholics.

Maybe instead of accusing them of being evil and labeling his own clergy as Judas, he might want to really think, "Hmm, why are so many people angry at my approach? Could it be they see me, the bishop, as part of the whole corrupt network for defending a cardinal who lies for a living? Maybe they are mad that I am defending a cardinal who gives a big thumbs up to sodomy and sacrilegious Holy Communion, who defends heretic spewing priests, who refuses to admit that the problem in the clergy is active homosexuality among priests and bishops."

"Hmm, maybe that's why they are upset," he should ask himself.

And while we are busy examining the flurry of letters pouring from Gruss' pen, perhaps it might be instructive to see what letters have not been written by him.

Can't seem to find any letters from him being read out loud at Masses on damnation, or the rampant practice of birth control among Catholics or unmarried Catholics living together or the disorder of homosexuality or a host of other things.

When these big, big headlines are being generated over in Rome over these evils — remember, the network is vast, and we do mean vast — and it reaches down into all areas and places in the Church.

It is able to be sustained and even thrive because lower-level lackeys defend the liars and cover up for them and attempt to lend them an air of respectability. For both Cupich, Gruss and many in between, sorry gentlemen, but that train has already left the station.

Attack the evil in your own ranks. Stop attacking faithful laity, stop playing the victim. Do your job, which is to slave away for the salvation of souls. Do that or step down — or wait for the police to come and cuff you. 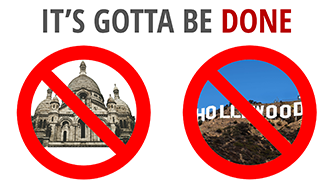 It’s Gotta Be Done
Let it all hang out.