It's gotta be done.

The U.S. bishops meet next week in Baltimore, and we think the topic of this Vortex just might become a topic of private conversation between them. It should be, because faithful Catholics are mad as hell about your lies and deceptions and we are coming after you.

These Judas bishops need to be completely exposed and turned over to law enforcement.

Church Militant is happy to announce — excited to announce — the launch of what we are calling the Church Militant Action Arm, a broad-based effort to get the goods on these rotten men through secret investigations where we turn over what we unearth to law enforcement and help police and prosecutors get these Judases out of office.

The goal is to provide absolute anonymity for whistleblowers in dioceses all over the country who are sick to death of participating in all this evil.

There are loads of good people in chanceries who feel financially trapped, unable to challenge their local bishop and his staff for fear of being fired and harming their families — same for the staffs on the parish level.

Some of these things they know involve horrible sexual immorality, priests with their sodomite boyfriends living with them, pornography on the parish computer, gay parties in the rectories and so forth.

But there is almost always accompanying financial malfeasance as well. Sexual perversion goes hand in hand with theft.

This is exactly the situation in the matter of Bp. Michael Bransfield of West Virginia, who is a homopredator of seminarians and a thief. As my mother always used to say about this rot, "There's never just 'one' cockroach."

As The Washington Post revealed at great length on Thursday, Bransfield was ripping off enormous sums of money from the diocese to fuel his luxurious lifestyle, which included flying around in private jets, paid for by the poorest diocese in the country, and he was, at the same time, also sexually attacking seminarians.

And yeah, we've heard all this before. In fact, it's all we ever hear because this kind of filth is the norm. It is not the exception. And that's what regular Catholics need to understand.

The whole bloody thing is rotten to the core, completely fetid, rotten, stinking corpse of corruption and sexual perversion, and then the cover-up of it all — done in the name of the Church, of course.

Church Militant has been telling everyone this for years, and back before McCarrick, everyone called us nut jobs. You don't hear that as much anymore, do you?

Now they just issue press releases saying Church Militant is divisive and should be avoided. You filthy, whitened sepulchers.

Think about the case of Fr. Peter Miqueli in New York. On the sexual immorality front, he spent tens if not hundreds of thousands on gay-for-pay prostitute Keith Crist.

But on the financial front, he got the money to fuel his lifestyle by ripping off the parishes he was assigned to.

Then moving further up the food chain to cover-up Cdl. Timothy Dolan, Dolan and his homosexual-stuffed chancery knew all about him and did nothing.

And here's the point of all this: None of this gets exposed unless someone comes forward and preferably with some documents.

Think about Siobhan O'Connor in Buffalo, who exposed the filthy lying cover-up by Bp. Richard Malone there, a man we confronted in the Detroit airport asking questions about his lies and cover-up, something he didn't like too much. Too bad.

Again, in the case of the sodomite rapist bishop of Springfield, Illinois, Daniel Ryan, exposed by Roman Catholic Faithful Stephen Brady. It was sources within the diocese who knew the truth, privately divulging the evil to Brady, that finally brought him down.

These stories are multiplied by at least the hundreds across the entire Church in the United States, and they all need to be brought to light and these men exposed and hopefully arrested and put on trial.

Those miters and robes need to be replaced by orange jumpsuits and prison stripes. So here's how this whole Church Militant Action Arm is going to work.

We have multiple contacts in various levels of law enforcement — from the feds to the states and even local agencies. Many of these men and women are excellent Catholics who want the goods delivered to them so they can do their jobs.

They are more than excited about working with Church Militant to get things handed over to pursue legally.

For example, our recent reports about Fr. DeLand, the homopredator Saginaw priest — that man is behind bars where he belongs because of the excellent investigative work of Detective Brian Berg, who got fired by his boss for going after DeLand.

Now, much of what we know from thousands of tips needs further digging and investigating. That means private investigators, and that means money.

In planning for this Action Arm, we have lined up some private investigators who are all set to go and are just waiting for us to point them in the right direction. Almost all of them are former law enforcement, so they know what it is they are looking for, and they know how to get at the information. There are ways, and they know how.

Now, the third piece of this is the whistleblowers — clergy, chancery staff, parish staff, seminary staff, you name it. You guys know what's going on. You know about the strange goings on with money and expenses.

You are the ones whose noses first sniff out the stink, and we are providing you with an absolutely guaranteed private channel to report what you know, to share documents with us, to hand over information and even evidence we can run by our team of private investigators so they can develop it sufficiently to hand over to law enforcement.

The goal, of course, is that what is handed over and shared with state attorneys general and police and the feds will result in arrests and prosecution, followed by prison time.

And yes, we have reached this point. The preposterous plan orchestrated by cover-up Cdl. Donald Wuerl and sodomy-supporting Blase Cupich, wherein the bishop will investigate themselves — that notion is outlandish and simply cannot stand.

These types of men need to be hounded from office, and if bad PR will not work — which it really hasn't (just look at Malone as one example) — then handcuffs will.

So Church Militant is once again appealing to you for your help. Bottom line: Someone has got to do something.

We all have a duty to act, hence the all-new Church Militant Action Arm, which we are appealing to you to help fund and to keep funding. Stop giving money to the bishops, and start giving it to us to investigate them and turn the findings over for prosecution. It's that simple.

If they're all so big on self-policing and self-investigating, how did Bp. Bransfield sexually harass seminarians and rip off the diocese for huge sums for so long?

And one final word, this one specifically to bishops, good bishops — bishops themselves who are deeply troubled about all this, but to this point have been cowards or fallen back on a childish notion of episcopal fraternity that evil men in your ranks have used to hide their nefarious and wicked actions.

This is a direct appeal to you. Some of you have my personal contact info — email, phone and so forth.

We are asking you directly to think about the state of the Church, the condition of so many souls who are perishing on your watch. If you won't do something publicly or come out publicly about this evil, then do so privately with us.

You know many, many secrets — bad secrets — and you have all the paperwork. Get in contact with us and turn it over.

So this is a personal invitation for you all to privately contact us and help in this effort. We will say nothing, publicly or privately, about any information given to us whomever to anyone.

You know, all of you know, that Church Militant has been right about all this all along. So you know you can trust us.

Souls are at stake, and until this filth is ripped out of the Church, there is little prospect of salvation for so many of them because the entire mission is compromised.

Please help us, bishops and laity.

Just click on the link for all the details. 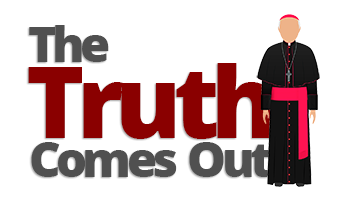 The Truth Comes Out
It ALWAYS does.