Lots and lots of work to do.

As you more than likely know, the lying, cheating former bishop of Buffalo, Richard Malone, is now off the scene.

Malone, you might recall, is who Church Militant tried questioning in the Detroit airport a year ago, just as his corruption and cover-up were coming into the full light of day and the media spotlight. What we were specifically querying him about, and that he lied to us about, was the case of Anthony Ravarini, whom Church Militant had interviewed a few months before.

Anthony was forced to perform oral sex on a Buffalo priest when he was six years old. There were two witnesses to the event.

But when we asked about justice for Anthony — specifically why Malone had left the offending priest, Fr. Denis Riter, not only in active ministry, but actually a pastor at a Buffalo diocesan parish — Malone lied to us and said the case had been fully examined by his sex abuse review board. Then, the lying, cheating bishop turned around and accused us of lying — because that's what liars do.

He lied when he said his review board had thoroughly investigated the case. No, they did not, and still haven't. Anthony was never questioned. Neither of the witnesses was ever questioned. That obviously leaves open the question of just who was questioned.

The abusive priest was (and he denied it), even claiming that the young Anthony had caused the genetic material to be on his face, hair and clothing by his own effort. That ludicrous claim was apparently enough for Malone and his "review board."

Cases like that are why Bp. Malone is now former Bp. Malone.

But note: The arrogance this man displayed and still continues to display is breathtaking. He had the gall to issue a statement the day the Pope fired him, saying he was planning on sticking around the diocese to help with the healing — his word — and said that his leaving was his choice. Liar! Just incredible!

But don't think Malone is alone in his arrogance among the bishops. He just got caught — something they had better get used to in the coming months. Hundreds of lawsuits have flooded the courts, and the truth of this decades-long evil of sex abuse (most of it homosexual, power, ambition, financial malfeasance and so forth) is going to all be revealed.

In the case of Buffalo, the Pope appointed nearby Albany Bp. Edward Scharfenberger to step in and administer the diocese until a new bishop is appointed. He said, rather straightforward, that we have to look these affairs straight in the face, as they are. But perhaps most importantly, he made this comment to the assembled media: "We are here; thank you for your work."

That is a very important point. Without the intense media coverage — non-stop pounding on this rotten, cover-up bishop — he would still be running the show. That coverage first came when his former secretary, Siobhhan O'Connor, went to the local media with documents proving his lies and corruption. She and her story were even on 60 Minutes.

Meanwhile, Church Militant had already been working on the other angle of victims like Anthony being denied justice, as Malone just lied to and ignored them.

A week back, secular media did a story on how untrustworthy these diocesan review boards actually are. Their goal is to protect and insulate the institution from financial or legal damages, not to get at the truth. That scenario is playing out here in the archdiocese of Detroit, where the corrupt Abp. Allen Vigneron keeps losing court hearing after court hearing in his attempt to railroad innocent priest Fr. Eduard Perrone.

Likewise, over in the diocese of Crookston, Minnesota, Bp. Michael Hoeppner — who ordered his priests and cautioned his laity to stay away from a Church Militant talk sponsored by a local group — was caught on videotape deposition lying and evading and twisting himself in knots trying to prevent the truth from coming out.

The truth was his track record in dealing with abuse allegations and threatening victims with reprisals if they went public. Hoeppner eventually settled — because they had to — for millions of dollars to multiple victims. But his case was so bad, it became the very first instance in the world of a bishop running afoul of the Pope's new guidelines for dealing with cover-up bishops.

The archbishop of St. Paul-Minneapolis, Bernard Hebda, was charged by the Vatican to investigate Hoeppner and send his report back to Rome. And for the record, it was once again intense media scrutiny that brought all this out.

It was once again intense media scrutiny that brought all this out.

When Church Militant spoke with Hebda's communication guy and asked what the status of the report was, he responded, "After having submitted the preliminary investigation to the Vatican, we have not been instructed to do anything further at this point."

Hoeppner deserves the Malone treatment, and he's not the only one. These rotten men live in darkness and operate in darkness, terrified of being dragged into the light. Until the spotlight swings around to them, too many of them are arrogant, power-hungry dictators who feel their office gives them permission to skip over the Ten Commandments and the Gospel.

Being dragged into the light is precisely how you take down a bad bishop. Church Militant intends to keep up the dragging. 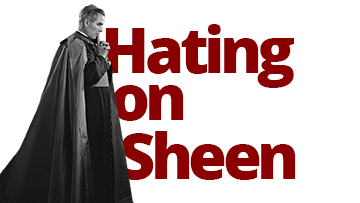 Hating on Sheen
The Church of Nice lashes out.