Tears for a traitor.

Canadian Catholics are weeping these days, thanks to a string of continued disappointments and threats to the Faith engineered by Toronto Cdl. Thomas Collins.

Collins, who has been cardinal-archbishop of Toronto since 2007, has given his blessing — meaning his permission — for the Toronto Catholic School Board to include so-called gender ideology to its charter for schools.

The board voted in favor by an 8–4 vote at its meeting last month to make the move and revealed in notes handed out at the hearing that it had the blessing of Cdl. Collins.

Jack Fonseca, president of Canada's Campaign Life Coalition, reacted to the news with a direct message to Cardinal Collins online.

While faithful Catholics were mourning the decision and Collins' betrayal, the secular media was cheering on the move, saying it was an answer to their prayers, suggesting strongly that little by little, the Catholic Church is changing its approach and teachings.

That's the message of confusion being perpetrated on Canadian Catholics by Collins' betrayal.

Reports are in fact that it was Collins approval that was the tipping factor in the board's decision - providing the final push that a majority of Catholic school trustees needed to add "gender identity" and "gender expression" as protected classes for non-discrimination in all Toronto Catholic schools.

Catholic schools will now allow male teachers to show up to class dressed as women. Boys will be allowed to come to school in a dress. Students, teachers or other staff who object to any of this will be found in violation of the board's code of conduct and may face serious disciplinary measures, including expulsion and firing.

Just as significantly, Catholic teachers will no longer be permitted to tell students the religious and scientific truth that there are only two sexes, male and female, and that being male or female is not a social construct.

But this was only the latest in a string of betrayals by Collins.

As Church Militant reported almost 10 years ago, the cardinal fell absoutley silent when the school baord was debating implementing a gay "Equity & Inclusive Education Strategy" (EIES) that was recommended for all schools by the Ontario government's Ministry of Education.

In 2015 Canadian lawmaker Jim Wilson, who was freinds with Collins, told university students that Collins personally told him to "back off" opposing the sex ed. Wilson had been leading the charge in what was at the time a pretty vigorous fight against the gay curriculum being pushed by Premiere Kathleen Wynne, a lesbian.

According to Wilson, Cdl. Collins phoned him up and invited him to breakfast. They met and the cardinal asked him to get his entire party to drop their opposition.

But the list of betrayals against the Faith continues.

Collins has allowed a sacrilegious gay Mass to carry on at Our Lady of Lourdes ever since he arrived to take over the diocese, after a stint in Edmonton, Alberta. Local newspapers reporting on the gay Masses have cited gay parishioners alleging that the Masses happen with the cardinal's personal approval.

Then there is the remarkable case of Collins allowing a canadian Catholic politician to present himself as a devout parishioner, and then to boast of his full-throated support for abortion.

At an Oct. 3 pre-election event for Catholic voters hosted by the archdiocese of Toronto, Cdl. Collins opened the debate between five candidates with his reflections on St. Thomas More and the right of people of faith to have a voice at the democratic table.

Liberal MP Francesco Sorbara in a remarkably disingenuous opening statement gushed about how important his Catholic life to him is: "I'm proud to be here as a Knights of Columbus member, as a parishioner of St. Francis of Assisi in Vaughan. ... I'm proud to be here as someone who was raised in the values of Catholicism."

During the debate, various videotaped questions were played asking the candidates about their positions on a series of issues. One video from a woman religious with the Sisters of Life was played: "If elected, how would your party tackle these issues (abortion & euthanasia) and defend the rights of all Canadians from conception to natural death?"

Then Sorbara showed just how Catholic he really is.

Sorbara: "When it comes to women's reproductive rights, I personally support a woman's right to choose."

Sorbara's position was well known: He favors killing children in the womb — and yet, at this event hosted by Collins and his archdiocese, Sorbara was allowed to present himself as a vibrant Catholic, someone to be emulated in their faith. He's even a knight with the Knights of Columbus, after all.

Collin's dereliction of duty, just as a Catholic, much less a cleric and even more as Cardinal, is horrifying.

Leaders like this, not just in America but up and down the Church and across national borders, have betrayed the Faith in a manner not unlike the English bishops betrayed the Church under Henry VIII.

Ironic that Collins would begin that debate with comments and reflections about St. Thomas More, who had his head chopped off by the adulterous, murdering monarch precisely because he defended the same faith that the bishops and cardinals of England had betrayed.

Collins is a traitor to the Faith, not unlike hundreds of fellow bishops in Canada and around the world.

All we need to hear now is that he's started up a $400 million campaign drive. That would put him right on par with his fellow American ecclesiastical traitors to the Church. 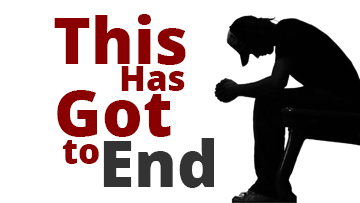 This Has Got to End
And end now!