Only the truth matters.

Within the Catholic world, a media war has erupted. And frankly, it's getting ugly.

There is the establishment media, which does nothing but apologize for inept bishops and their dalliances. They go out of their way (with increasing frequency) to attack outfits like Church Militant for not toeing the party line and kissing up.

In another camp is the Marxist "Katholyc" crowd — that's Catholic with a K. National Catholic Reporter and Fr. James Martin are prime examples, along with America Magazine and so forth. They likewise attack outfits like Church Militant because we report on their dissent and heresy in their attempts to destroy the Church and remake it after their own sinful wills.

We see much of this dynamic at work in the secular media world as well, although there it is a little more clearly defined: Marxist media and more politically conservative media.

Our agenda is the full presentation of the truth of Church teaching at the service of the salvation of souls.

One thing each of those competing camps has in common however is this: Depending on the story and how it impacts their agenda, they won't tell you the full truth. For instance:

Each media camp is simply tied to another agenda other than the truth. When it's convenient to report the truth, they do. Sometimes, in fact, they each even do a commendable job.

But each camp has certain areas and stories they will not cover. In fact, they cover them up because their own agenda is more important than you knowing the truth.

However, here at Church Militant, we have become the antidote to this "agenda reporting."

This week, we began production of our nightly newscast, Church Militant Evening News. It airs Monday through Friday at 6:30 p.m. ET, live, right here on ChurchMilitant.com and then is available for replay until the next day's version goes live.

Why is our journalism so different from what others report to be journalism? Simple. Our agenda is the full presentation of the truth of Church teaching at the service of the salvation of souls, period.

The establishment media's agenda is self-preservation, so they're never going to tick-off the bishops.

The dissident media's agenda is to wreck the Church and transform her into a globalist social justice outfit, so they disguise their heresy.

The rad-trad media's agenda is to convince you that the Church only exists now in breakaway groups because they idolize the Latin Mass and pretend that is the cure-all for the current woes, conveniently forgetting that the Latin Mass was the exclusive Liturgy when the Church fell apart in the mid-1960s.

Here at Church Militant, we don't dodge uncomfortable stories. We explore them, vet them, investigate them and report them. If something can damage the Church's mission, whether in the secular realm or the Church realm, then you need to know about it.

The point of news is to report what's going on so that the truth can be revealed. It's to provide context, history and so forth so you can have an increased understanding and what's wrong and what needs to be done. And let's face it, there's a lot wrong.

That's why we have a crack staff doing yeoman's work trying to get to the bottom of what's going on: when, where, how, involving whom and all those key points.

There is not an outfit like Church Militant in the Catholic world, and we'll even go a step further and say not in the secular media world. We all know that they have an agenda as well — advertising dollars. It may not be as purely ideologically driven as some Catholic outlets because secular outfits have to respond to corporate sponsors who, likewise, have their own ideology.

The Church is in need of purification, of disinfecting, and as the saying goes, 'Nothing disinfects like sunlight.'

It all comes down to trustworthiness, to "whom can you believe?" To answer that question, you need to know a particular outfit's motive — why they do what they do as well as don't do.

Stories an outfit refuses to cover are just as important a consideration as what they do cover. In some ways, it's actually more important what they aren't telling you. Here at Church Militant, we have developed the deserved reputation of telling you like it is, period.

The time has come for Church Militant Evening News, a no-holds-barred, one-stop source for everything you need to know, regardless of who's ticked off by it. Faithful Catholics have a right to know what's going on in every corner of the Church.

The Church is in need of purification, of disinfecting, and as the saying goes, "Nothing disinfects like sunlight."

We've been building up to this point for years now as we think about it. Church Militant didn't start out like this or even think about it. But here we are, shining a light on corruption and cover-up wherever it happens and however it impedes the preaching of the authentic gospel.

The truth is what matters — nothing else. Not little personal agendas, not trying to beef up an email list with clickbait headlines or petitions, not trying to sing a new church into being.

There is much wrong with the Church — not her teachings, but in every other imaginable way — and there are those who exploit all this to advance their selfish causes. But there's a lot of ignorance out there as well, which allows the evils to be exploited.

For years, Church Militant has been the go-to source for millions when learning the whole story, the real story.

And now, our work here each day culminates in the all-new Church Militant Evening News, bringing you the day's news from the only perspective that matters — that of your eternal salvation.

Tune in and tell your friends. 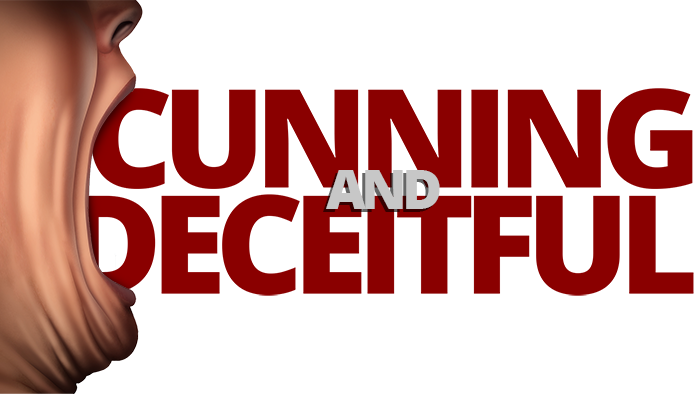 Cunning and Deceitful
Nothing they say can be believed. Nothing.