It's the times in which we live.

We're using today's Vortex as a two-fold lesson. One, to demonstrate just how tedious spiritual warfare can sometimes be. It sometimes takes dogged determination and suffering, to just put your head down and plow through. And two, to encourage you to do so. Remember, Our Blessed Lord says, "Only those who persevere will win the crown."

So bearing that in mind, let's go.

As the city of Baltimore continues to frustrate our attempts to have our Bishops: Enough is Enough rally in Baltimore on November 16, Church Militant scored yet another victory in federal court earlier this week. So, what's the hold up you ask? It's pretty simple, even if it is annoying.

While the judge has agreed, in essence, on multiple occasions (even again this past Wednesday) that our First Amendment rights have been trampled all over by the city, the practical issue is the folks who operate the venue won't sign the contract. That company is SMG, and they operate the city-owned MECU Pavilion for the city.

In short, the city is their client and they don't want to tick off their client by finishing up what we had started back in June. It's a certainty that the city has, shall we say, "encouraged" SMG to not sign, and if they do, they'll lose the contract for running the Pavilion.

There is absolutely nothing stopping them from inking the deal; it's the only thing left to do. In fact, as proof, they sent us the finished contract back in August and asked us to sign it and return it to them so they could sign it. Every last detail had been worked out and agreed to, deposits made and accepted, insurance obtained by us — everything.

It's clear that they don't care in the slightest. They're protecting themselves and using underhanded means to do so.

That's why a completed contract was sent for signature. But it was precisely in the gap of when we signed it and sent it back for them to sign that the city stepped in and brought all that to a halt. So we sued and have won not once now, but twice, with federal court in both instances saying the city discriminated against us and our rights to free speech and assembly because of viewpoint discrimination. In other words, they don't like what we are saying.

Not a single First Amendment attorney in the country we have spoken to has disagreed, and a few are saying this case could go down in law school books as a prime example of First Amendment Rights violation.

But the issue is no longer about the First Amendment — that's settled. It has now shifted to the venue. The city, in yet another attempt to run out the clock, has appealed to the 4th U.S. Circuit Court. However, what that appeal has done is to provide us an avenue to force SMG to perform on our contract with them.

So the city law office, run by Jim Shea (a friend to Abp. Lori, who covers up sex abuse and who lied in his affidavit to the court about his phone call with me), is the one quietly calling the shots behind the scenes here.

Although the city claims that this is about violence and mayhem that they are trying to prevent, it's really about protecting the bishops and their relationships. As we have proven earlier this week, Shea is dirty and so is Abp. Lori: Lori, for covering up sex abuse and causing seminarians and their families to actually lose their faith; and Shea, for funneling taxpayer money to this same archbishop under the pretense of charity.

The city is very likely to lose its appeal, and the 4th Circuit is likewise likely to decide that a contract does, in fact, exist between us and SMG, and they must fulfill the terms. Arguments begin next week, and since it is an emergency appeal, there's a good probability the court will hand down a decision pretty quickly.

This moves us into November, just a week or two before the rally, which we, of course, understand hampers some people's plans to attend, owing to the uncertainty. That said, Church Militant has heard from hundreds of those who had made reservations that they're showing up in Baltimore anyway.

One way or the other, whether it's on the street in front of the bishops' hotel or sitting in the MECU Pavilion beside the bishops' hotel, they've had it. In fact, many have asked us to take the lead and make this an annual event. A great idea, by the way, but please, let us get through this year's first. However, the suggestion is duly noted.

So despite the sneakiness going on between Jim Shea and Abp. Lori, who are using the fabrication about violence and death, it looks like a substantial number of Catholics will be there. That, of course, means the media will be there as well and the entire issue of sex abuse and its cover-up and accompanying financial malfeasance will be on the front pages.

And the reason it's all unresolved is because there is no desire to resolve it. Most of the men in that meeting of bishops are either homosexual or sympathetic to it and don't give a hoot about victims of homopredation. The proof we showed you earlier this week about Lori crushing a seminarian victim was from just two years ago, post-McCarrick.

So, it's clear that they don't care in the slightest. They're protecting themselves and using underhanded means to do so. And they certainly do not want this rally to go off. It's a total embarrassment for them, and they can't handle that.

Therefore, Church Militant has some suggestions for those who are thinking they need to show up on Tuesday, November 16: If we win the legal question and gain access to the MECU pavilion, then that is our event. If that doesn't work out, then whatever happens in front of the hotel has nothing to do with us

While it's still a free country, citizens can peacefully protest even if there isn't an overarching organizer, which there would be if rally attendees were inside the MECU Pavilion. No pavilion, no formal rally. But no rally does not mean no Catholics making their presence known.

But one way or the other, events like this need people holding signs expressing the reason why they are stopping their day-to-day lives and making a scene.

The fewer words on the signs, the better. For example:

When bishops emerge from their useless meetings to spend your money on SUVs to take them to sumptuous meals all over town, it's good for them to be able to raise their shameless heads and understand at a quick glance why you are there.

While it's still a free country, citizens can peacefully protest even if there isn't an overarching organizer.

The pride of these men is beyond words. They discard victims, they lie to people and take your money. They are totally detached from the consequences of their actions and are completely insulated by a crony crowd, paid for with your money.

There is no shame.

If you are able to help with our hefty legal bills, please click on the link above and donate whatever you are able. Thank you in advance for whatever help you can give.

So bottom line as of today: Church Militant is waiting on a court ruling to see if we hold our scheduled rally in the MECU Pavillion.

If we don't know within sufficient time, then hundreds of Catholics who would have been inside the MECU Pavilion will now be on the street doing their own thing with placards. But the bishops are going to see this, one way or the other. It's all in keeping with the signs of the times. 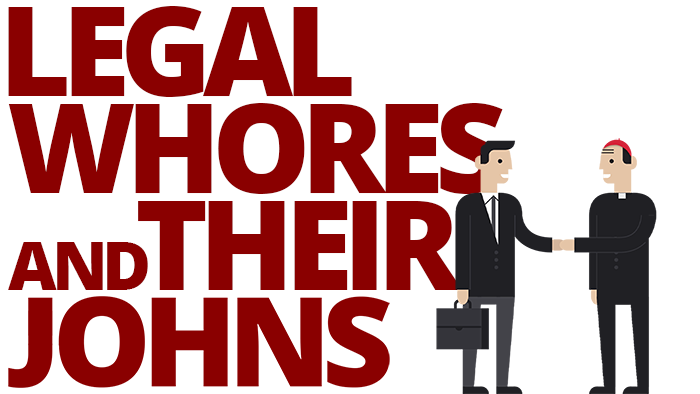 Legal Whores and Their Johns
The bishops and their attorneys have no shame!