May 3, 2018  0
Podcast Available for Premium Subscribers

The outrage properly and justifiably vented against the bishops of England and Wales over the death of Alfie Evans needs to now be directed toward the bishops of Texas and their political arm, here in the United States. The reason — their strong support for a Texas law which allows the exact same situation in Texas hospitals that doomed Alfie Evans, as well the little baby Charlie Gard, both in England. While the details and rabbit trails are all long and winding and circuitous, the bottom line is this: There is a worldwide push among establishment elites to let doctors and hospitals be the final say when it comes to treatment of patients who cannot speak for themselves.

This was the foundational principle of Obamacare — that you lose your rights to make medical decisions and the state takes them over, a law, remember, that was largely supported by U.S. bishops with the exception of the employer contraception mandate. It was, after all, existing British law that a homosexual activist judge kept throwing at the parents of Alfie Evans, denying them their natural rights to make the health-care decisions for Alfie.

Same thing with the parents of little Charlie Gard last year — doctors said end the life support. The parents said they wanted to take him from the hospital to America for treatment. The legal battle ensued during which the U.S. Congress granted little Charlie U.S. citizenship, just as Italy did for little Alfie. The courts denied the parents their God-given rights to determine the medical care, and just like that, it was over — in the space of just 10 months, two cases from England which gained worldwide attention.

In the case of Charlie, England's bishops were mostly mum, not speaking up in his defense. In the case of Alfie, they actually weighed in publicly — in defiance even of the pope — and called for the little tot's life to be brought to an end, against the wishes and natural law rights of the parents to decide which Church teaching upholds.

Now, jump the pond, as they say, to the U.S. and specifically to Texas and that political arm of the Texas bishops who, just like their English counterparts, have thrown their collective weight behind a Texas law saying, in summary, that after 10 days, the family loses the right to make any further medical decisions in the life-saving care of a patient and the decision on if and how to proceed is purely the hospital's.

What the hell and we do mean "hell" is wrong with these bishops and their support of denying parents and patients their God-given rights to make these decisions in opposition to Church teaching? And unlike the bishops of England and Wales that issued a definitive statement saying the parents needed to back off in the case of Alfie, the Texas bishops have issued a statement saying they "strongly" back the Texas law, which has been in place since 1999 and which has already led to the death of hundreds of patients of all ages, including some infants like Alfie and Charlie all over the state.

In a cold, calculating move that we reported on earlier this year, the Texas bishops publicly defamed, slammed and attacked the Texas Right to Life through a parish advisory and by extension, the political candidates it endorses. But the bishops went a step further, actually endorsing two other half-hearted, lukewarm pro-life groups who actually soft-peddle the abortion issue, as well as back the Futile Care Law. That advisory has allowed establishment RINO — Republican In Name Only — candidates to club authentic pro-life candidates over the head and to distort the truth about the Futile care law and pro-life efforts.

One such race is Texas State House District 13 between authentic pro-life candidate Jill Wolfskill and Establishment RINO Ben Leman — a Catholic. Wolfskill is endorsed by Texas Right to Life. But Leman is leveraging the bishops' attack on Texas Right to Life and hence on Wolfskill and actually sending out mailers to voters and playing radio ads saying her positions are not Catholic and the Catholic bishops of the state have denounced her.

The eyes of Texas are on this race because a lot hangs in the balance. Wolfskill and Leman are in the runoff because neither achieved 50 percent of the vote back in the primary race in March, although Wolfskill did win the most votes in a five-candidate field and beat out Leman 38 percent to 36 percent of the 23,000 votes cast. But since that time, the head-to-head race has grown more intense, with the lukewarm pro-life RINO Leman getting almost $200,000 poured into his campaign coffers from those who want toll roads through rural Texas and is using those funds to lie about Wolfskill who opposes the Texas Futile Care Law, unlike the establishment which supports it and backs Leman.

There are a number of theories as to why the bishops are supportive of the Futile Care Law, which again as a reminder, strips parents and families of their right to make decisions after 10 days and grants it to the hospital, and most of the theories boil down to finances owing to the Church's deep involvement in the healthcare industry. Wolfskill supporters are posing one simple question to voters in the 13th district: "Are you going to vote for a candidate who has the backing of the Establishment which says your natural law rights to make medical decisions for loved one should be denied after 10 days or are you going to vote against that usurpation of your God-given rights?"

The Catholic bishops of Texas are flat-out wrong on this issue, just like, exactly like, the bishops of England and Wales were dead, and we mean dead wrong, in the case of Alfie Evans and Charlie Gard. Again, even the pope backed Alfie parents. If the pope backed Alfie's parents against the British law, then the pope would also back people trying to dismantle the Texas law, and sorry, Texas Catholic Conference, but the pope trumps the bishops.

God-fearing people all over the world are sick and tired, fed up with nanny-state, globalization politics where life and death decisions are taken away from citizens and handed over to the state. And for the bishops of Texas, who sound like liberal Culture of Death Democrats on nearly every single issue, these RINO-favoring bishops will cry and stampede over the death penalty, yet throw their support behind a law which kills many, more people.

Between the sexual abuse of children cover-up that went on for decades, and their near stone silence on the issue of abortion, and the British bishops' support of the killing of Alfie Evans and Charlie Gard and now this disgrace in Texas, the question needs to arise in people's minds — and they need to get out and vote on it — do bishops harbor some animus against children who always seem to be their last concern?

It's getting harder and harder to square this circle. Are the bishops of Texas genuinely, authentically, unabashedly pro-life or are they simply political compromisers? And the answer to that question needs to come from looking at their actions, not listening to their words. They publicly denounce from the pulpits the only solidly 100 percent pro-life group in the state and throw their support behind groups and laws decidedly not pro-life and sit back silently when their words are used to beat up pro-life candidates.

Stay tuned for our Church Militant reporting on this, in what is a razor-thin tight race according to all indications. If you live in the 13th district of Texas, you have a chance to roll back this evil. Get out and vote. 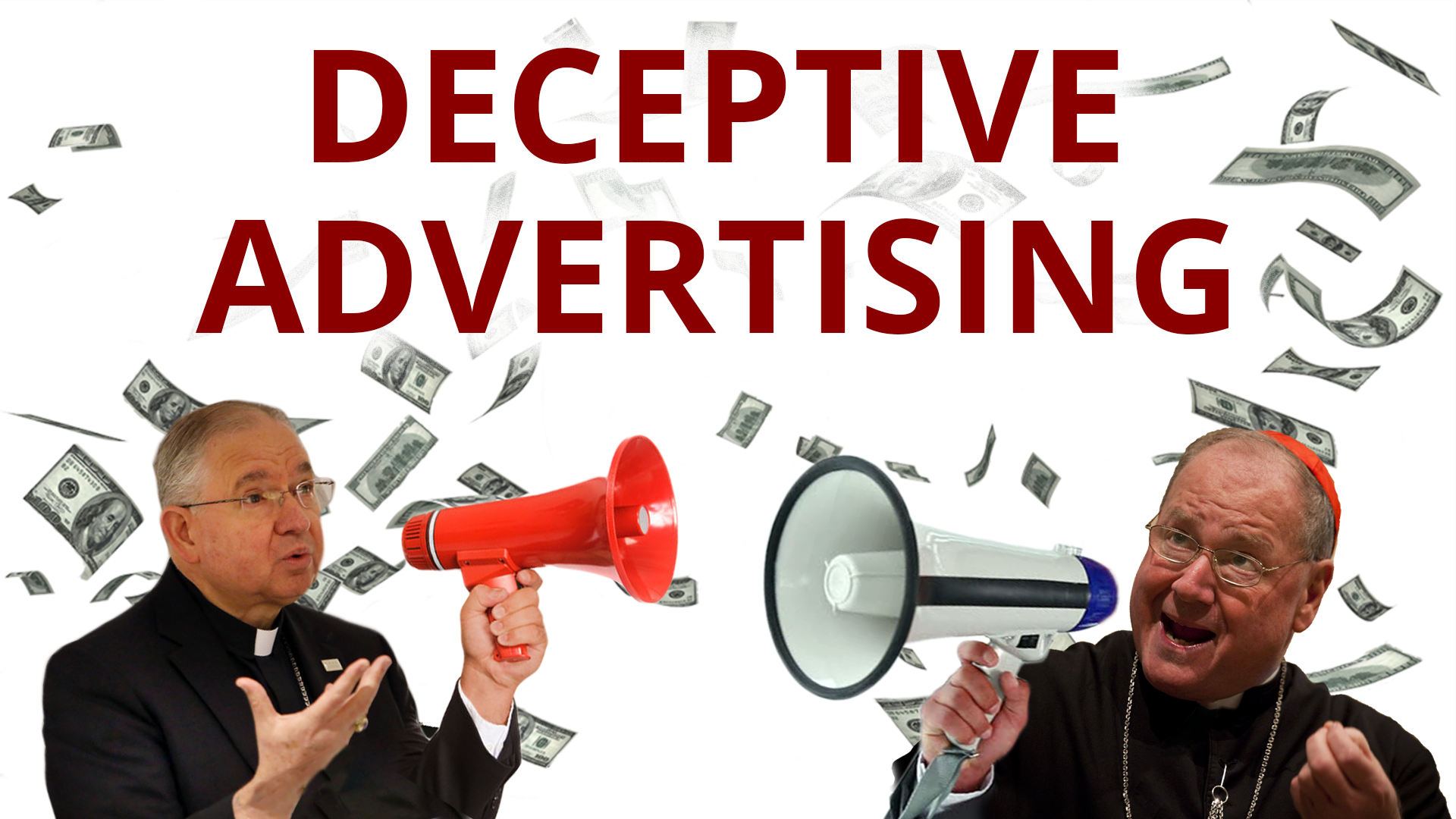 Deceptive Advertising
It's not working.