And that was six years ago!

Every few years, giant polling companies like Pew Research conduct massive surveys on the topic of religion. They do lots of topics, but the ones on religion are the focus of our work.

Five years ago, Pew released findings of an extensive religious survey where one of the questions explored was, do you think your religion is the One True Faith?

That's a fair question and — logically speaking — a very sensible one. After all, what's the point of following a belief system if you don't believe it? And that logic is an extension of the thought that, what religion worth its weight in salt would claim that it's not true — more true than any other religion? That would be tantamount to religious-belief-system suicide. So the question has a great deal of merit.

Adherents from almost every major religious Christain religious body in America were questioned — almost 30,000 respondents. Even though they are not Christian, Pew — which may not understand the difference — also included in the survey Jehovah's Witnesses and Mormons. They broke Protestants into the sub-groups of "Mainline" — meaning Lutherans, Episcopalians, etc. — "Evangelical" and "Historically black."

When all the numbers were tallied up, the results were nothing else than devastating for the Church. Only 17% of Catholics believe the Church is the One True Faith. That was almost dead last, with only the dying mainline Protestant communions scoring lower, barely at 15%, which statistically speaking is the same.

But the more outspoken religious bodies — Mormons and Jehovah's Witnesses, for example — while still only a small percentage of religious bodies in total the U.S., are among the most ardent in their beliefs. Included in any designation of ardent were also the Historically black and most Evangelicals, who each believe their man-made religion is the "One True Faith."

The entire Church in the U.S. is beyond being in a free-fall. It is reaching the point of extinction.

The ramifications of these results are obvious for the U.S. hierarchy.

First, for a Church that is the only one that could make any claim to being the One True Faith to have fallen so silent on that matter for decades raises the obvious question that needs to be asked: Do U.S. bishops themselves actually believe this dogma of the Church? If they do believe it, why have they fallen so silent on preaching it?

And now, from the time this survey was taken in 2014, a virtual wave of anti-authentic evangelization has swept through the ranks of the bishops. Evidence of that is all over the place. Here in the archdiocese of Detroit, Abp. Allen Vigneron is the major proponent of the ridiculous, watered-down "Alpha" program, which he and his staff pass off as "Catholic," but barely registers as even Christian.

When a prelate like Bp. Robert Barron appears in secular media outfits and downplays the centrality and exclusivity of Christ as being the only name under Heaven by which men are saved — like he did on the Ben Shapiro interview — the damage done from something like that is practically beyond repair.

When U.S. bishops give permission for other religions' empty religious ceremonies to be performed in their cathedrals — like both Cdl. Daniel DiNardo and Richmond Bp. Barry Knestout have both done — how is there ever any pulling back from this?

The idea becomes firmly planted in the faithful's minds that we are essentially all the same. And once that comfortable notion — and it is comfortable, because it removes all conflict — then the next logical conclusion is that any religion can lead to eternal life.

This spiritual insanity, at least among Catholics, falls right at the feet of the bishops — period.

Once a religious body has reached the conclusion that Catholic laity have and likely many bishops, indeed have — that their religion is not necessary to gain eternal life — then more evil comes flying in.

Two of those manifest evils from the Pew Polling?

Only 8% of Catholics believe following Christ — being a Christian — is necessary for salvation.

When bishops like Barron sit on a million viewers' stage and say things like "Christ is the privileged way" when asked by an Orthodox Jew if Christianity is necessary, who could possibly wonder why the Pew polling numbers are where they are?

Like so many prelates, the mantra has become "say nothing that might give offense, because honey always convinces people."

And then most telling of all, a greater percentage of Catholics — more than any other Christian religious group — believe that non-Christian religions can lead to eternal life. A whopping 68% of Catholics — more than two out of three, head and shoulders above other self-described Christians — accept that you don't even have to be baptized or believe in Christ to get to Heaven.

The entire Church in the U.S. is beyond being in a free-fall. It is reaching the point of extinction. And as long as bishops keep pandering to a "no-offense" culture, and pro-gay clerics are allowed to sashay around the country preaching the glory of sodomy, there will be no end in sight to this until that's it — it's suddenly over.

The idea that any diocese in America is actually flourishing is total absurdity. Some are doing better than others, true. But the Church is in complete collapse, and the bishops must shoulder the blame for this.

And a final note: Remember, these were results from 2014 — six years ago. We all know it's worse today.

These bishops need to be reminded of these dismal results and urged to change their lives or simply step down. 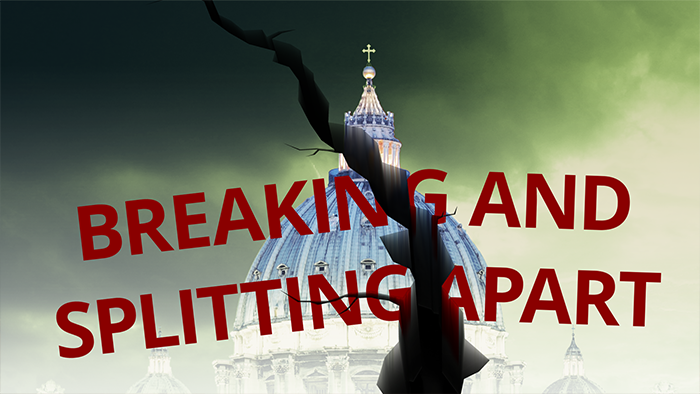 Breaking and Splitting Apart
Not always a bad thing.