And many bishops are keeping it that way.

The 1960s was the decade when things first became visible, where various symptoms of the rot in the culture were beginning to appear. If the symptoms began appearing then, the illness itself seized full hold in the 1970s. In the United States, all the structures of society and the Church began to visibly crumble. The wheels simply came off the wagon.

All over the Church, what had been hidden for the preceding decades started to come into the light and be accepted by clergy.

Seminaries were now routinely corrupt, under bishops and their staff who themselves had become corrupt — mostly sexually, although not limited to that arena.

Homosexuality became accepted, and was even advanced, by seminary staffs and faculties. So if we want to know why things are so horrible, almost beyond comprehension, in the Church today, we need to understand the prevailing lines of thought in the 1970s.

Most of today's troublemaker bishops were in seminary in the 1970s where, as young men, they were exposed to, and then accepted, the new morality.

Many of them frequently engaged in sexual activity with each other, one priest here in Detroit even telling Church Militant confidentially the Detroit seminarians in the '70s and '80s were told by the seminary staff to "keep it in house" — meaning engage in homosexual activity only with other seminarians and priests, always keep illicit activities within the seminary, or rectory, walls.

All of this was the norm here in Detroit and many other seminaries around the country while Cdl. John Dearden was the archbishop. Dearden was clear that he wanted a new type of priest, a new way of dealing with people, a new liturgy — in short, a new Church.

And this is exactly what he set in motion in his seminary, which quickly earned the reputation for being a little short of a homosexual bathhouse, for years.

One seminarian and eventual bishop from Detroit who seems to have been all too willing to rush headlong into the "1970s Church" was John Nienstedt, ordained in Detroit in 1974 by Dearden.

Just three years later, he was secretary to Dearden, so he would have had an up-close view of the operations of Dearden's new Church which he had already been extensively involved with in the seminary.

The problem with homosexual Catholic priests having sex with each other — aside from facing damnation — and trying to keep it quiet is, one, it doesn't always stay quiet, and two, not all priests stick to the priest-only rule.

Church Militant has obtained a thousand pages of official documents from the Ramsey County attorney's office in Minneapolis/St. Paul which include police records, affidavits, depositions, internal archdiocesan memos and so forth.

What they reveal, sadly, is that Nienstedt was a top student in Dearden's new Church.

Among the volume of pages — one memo perhaps sums it all up best — this from an archdiocesan official Fr. Dan Griffith:

And it would be the case of Fr. Curtis Wehmeyer in Minneapolis/St. Paul, who served five years in prison for three counts of criminal sexual conduct and possession of child pornography, which would bring to light the truth relating to Nienstedt.

Wehmeyer's case stretched back in time to Nienstedt's predecessor, Harry Flynn, who the documents reveal took a special interest in the young man and overruled concerns of a formation team about him and ordained him anyway.

Under Flynn, Wehmeyer was protected and almost immediately began his homopredatory behavior. The calls and letters started coming into Flynn, who eventually sent him away to the notorious St. Luke's, and then, once back, gave him a parish assignment. And please understand, this is normal, its the standard operating procedure for bishops who grew up in gay Church, they excuse the homosexual behavior and reassign the priests.

Why? Because they don't really think there's anything that wrong about it because this is how they were trained, and truth be told, many of them do the same thing.

Such are the allegations against Nienstedt himself, multiple archdiocesan officials, according to the documents, insist that Nienstedt overlooked Wehmeyer's actions because the two of them were sexually engaged.

Nienstedt flatly denies that claim, but the record says differently.

At the very least, Nienstedt looked the other way in Wehmeyer's case and allowed his homosexual predation to continue essentially unchecked.

The Ramsey County attorney eventually brought charges against the entire archdiocese, a first ever in U.S. history that the Church itself was charged.

Whether it was extreme negligence, or actual homosexual activity with various priests, including Wehmeyer, it all goes back to his days in the seminary in Detroit, where priest after priest was ordained accepting that clerical homosexuality — including acting on it — was perfectly fine.

And the scary thing about Detroit, in particular, is that it was known as a "bishop factory," with an outsized number of clergy going on to be named bishops, many of whom are currently serving as heads of dioceses.

This raises the very serious question: If a man like Nienstedt could fly under the radar for so long, how many of his classmates who are bishops, or men at the seminary at roughly the same time are also of like mind?

It's a question worth exploring, which Church Militant is already doing.

If you went to seminary in Detroit, and from there moved up the ecclesiastical ladder, then you are worth a full examination simply because these are the very type of men that Dearden actively recruited — men, some of whom hide behind a thin veneer of orthodoxy and yet privately engaged in homosexual activity with each other, or other corrupt clergy.

Stay tuned on this, because there's much more to tell as we travel back to the future of the 1970s, which many of these men never left. 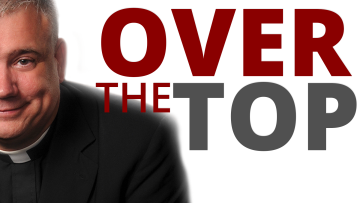 Over the Top
Fix this, Fr. Larry. Fix it.