The Age of Consent

Being used as a legal smokescreen.

One of the clearest signs of the Church of Nice and its leadership is confusion resulting from "fuzzy language." Some of the time, this is deliberate because the leaders talking want to hoodwink you, get you thinking something is Catholic when, in fact, it isn't.

A stellar example is all the talk from multiple bishops about the border wall and how immoral it is and so forth. That's not true and they know it. But if they can make you think that, then all the better for their agenda.

Another area that has come up recently is the issue of consensual sex. It is appearing more and more in various quarters of the Church because of the homopredator clergy scandal.

It first appeared on center stage last November at the bishop's meeting in Baltimore when Cardinal Sean O'Malley suggested that seminarians needed protecting as well as minors. Seminarians are generally young adults, so they are not minors.

That caused "Rabbit Hole" Cupich to hop to his feet and grab the microphone declaring that sexual abuse of seminarians would introduce the topic of consensual sex into the equation and that raised a bunch of other issues.

The Pope's man in America — Rabbit Hole himself — in no way, shape or form wants the discussion of sex abuse of young adults brought up, or even consensual sex because that opens the floor for a wide-ranging discussion of gay priests having sex with other adults.

And that simply cannot get out there. Of course, Cupich has already had to deal with this in the case of two of his priests who were caught "clericalizing" each other in a car parked on a public street in Miami.

The two priests were so "deeply engaged" with their clericalism that the cop had to pound on the car window to get them to notice him. They were thereafter arrested.

Now, with the question of consensual sex, a number of bishops and their attorneys are forming a legal strategy around this point. And oftentimes, you will hear the conflating of two entirely different points: consensual sex and the age of consent. The two are only somewhat related.

First, when the Church speaks in canon law about the "age of consent" — defined as 16 years old — the Church is speaking about the age at which someone could be married. It does not refer to the age when a person can just freely participate in sexual activity. Nor does it mean that a priest can engage in sex with someone who has reached the "age of consent" and everything is OK.

Secondly, consensual sex may or may not be moral depending on the circumstances, for example.

It might be legal if both parties consent, but the Church — and in this case, meaning the bishops and their lawyers — especially the bishops, should be much more concerned with the morality even if they are being sued.

Consent, legally speaking, implies a willing and knowing cooperation with people who are considered equal. So that immediately rules out all sorts of situations: professor/student; coach/athlete; employer/worker; officer/enlisted; Hollywood producer and budding starlet and so forth.

In each of those situations, there is a power differential which society recognizes as "abuse." Not necessarily sex abuse, like with a minor, but an abuse of power and authority for the benefit of the one holding the authority.

So in the Church, when a priest sexually engages someone in his flock — and we are not talking about minors here — be it in the confessional, through counseling, in the seminary, whatever and wherever, that is the textbook definition of abuse.

So what various bishops are doing is trying to cast some of these cases as "consensual sex" and ignore what led up to the sexual encounters and so forth. Sorry but that doesn't fly. For a practicing Catholic, a priest always holds a certain authority position simply by the fact of his ordination.

It is always an abuse of power, and oftentimes a case of sexual abuse as well. A case which highlights this perfectly has arisen in the diocese of Dallas, Texas where one of the Pope's special men, Kevin Farrell, used to be bishop.

He is now, conveniently, a cardinal in Rome, safely out of the line of fire of a case which blew up on his watch. A priest began grooming a teenage boy and continued for a number of years. He played the role of "dad" to the boy and was a mentor and so forth.

But he was also a pervert. He did a number of things over the years with the adolescent, such as buy him clothes, and then go back to the rectory and have the boy try them on in front of him.

He took multiple photos of the boy in various states of undress and even had him pose shirtless and cheese for the camera. He collected these pictures in a photo album.

He used to give the boy hot oil massages which sometimes ventured into "private areas." These happened when the boy was still in high school.

Eventually, once the boy had passed into adulthood, sexual encounters occurred, one of them being what the young man called an uninvited assault in a hotel room.

What was Cardinal Farrell's response to all this? That it wasn't abuse because the boy, once he became an adult, had "consented" and had reached the "age of consent."

He did remove the priest, Fr. Timothy Heines, but insisted that what the priest had done was a "boundary violation" with another adult.

When the boy was 29, he brought all this to Farrell and the diocese of Dallas, along with the photo album of the almost four dozen photos Heines had taken of him in half-naked and in sexually provocative poses — again, taken when he was a minor.

Farrell went all legal and stuck to his guns that the sexual encounters had happened when he was an adult and all that grooming didn't matter, even in the face of the photos. Farrell kept playing his "age of consent" and "consensual sex" cards.

This is what leaders in the Church have been reduced to because of their own lack of supernatural faith and their unwillingness to acknowledge the homosexuality in their own ranks. They have to mount their legal horses and get all "non-shepherd" and they split the finest legal hairs possible.

Yet Farrell is a special pick of the Pope, who served as Theodore McCarrick's housemate for six years in Washington, D.C. and claims to be "shocked" at the revelations of McCarrick abusing seminarians at the infamous Jersey Shore beach house.

So a question for Farrell, who is a disgrace to the robes he wears: Based on your logic, why didn't you defend McCarrick when the news broke last year? After all, it could be argued that the multiple seminarian victims of McCarrick "gave consent" by going to the house and even getting in the same bed with him.

Wouldn't that be a sound legal defense option to pursue? After all, that's the tack that the Vatican itself took in the case of the first accuser of McCarrick. They said the boy he molested in the sacristy of St. Patrick's Cathedral all those years ago was 16, the age of "consent," so McCarrick wasn't guilty.

This hairsplitting and deliberate conflating is filthy, evil, diabolical, rotten. It's mean to try and keep the homosexual perverts running the show in the Church in power and protected.

And as they continue to dream up these strategies and release their legal hounds on victims, remember that you, the laity, are paying for all this. Lawyers don't generally work for free, and this level of legal counsel doesn't work for free, not by a longshot.

All these cases, thousands of them that are being litigated by Church attorneys, are costing the laity — you and me — millions and millions of dollars, and that's just the financial cost.

The true measures, truth and justice, are completely ditched and run over — what filth, what disgrace.

Again, the truth cannot be admitted because the entire wicked empire they have constructed within the Church all these years based on sex and money would come crumbling down.

Would that some bishop, anywhere, have sufficient supernatural faith and burning desire for truth and justice and throw his predecessors under the bus, where justice demands they be tossed, and stop cooperating with this evil.

All of this is coming out. The house of cards is in the process of collapsing. The game is almost over. 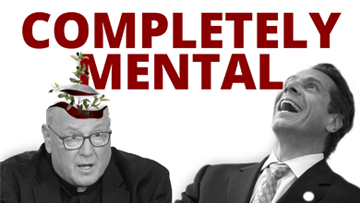 Completely Mental
Touched. Off his rocker. Out to lunch.