And it seems only God Himself can stop them.

One thing you can say about the corrupt leadership in the Church: They sure are consistent.

It doesn't matter what happens, what gets reported, what gets exposed, this arrogant lot just keeps on plodding along and thumbing their collective noses at the faithful — and most importantly God. From financial corruption to sex abuse (mostly of the homopredator kind) to cover-up of the same, nothing — and we mean nothing — deters this crowd from their doctrinal, liturgical, financial or moral incompetence and filth, acting as though absolutely nothing has happened and life is normal.

Why was disgraced Cdl. Roger Mahony given a platform at the archdiocese of Los Angeles REC this past weekend to talk about anything? Unless he was giving an up-close and personal account of how best to spirit homopredator clergy out of the country before law enforcement could arrest them, he shouldn't have been on stage.

Why did the "go along, get along," pathetic-excuse-of-a-leader Abp. Jose Gomez of L.A. permit it? Never mind; he's still coming knocking for $500 million from L.A.'s Catholics.

Why does the lying Fr. Thomas Rosica, who fabricated an advanced degree out of thin air after plagiarizing for decades — why is this man's name even mentioned in any capacity at all, other than as a defendant in civil suits? Yet there he is on the postcard mailing to the nation's priests, giving a talk for the heretic organization of clerics: the Association of U.S. Catholic Priests (AUSCP).

His topic: "Reclaiming the Priesthood of the Faithful" — which he himself is decidedly not. We should check to see whom he stole it from before he's allowed to present it.

But no bother; also on that same card is his buddy, Cdl. "Rabbit Hole" Cupich, who masterfully and skillfully completely diverted the attention away from the topics of both McCarrick and homosexuality among the clergy at Rome's phony sex summit last month — another guy who failed to report the full list of homopredators in his archdiocese.

Which brings up Donald Wuerl, a man so desperate to cling to power that even after he had to resign in disgrace continues to keep his bony fingers on the levers in D.C., as Rome just can't seem to come up with a replacement for the man. Cupich and Wuerl are in Rome just about every other week, flying first class and wining and dining on your money, while they ask you to pony up to the plate for their annual appeals.

Wuerl got caught lying — red-handed — but that doesn't matter. In fact, nothing matters with this wicked crowd — like Buffalo bishop Richard Malone, who had to pull out of the annual St. Patrick's Day parade out of embarrassment from the media glare. And small wonder; not only did he lie to abuse victims, not only did he lie when he published his list of homopredator clergy, but he just reinstated a priest with a pornography problem.

Moving further down the Empire State, we encounter Cdl. Timothy Dolan, with whom priests are completely fed up with his lies and guffaws. Whether it's trying to sweep the results from his own internal investigation under the rug, which cost a half million of your dollars, and determined that at least a half dozen current pastors should be removed immediately, or it's being featured in the N.Y. media for covering up homopredators, nothing deters Cdl. Timothy "excommunication is against gospel values" Dolan.

And of course there's Bp. Slick — Robert Barron — who has never met a hard teaching of the Church he couldn't completely smooth over, like Hell or gay "marriage." Bishop Cool is just so reasonable, we can only hope that the well-substantiated rumors are true and that he goes to Birmingham, Alabama shortly so he can have a say in furthering destroying Mother Angelica's life's work.

And when it comes to credibility issues, look no further than the bishops' collective undying support for CRS — Catholic Relief Services — recently busted for funding just about every immoral practice you can name, and supporting further funding of it all by Congress. That ought to play real well at the Judgment Seat.

Absolutely no other organization in the world would even begin to tolerate all this, much less condone it — cardinals resigning for sex abuse cover-up, the latest one just this past weekend in Chile. Not a single peep about the McCarrick file and the ongoing investigation because — oh wait — there is no ongoing investigation.

And of course, high above it all, the entire despicable crisis in the Church is the near-total silence from the supposedly good bishops, with very rare exception.

However, they are betting that there are enough stupid, uninformed, wimpy, "Church of Nice" Catholics still sitting in the pews holding hands and swaying around in an emotional frenzy that the few billion dollars they are trying to extract nationwide will still be achievable.

And speaking of the pews, one last thing. With the horrid state of affairs, Cleveland's Bp. Perez has issued a statement saying that beginning on Divine Mercy Sunday, all Catholics in Cleveland will now stand instead of kneeling from the "Our Father" onwards, including after reception. The reason? So we will all be uniform.

Well, how about being uniform in all kneeling?

And for the record, not a single Catholic is obliged to abide by that. Every Catholic has the right in the Church to kneel and receive, to receive on the tongue and to kneel during the "Lamb of God" and after receiving Holy Communion — no matter what the pastor tells you, no matter what book or document or paper from the National Conference is trotted out. Simply ignore it. Ignore them all. That has nothing to do with obedience because they don't have jurisdiction over Church Law. 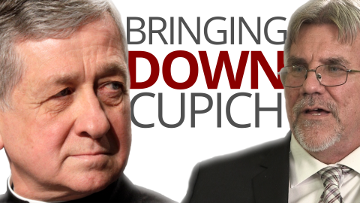 Bringing Down Cupich
He is enemy no. 1 for some intrepid U.S. Catholics.