Given the times we live in at this moment — and, to be clear, the times you were specifically created for by Almighty God — a look back at the happenings of the wedding feast at Cana can be instructive.

It was a pretty big wedding, with important people (whoever they were). There were lots of guests, which is why there were servants. And there was a captain of the feast, so this was a big-deal wedding. Of course, Our Blessed Lord and some of His disciples were with Him, along with Our Lady.

She asks Him to perform His first miracle (and thus to reveal His divinity). He complies. But it's what He does and how He does it that is our point of reflection. He doesn't just change water into wine. He does something else first. A big-deal wedding always had a series of water jars for Jewish ceremonial rules and so forth.

Our Lord could have instantly filled them with wine, but He didn't. He first told the servants to fill them with water. Now consider that — a big wedding, lots of jars, much water, no plumbing, a lot of work.

Gallons and gallons of water would need to have been hauled from the town well: Servants schlepping back and forth in the heat of the day like a kind of bucket brigade. Why? Because Divinity desires that humanity be intimately involved in the work of salvation.

Our Lord could have, but He didn't. He chose to have men first exhaust themselves in the work proper to them — physical toiling in the material world. And St. John specifically records for us that they filled the jars with water to the brim, meaning they could not do one more thing.

Divinity desires that humanity be intimately involved in the work of salvation.

They had done everything they could possibly do. They left it all on the field, to use the expression from sports. Then and only then does God say, "Thank you. Now step back and behold." It is the utmost grace to be chosen to participate with Christ in His salvation.

No, He does not need you, but He wants you. We must do everything we can do so Our Blessed Lord can involve us in what is always His work. As the psalmist says, "For it is you who have accomplished all we have done." So what precisely is it we are to do in this time and space, given the particulars of our day?

First, we must recognize the reality on the ground. Just as Our Blessed Mother saw there was no wine, we must see and understand that authentic spirituality has been drained from the culture. America is, in many ways, a moral wasteland — laid waste by a Marxist push beginning with the Sexual Revolution of the 1960s.

That revolution had as its goal the destruction of the fabric of society — the family — and most importantly, the canceling of masculinity and paternity. With the natural order of society thus destroyed, the unnatural order could be imposed by the State.

And since the natural order flows from God (God as in Father), the unnatural order flows from the demonic, from Hell, which is kind of evident when you look at various cities in America today. They look like "little Hells." However imperfectly, there is a recognition on the part of Trump that this is a battle whose most important dimension is spiritual.

For the record, the other side essentially told God to take a hike. So here we are, faced with two visions of America — two courses, two roads to take with everything on the line. In the lead-up to the election, faithful Catholics (meaning you and us) must do everything we can to fill the jars with water to the brim — electioneering, talking, getting involved in the battle. No stone can be left unturned. We must fill the jars to the absolute brim.

What we are fighting for is the survival of a culture that allows a space for religion, for God. And while that would become a whole different battle as we advance the one true Faith (which should have been done decades ago), that simply will not be possible if the other side wins.

Marxist atheism must be dealt a fatal blow — right here, now, at this moment of history. This far and no farther. Now, to that end (with all we have to do in the material world), we are not just corporeal beings. We are a composite of spirit and body — material and immaterial. So we have a duty in both areas, in each realm.

This requires, demands actually, just as intense an effort on the spiritual plane. Church Militant is announcing its own 54-day Rosary Novena on behalf of the Church and the nation beginning on Tuesday, Sept. 8, the feast day of the birth of Our Blessed Mother.

As many of you know, the entire staff gathers together each weekday morning in our chapel at 8 a.m. ET to pray the Liturgy of the Hours and the Holy Rosary. Many of you join us for that. Beginning Tuesday, Sept. 8, we will be offering the Rosary first, straight-up, at 8 a.m. ET, for the following 54 days.

The Rosary is an especially powerful weapon against Satan because of precisely where your thoughts are directed — to the life of Our Blessed Lord, the Savior, and His mission to open up the path to salvation as recorded for us in the gospels.

These meditations occur against the backdrop of the scriptural honor to the Queen of Heaven, who, as Scripture tells us, crushes his head. The Woman of Genesis was the instigator, as it were, of Christ's first miracle and is our source of appeal for more miracles.

The Rosary is like a spiritual Gatling gun reeling off bullet after bullet against the Devil.

And notice the use of the term "weapon." It is a weapon. It's like a spiritual Gatling gun reeling off bullet after bullet against the Devil. You know this already. What Church Militant is doing is trying to inspire you to join us, to take the pledge today to sign up and commend the life of the Church and the nation to the Mother of God, the Queen of Heaven.

We sent out a small advance notice of this a couple days ago, and, in just a short period, 3,000 people made the pledge to pray with us every day, starting Tuesday, Sept. 8. So now we are making the invitation official and more far-reaching: Please click on the provided link and take the pledge!

Of course, not everyone will be able to pray with us live at 8 a.m. ET every weekday, but those of you who can are strongly encouraged to. But whether you pray with us live or on your own, please join with us spiritually. We are the Church Militant — that dynamic of the Church still engaged in the battle, and this battle is ferocious.

No matter how much water the servants brought to the jars at the wedding feast, only Heaven could make the water become wine. So we need to do both the material and the spiritual. Time for the big guns.

And, on top of it all, after all the attacks against various images and statues of Our Blessed Mother during the communist-inspired attacks, what a lovely birthday present to give our Mother and Queen — a promise to pray for her to crush the Serpent's head.

Remember, as all loyal sons and daughters of the Church know, Heaven is never outdone in generosity. Fight in both worlds — the material and the spiritual. Fight, Church Militant, fight. 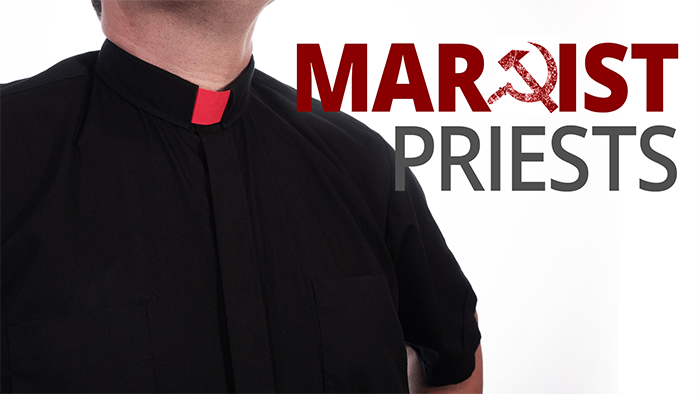 Marxist Priests
And they hate Trump.