He reflects them, and they reflect him.

Every now and then, the masks drop on evil and it becomes as clear as day who and what is behind that mask. Americans just saw a "mask-drop moment" last Thursday when communist, senile Biden excoriated 80 million Americans. There are really no words to describe what the country saw from that dictator. To think that any president would even dare to talk to citizens like that says everything you need to know about the state of mind of the forces that control this unelected imbecile.

Listen to what this man — the same one who never stops yammering on about the freedom to slaughter your own child and the personal choice needing to be between you and your doctor — has to say about being pro-choice when it comes to his so-called vaccine: "This is not about freedom or personal choice. It's about protecting yourself and those around you."

Who do you think you are, Biden, to order Americans to submit to a shot that clearly 80 million have simply chosen not to get?

To think that any president would even dare to talk to citizens like that says everything you need to know about the state of mind of the forces that control this unelected imbecile.

If the vax is so effective, then why, if you have it, do you care if I don't? Aren't you protected? And if you aren't, then your vax doesn't work very well, does it? And if that's the case, then why should I or anyone want to shoot it into our bodies?

That arrogant dictator stood up in front of the American people and tried to create two Americas and to instigate a majority of Americans to start looking at a significant minority of Americans as though we are wearing yellow stars. It's clear that some other agenda is at work here.

Child killers, who want to actually expand child killing, are clearly not motivated by the preservation of life and health. They don't care about life. They care about power — raw, naked power. Precisely what they want to use that power for can be argued, but since the Devil is their master, it's clear it won't be for anything good.

No one can say for certain whether being forced to take a shot in order to have a job or buy and sell and so forth is the unfolding of the Mark of the Beast spoken of by St. John, but if it isn't, it's hard to imagine a better trial run for it. And as we turn to the question of religion, never forget that Biden is a creation of the U.S. bishops. In every single respect, he is the bishops' boy.

Even to this day, with a known child murderer sitting in the Oval Office using his authority to enhance the murder of innocents; a sick man who officiates at homosexual ceremonies; who enlists known atheists and perverts into his Cabinet and all levels of government; appoints haters of religion, God and faith to high government posts — even with all that, those monsters in miters still allow him to trot around the nation he seeks to destroy as a "Catholic in good standing."

Biden doesn't believe the authentic Faith and neither do they. They propelled this man into office by their refusal to say a single word about his monstrous evils while he was campaigning and went so far as to actually punish priests who did speak out against these evils. The U.S. bishops wanted Biden in the White House. He belongs to them.

These aren't good-hearted bumbling fools who just keep making bad choices. While God may protect drunks and fools as the old saying goes, He does not protect those who actively work against Him to bring about the ruin of others. Even now, they still allow God to be delivered into the hands of this dictator and don't say a word. It's sacrilege heaped on top of sacrilege.

The idea that there is still hope for someone as long as they are breathing needs to be correctly understood. A man who perpetually falls into sin but just doesn't have the will or strength at a given moment to tear himself away from that sin, such a man is still fertile ground for conversion or reversion. Actual grace can still be operative in his life because there is something in that man for the grace to seek cooperation with — his conscience. The voice of God in the deepest recesses of his soul can still be heard, even if it is faint. The echo of God calling him to repent remains.

And as long as the man allows Our Lord's loving voice to remain, even if part of him doesn't want to hear, as long as he does not turn it off, does not embrace his sin, then, of course, there is hope because Our Lord has something to work with.

But contrast that to the man who actually opposes God, embraces his sin, loves his sin. He has deadened his conscience, not merely ignored it, not merely become squeamish and wishing it would quiet down, but actively killed it. Precisely how does God correspond to such a soul, correspond without overpowering his free will, which God would never do?

We don't know with any precision which ones have embraced their sin and are willing enemies of God. God knows, but we don't. However, at some point, it becomes reasonable to look at actions as a determinant of what's going on inside a man. A man who still has something of goodwill left in him telegraphs that, even unknowingly.

You will see the spark of good in him, the struggle, the back and forth. Something will manifest on the outside to show his remorse and desire that his life be different, his life be good. But the man with no goodwill will never manifest such a desire because he has no goodwill within him to manifest. You cannot give or show what you do not have.

God, of course, loves these wicked souls. He desires them to repent and be saved. The problem is, they don't. Since Hitler seems to be the favorite example of everyone when great moral issues are raised, let's turn to him. If Hitler could have simply continued living in his state of seeking world domination, extinction of anyone he deemed unfit to inhabit the earth, does anyone seriously believe that he would have changed his mind, reversed course, come to the realization that he was guilty of monstrous evil?

Without such a conviction in his heart, he was damned. Remorse for your evil turning out badly is insufficient for salvation because you are not sorry for the sin, you are sorry for the outcome. This is the difference between the thieves on the crosses on either side of Our Lord. If Pontius Pilate would have commuted the sentence of Dismas the Good Thief, he would have amended his life, and Our Lord knew that. So, as Bp. Sheen put so beautifully, he is the thief that stole Heaven.

The U.S. bishops wanted Biden in the White House. He belongs to them.

The other thief, being only remorseful and not repentant, had no access to the divine grace because he would not have amended his life and Our Lord knew that as well. His cry to "save us" was only a cry to get off the Cross "so that I can continue robbing."

God does not grant grace so that people can use it to sin. Sooner or later, He withholds that grace to prevent any further insult to His divine majesty. At that point, hope vanishes, and it is entirely the fault of the soon-to-be damned, not God.

On his deathbed, Ted Kennedy, another creation of the U.S. bishops and soaked in the blood of tens of millions of babies, issued a letter pleading with the U.S. Senate to pass Obamacare, a letter his fellow Herods used as a rallying cry to pass in the dead of the night. It isn't even clear that Kennedy had remorse for anything, much less repentance. Like Hitler, we could ask, "If Kennedy had suddenly been physically healed, would he have gotten up from his deathbed and committed his life to truth?"

Just as we are able to intuit holiness among the soon-to-be-saved, we are able to intuit evil among the soon-to-be-damned. Our intuitions may not always be true or exact but they are not meaningless. When you look at the U.S. hierarchy and Joe Biden, you see very little reason to hope in their eternal salvation. They are born from the same cesspool and be it cowards, wicked or power-hungry, it matters not what the case is for each individual because there are millions of paths to Hell, but only one to salvation.

What's coming into frightening focus for many is just how broad and encompassing the paths to Hell actually are and just how narrow and harrowing that path to Heaven is. 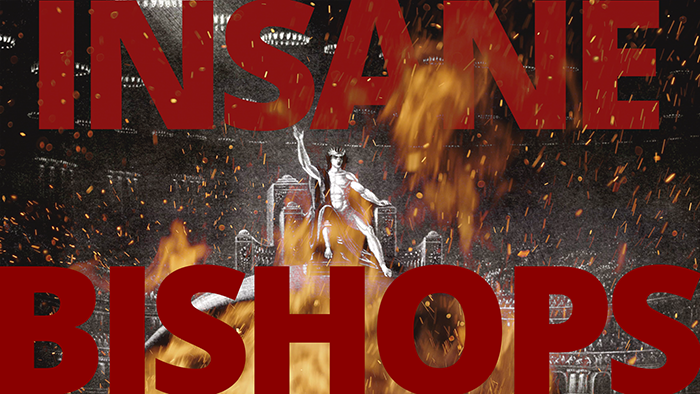 Insane Bishops
The hierarchy of the damned.