(As a reminder, please join us in our 54-day Rosary Novena in the run-up to the election.)

Among all sorts of issues that Catholics have to consider in the election, one getting knocked off the front pages is the effect on the Church by an unchecked communist China cooperating with the Vatican. Here is a very important consideration — even beyond abortion and the courts — if Trump is defeated, who will keep China in check?

Biden certainly won't; he's been in bed with them for decades. Nor will anyone in the Biden administration; they are all down with globalism and Marxism. Secretary of State Mike Pompeo, in just the last few days, has been hammering the Vatican, calling on Pope Francis to step up and be much more of a force resisting the Chinese communists' human rights violations — which include violations against Catholics.

But if anyone is looking to Rome to tame Beijing in the coming years, look again. Forces in the Vatican have made it quite clear that they are down with the communists, fine with being used as cover for the greater goal of Beijing of world domination.

They have found in this papacy what would normally be a very strange ally, but given the extreme leftward tilt of Rome in favor of socialism, it actually makes sense. It is the most unlikely forging of relationship, but it is, nevertheless, close to being set in stone.

Biden has himself forged a long history with the murderers who run China and kill their own people. Resultingly, China is cheering for a Biden victory. And why wouldn't they?

Godless, atheist communists are sitting down with the Catholic Church with the future of the world hanging in the balance.

The two most powerful enemies of the godless State could both be taken off the board within months of each other. And China itself wasn't even the main provocateur in setting up the board. It was Russia.

The Beijing commies are merely basking in the afterglow of Russia's handiwork. It was the old Soviet Union who first set about to destroy both Church and America, penetrating the inner sanctuaries and institutions of both. The Chinese are simply profiting from all the Soviets' hard work, beginning a few decades earlier. Beijing is actually something of a Johnny-come-lately to all this.

But as China sat back patiently and watched to see who would win the Cold War between the Soviet Union and the United States, they were also quietly planning to take on the winner. America won and became the target of the Chinese globalists. And yes, communism is a globalist issue.

So with America in the crosshairs of Beijing, the strategy became important. America could not be defeated militarily, so a plan unfolded to make nice with Americans — especially American companies and politicians who would work together to create policies favorable to all parties concerned.

All parties, that is, except the American worker. He would be the one to get shafted in this deal. And the supreme shafter was Joe Biden, a man who sold out his country to China, much like he sold out his Faith to the Marxists back in the United States.

And he's "Catholic," which puts a whole strange twist to the reality that China is also courting the Church and (according to at least one leading Italian economist) paying Rome $2 billion a year, every year, since 2013 for the deal crafted by homopredator and former cardinal Theodore McCarrick.

The range of this evil goes so far it's dizzying. McCarrick even had a prominent role given him by Biden at the funeral Mass of his son in 2015. Biden, China, Rome, McCarrick — all knotted together: One giant ball of evil yarn.

And behind them, the worldwide abortion lobby, the United Nations, George Soros and every other evil-minded organization posing as good and humane.

Think for a moment about Biden: He has sold out his Faith for career advancement; he sold out the country for personal gain (just ask Hunter); he sold out America to curry favor with large corporations offshoring American jobs. And he did all of this in conjunction with all these other players, which now includes the Marxists in Rome (the presence of Pope Francis having given them permission to operate in the open).

So they give China an air of respectability with the China-Vatican accord from two years ago in exchange for huge secret annual payouts — hush money, in essence. And China gets to tell the world to look the other way while it steps up persecutions and bulldozing of churches.

The destruction of the middle class and the U.S. economy, the unleashing of the Wuhan virus on the world in time for an election that was a shoo-in for Trump before that, a longstanding, decades-long relationship with Trump's opponent, and — as icing on the cake — an accord with the Vatican crafted by a Marxist ex-cardinal.

No one would believe this if it weren't so believable — because this is how Satan operates, quietly stitching together all sorts of seemingly unrelated things, all of them moving to one final, dramatic exposing. And one of his favorite tools, weapons really, is politics. In the political world, he frequently finds his own children, willing to sell their souls to him.

But that is where we are: On the precipice of a world takeover by Marxist ideologues who will have nothing to stop them if Trump loses.

If anyone would have told you 10 years ago that 10 years from then, the only thing standing between a communist alliance involving the Vatican and a fake Catholic politician taking over the world would be a New York billionaire playboy who suddenly found religion and patriotism, you'd have died laughing at them.

But that is where we are: On the precipice of a world takeover by Marxist ideologues who will have nothing to stop them if Trump loses. Even if he wins, they will still press ahead because they will still hold almost all the cards — the media, the schools and many churchmen.

The forces of anti-God have gathered; they have collectivized, and nothing is left except for them to win an election that they are prepared to cheat like mad to win. Isn't it interesting that at the heart of the entire fiasco we find Catholics connected to every last bit of every last line item?

A crooked Vatican, a phony presidential candidate, a feckless hierarchy made up of gay men and cover-up artists who allowed the Church and nation to be submarined. And polls show Catholic voters are pretty much split on a Biden-Trump race.

Satan understands his enemy here on earth. He understands how to fight. He knows the tactics and deploys them with precision. It's just too bad that so few Catholics do, that they fail to see all the connections. 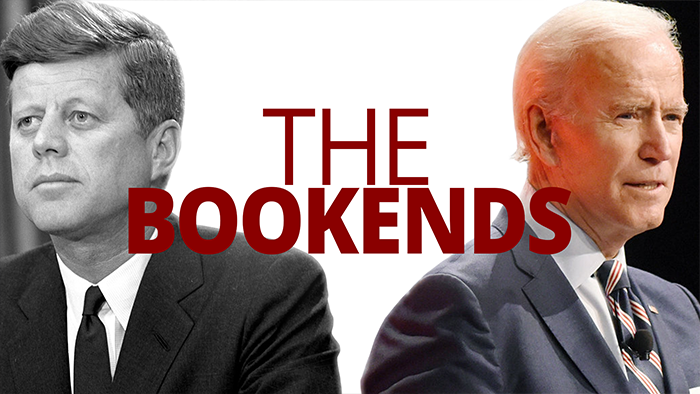 The Bookends
Catholics on each side.