It's about to blow wide open.

The latest controversy centering around Fr. James Martin and his pushing of all manner of gayness in the Church under the guise of compassion for same-sex attracted Catholics is really causing the battle lines to be drawn in what is a civil war for the soul of the Church. Prelates and clergy are choosing up sides and a large number of cardinals, archbishops and bishops, as well as many of their priests are on the wrong side, meaning the diabolical.

Fr. Martin is spreading heresy, claiming such things as gay marriage is fine and that gay men should kiss each other in Mass at the sign of peace, although to be fair, that probably happens more frequently than most realize when two or more priests are concelebrating, and that's because of the hugely disproportionate number of homosexual men who are ordained. And that is the consequence of all the gay men who were recruited for the seminary in the 1970s through the 1990s who have since been ordained and moved up the ecclesiastical ladder.

This is true not just of parish priests and chancery officials but also of religious orders — the Jesuits being one of the orders most infected. This is evidenced by the official communique issued this weekend over the whole Martin controversy by the Jesuit leadership in defense of all things Fr. Martin and his gayness. You may remember a couple of years ago Church Militant produced a Vortex on this very subject — rampant, homosexuality in the Jesuits.

In March of 2015, the online site The Daily Beast published an article by a 35-year-old former Jesuit seminarian. It was a tell-all about his time in "formation" with the Jesuits, the order he calls the "most progressive and gay-friendly religious order in the Church." Here are some quotes from his article:

Of a sexually active relationship he had with a fellow Jesuit seminarian, he writes, "Before long we were skipping meals and paper writing and finding our usual spot on the campus of St. Louis University to embrace, and kiss." And then getting to the heart of the matter, he writes:

I could go on and on about gay Jesuits playing the piano in the West Village's Duplex or about the nights I spent at NYC's Splash Bar or Eagle Club. I could talk about how older gay Jesuits swam nude during summers at villa homes, about Jesuits who groped each other in hot tubs or Jesuits who were gay in the order but who are now safely married. I could talk about gay Jesuits that had online avatars and memberships to gay online dating sites. I could talk about failed Jesuit hook-ups, my own and others. There were the gay Jesuits who were so closeted that they hid behind conservatism, leaving the Jesuits for formation programs in dioceses across the United States ... or whose personal collection of pornography was mistakenly played during high school lectures. I myself was groomed for sex by several older Jesuits. ... [O]ne gay Jesuit offered to marry me as I departed the Society of Jesus.

He left the Jesuits, as well as the Faith — he's now Episcopalian — not because he was disgusted with the rampant homosexuality but because of the hypocrisy surrounding it. The point of his article wasn't to say there are many, many active homosexuals in the Jesuits but that many of them are closeted because they don't want to risk giving up the good life.

In one revealing passage, he says, "I believe these gay Jesuits won't come out because they live comfortable lives with access to so many things like the latest technology or villas abroad or tenured positions at universities, not to mention the unlimited gas cards that make domestic travel really easy." This is an inside look from an insider not disgusted by the sin — far from it — but by the hypocrisy of fellow Jesuit homosexuals who will not come out of the closet and trumpet homosexuality as a great gift from God. He says they are just sponging off the society, having their sexually active affairs and living the high life and refusing to say whether they are gay or not just like Fr. Martin refuses to.

In fact, Fr. Martin has been specifically ordered by his superiors not to reveal his personal sexuality and yes that's very telling. These men are leading others into sin right along with themselves. And they preach and teach and are given various posts and run universities and theology departments and write books and speak on the lecture circuit and ultimately deform the Gospel.

Leaders in the Church know this goes on and yet defend these men, publicly backing them and accusing apostolates like Church Militant and others of being demonic, sowing division and all kinds of nonsense like that. Anyone with even one good ear attuned to affairs on the Church knows with absolute certainty that all this is, in fact, the case. No question about it. Notice the lack of any denials about the predominance of homosexual men in the clergy, especially the lack of denials that many of them are practicing homosexuals because they are.

And it's not just the Jesuits. And it's not just the male religious communities. Women's religious have been overrun by lesbians and those friendly to the agenda. And it's not just the orders, either. This infection is rampant in dioceses all over the country and many parts of the world as story after story keeps revealing. There are many issues in the Church that need cleaning up, and this one is near the top, regardless of how wimps at the Establishment Church of Nice like to play it. This is civil war, Catholic gay civil war, and it's breaking out into the open.

Those in the Establishment Catholic Church, meaning those who run so-called journalism outfits and various institutional organs within the Church who aren't necessarily down with this gay push but nevertheless either go along with it, defend it or are silent about it, you need to be reminded that this evil, and that is what it is, leads souls to Hell and when you die, you are going to be judged on this whole filthy rotten business and how you were complicit in these clerics' evils.

Evil does not prevail forever. Stop worrying about your careers and pensions and pleasing your bosses. There's only one boss you need to concern yourself with. Fr. Martin spreads evil and heresy, and he has many allies. Now, who's side are you on? 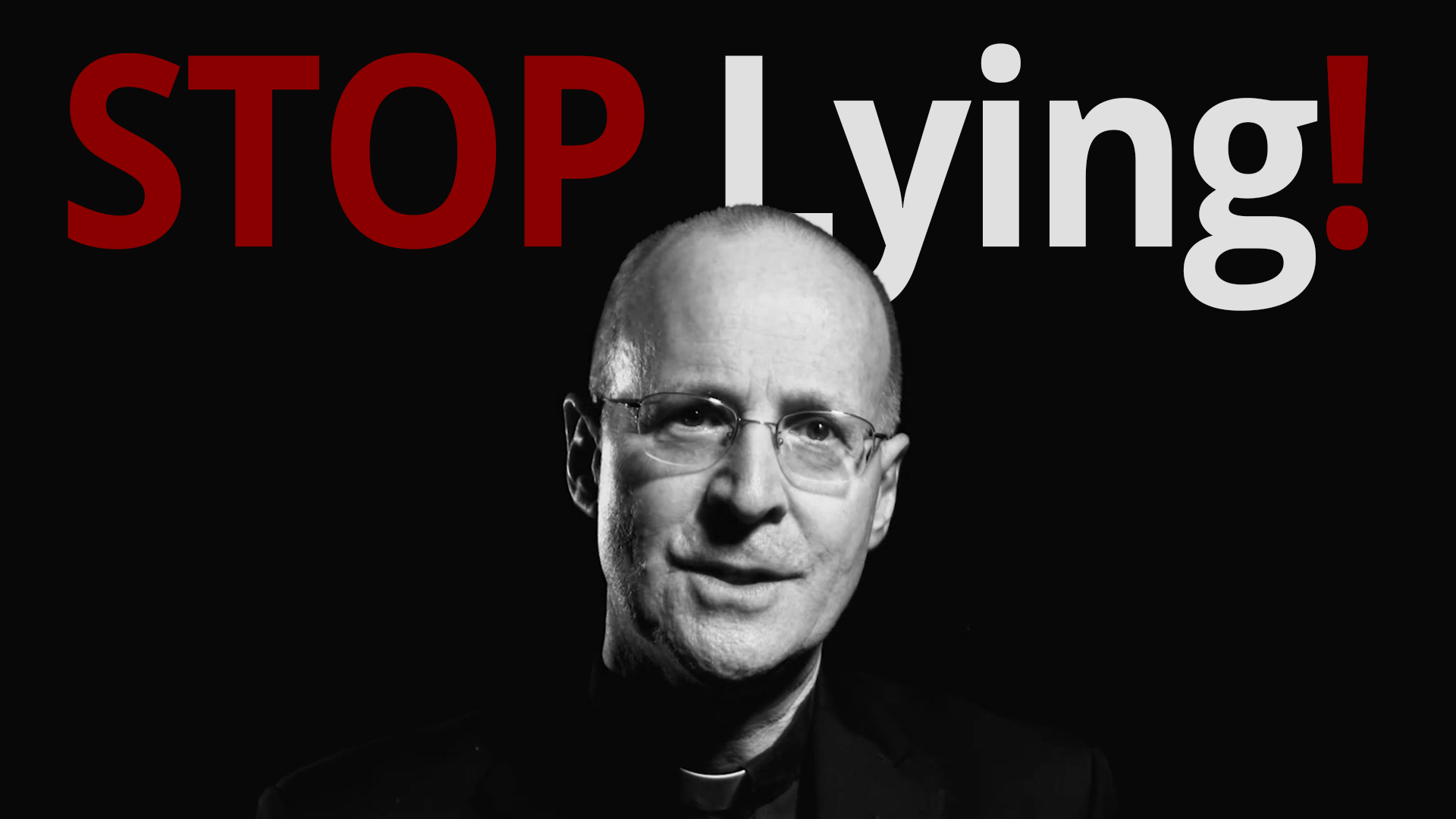 Stop Lying!
So many lies.