Treason against tyranny is the work of God.

If you take the "official" total numbers of votes cast on election night, which we can't really rely on (at least their distribution), we have roughly 155 million votes cast. How many of those were Catholics who voted for Trump? Well, the math is pretty simple.

Twenty-three percent of the vote was cast by Catholics. That's 35.5 million. Fifty percent of Catholics voted for Trump, so that's almost 18 million —18 million Catholics who could be counted, at least in general terms, as patriotic and at least somewhat-believing Catholics.

Venerable Abp. Fulton Sheen, one of our heroes here at Church Militant, was precisely this sort of man: A solidly faithful Catholic and a patriotic American. No grass grew under his feet. He understood the dangers to humanity posed by communism. He railed against the communists frequently.

That was in the 1950s into the 1960s. Given the constant threat of nuclear war and the Red Scare, he had an audience willing to give him an ear. And listen they did. Of course, that was before the communists had taken over all the institutions of the culture. True, they were busy actually doing it then, but they still hadn't accomplished the goal as they have now.

Old America is gone. New America can finally drop the disguises and make itself known.

Back then, Sheen was viewed as a patriot. Today he would be a traitor. He'd be a "racist" or "homophobe" or simply be assigned the overall generic condemnation of a "hater." But in political terms, he'd be viewed as a traitor — not to America, but to the new America. And the new America is being ushered in.

Just look at the cover of the latest edition of Vogue Magazine, with Harris on the front. Look at that sub-headline: "And the New America." We are all being conditioned to simply accept the new reality. Old America is gone. New America can finally drop the disguises and make itself known. And, if you oppose it, if you cling to the old, patriotic, racist, hating America; you are a traitor.

There is a very important point to recall with all of this — this designation of being "treasonous" or being a "traitor." Treason is what Our Blessed Lord was executed for by the State. It was not blasphemy, the original charge brought to Pilate by the Jewish religious leaders. Pilate couldn't have cared less about Jewish religious laws. That's why he dished Our Lord off to Herod for a trial.

When Herod, also unwilling to involve himself in anything of a religious squabble, returned him to Pilate, the Pharisees suddenly changed their entire strategy. No longer was it the case that this man had broken their law. It was that He set Himself up as a king, and the only kingship they recognized was that of Caesar: "We have no king but Caesar."

That is ultimately why Pilate ordered that Jesus be executed, not blasphemy. And since that made Him a criminal in the eyes of the empire, He was given the empire's punishment for treason. This has been the record of nearly all persecutions in the Church: Followers of Christ sooner or later run into loggerheads with the State, as the State degrades and adopts immorality as the official, legal, status quo.

It's happening right now in China as it happened in England during the reign of Henry and Elizabeth, as it happened all over Europe during the Protestant revolt once they had attained control of the State. As a hopeful note in all this, this is the precise reason Our Lord returns as Judge on the Last Day. A judge metes out justice. And that means giving to each man according to his due.

The last day Our Lord was physically seen on earth, he was regarded as a traitor, a threat to the established order. He was unjustly accused, tried and executed. The first case of justice being administered will be his own case. The world last saw Him as a criminal. The record will be set straight, and then every case of injustice will be set straight.

The convicted, executed criminal will return to be the judge (as it should be, obviously). The greatest injustice ever perpetrated on earth will be the first to be corrected. All others will then follow. And that means all. None of us knows what lies ahead, how events will unfold. We do know that, whatever may come, good or bad or something in between, our ultimate loyalties lie with Our Blessed Lord and His Holy Catholic Church.

Remember that when standing in front of Pilate, Our Lord said to him, "I came into the world to bear witness to the truth. Whoever hears the truth, hears My voice." That statement is what resulted in Pilate handing Jesus over to be crucified. It was his inner sense, his intuition that something that was a massive challenge to the established order of the empire was standing in front of him.

He didn't need to completely comprehend everything — no human does. It was enough that he grasped, sufficiently that he made a choice. Our Lord was not executed because He was the Messiah and ticked off the religious leaders. He was executed because truth is the antithesis to tyranny, even at the cost of blood.

Since Our Blessed Lord is truth, truth is ultimately victorious. Witnessing to truth is witnessing to Our Lord. We in the West have never really faced any of this or even had to seriously consider this in anyone's living memory (unless, of course, you are an immigrant to the United States from the Soviet Union).

So the specter of all this is greatly disturbing. Even the potential is soul-disturbing. But Our Lord never lets those He loves endure anything without the necessary graces to withstand it. On that, we have His promise, and since He is truth, that should counter all the anxiety and soul disturbance we may encounter as events roll along.

Many people, Catholics and patriots (and, most especially, people in both camps), are feeling alone or abandoned, perhaps even orphaned. Not a few have written to us and said, in sum, "How, after all these Rosaries and novenas and everything, could Our Lord have let this happen?" This is more than understandable, at least humanly speaking, but remember, God is never outdone in generosity.

If we could suggest one possibility here: For years, an increasing number of Catholics have grown disgusted at affairs in the Church, especially at the hierarchy, composed of the complicit or cowards or corrupt men. We have prayed, protested, held rallies, written letters, withheld contributions and have done anything and everything else we can imagine to try and make our voices heard that a return to holiness on the part of the hierarchy is required.

Likewise, on the political scene, how many men of goodwill have stood in front of the child-killing centers, sounded the alarm about the moral decadence the nation has fallen into, the corruption of the minds of the young and so forth. Married to all this earthly action has been a persistent torrent of prayers to Heaven to, in short, "make things right."

As things collapse, innocent people will be swept up in it.

Perhaps the only way left for God to "make things right" while leaving intact the free will of wicked men is to allow it all to collapse under the weight of its own evil. Pope St. John Paul once wrote that evil eventually consumes itself. That is true. There are even hints and signs of that within the Marxist Left as we speak, as factions race against each other to embrace even more evil and tyranny.

Of course, as things collapse, innocent people will be swept up in it. In fact, in many ways, they may be among the first to feel the impact of it all. It all feels "unjust." And that's because it is. But injustice and lies do not have the last say. Returning to Bp. Sheen, a devout Catholic and headstrong anti-communist patriot, he said, "Satan has his hour. But God has His day."

All the prayers, Rosaries, novenas and so forth offered by the millions — perhaps tens of millions — will be used by Our Lord in a manner we may not have first thought. Not a sparrow falls from the sky without our Heavenly Father's consent. He will provide. We don't know right now what the circumstances will be, how they will occur, what the need will be.

But we do know that the God-Man who tenderly spoke these words to His Apostles a short while before His passion began, means them to be taken to heart until the end of time, "I will not leave you orphans. I will come back to you." 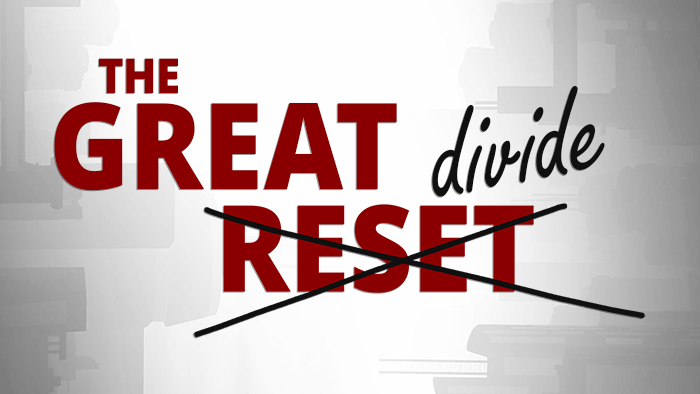 The Great Divide
It's all about God.