The Church Has Been Infiltrated

And is close to being overthrown.

As the Church in America continues down the road to ruination, a discussion has arisen in some quarters about the repeated reports that what got the ball rolling on all this was a Communist plot back in the 1920s to put young communist agents into Catholic seminaries.

Reports all point to a woman, former Communist Party member Bella Dodd, who told numerous individuals and large groups that specific story: that shortly after coming to power in the Soviet Union, Joseph Stalin communicated to communist parties in various countries to infiltrate the Catholic Church.

According to Dodd, he specifically instructed that the young men should be at the very least immoral, and preferrably active homosexual.

This was precisely what the esteemed Alice von Hildebrand told Church Militant three years ago in an exclusive, on-camera interview.

Dodd had converted to the Faith owing to Bp. Sheen and had become friends and a confidante of the von Hildebrands. One afternoon, in their New York home, when Deitrich von Hildebrand was lamenting the state of affairs in the Church, she explained to him how it had begun.

Stalin, soon after he came to power, ordered his cronies to invade Catholic seminaries ... with young men that had neither faith nor morals. Now ... the ideal cases: homosexual. Obviously, you don't suppose that someone ... well, it's much more complicated, you know, to have an affair with a woman. But if you're a homosexual, and then it was a tragic mission ... .  [Dodd] declared publicly — I repeat, publicly — that in the course of the 20 years of activities for the Communists, she recruited some 1,100 young men.

So there is a bit of debate whether Dodd's story is true or not — and frankly, there is no way to substantiate it. What is known is she did tell large numbers of people; one couple from Texas has even signed an affidavit which Church Militant has been given, testifying that Dodd told them.

Additionally, as you just heard, she told the von Hildebrands as well. Others have also been public about hearing Dodd relay the same information. So there is no dispute that she claimed this all to be true. What is being debated is whether her claim itself is true.

As we said, there's no way to know this one way or the other, not this many years removed from the reported activity. However, what we can do is look at the current state of affairs in the Church and ask, does the story have at least some plausibility? The answer to that is a resounding yes.

And it is yes because it is a simple, undeniable fact that marxist, communist ideas have come to be commonplace in the Church, especially among the clergy and the hierarchy — especially in this pontificate.

Did communists infiltrate the Church? Absolutely, beyond a doubt. Did it begin with Bella Dodd and her role? The answer to that question at this point no longer really matters, beyond historical curiosity.

Church Militant learned exclusively and reported earlier this year that in the immediate aftermath of World War II, the Soviets established a network of indoctrination centers — more than 30 in all, all over Europe.

Church Militant communicated with the former communist agent from Poland who was one of those instrumental in establishing the centers. One of those centers was in St. Gallen, Switzerland, the same location that the now-dead and corrupt Cdl. Danneels specifically said the plot to elect Jorge Bergoglio to the papacy was hatched many years ago.

Saint Gallen is also the place Theodore McCarrick first visited in his youth and not only remained for an entire year, but also returned to year after year for decades.

It was McCarrick, the potential communist plant, resurrected by this socialism-friendly pope, who struck the deal between Communist China and the Vatican that has brought such misery to Chinese Catholics.

Liberation Theology — the evil approach to Christology explicitly condemned by St. John Paul, and which is now roaring back under this pontificate — we have come to learn was planted into South America by KGB agents specifically to undermine the Catholic Church.

Almost to a man, the entire Jesuit order has converted to some form or another of marxism, and true to marxist form, is using its vast network of more than 300 colleges and universities to poison young minds and produce young socialists.

The founder of the Italian Communist Party, Antonio Gramsci, specifically said that for the ideals of Marx to be spread throughout the world, the Catholic Church would have to be destroyed.

Now we hear from the Vatican almost non-stop attacks against politically conservative, theologically orthodox Americans, accusing us of being greedy capitalists, racists, xenophobes, climate changers, immigrant-haters — Pope Francis even going so far as to have said recently that he welcomes attacks from Americans.

Unfortunately, tthe current Vatican Vogue is echoed nearly daily by weak-minded cowardly bishops in the U.S., who continue to push the talking points of the Democratic Party, which is now itself going through the pangs of converting into a socialist party — a conversion not yet complete, but nearly.

It's why the Democratic debates so far have been so raucous, as the younger socialist set are seizing more and more control, and the old guard, like Joe Biden, are wrestling ferociously with each other.

Too many U.S. bishops are in lock step with the Democratic socialists, and both those bishops and those Democrats are too heavily influenced by a smorgasbord of marxist, socialist, communist ideas — which brings us back full circle to the question of Bella Dodd and her self-admitted activity of placing American Communist Party agents — 1,100 in all — into Catholic seminaries beginning in the mid- to late 1920s and continuing for approximately 10 years or so.

Close to a hundred years after the reported activity was launched, what do we have? A highly corrupt and immoral hierarchy, with deep involvement in the homosexual world, actively and passively destroying Church dogmas, eroding faith in nearly everything Catholic by sowing doubt and confusion, warmly embracing socialist politics on a large number of issues, striking deals with communist governments which result in horrors for Catholics in those countries, sitting atop a virtual empire of lies and deceit and cover-up in literally thousands of places around the universal Church.

This communist evil which has infiltrated the Church is present in nearly every location you can imagine, right down to an enormous percentage of local parishes.

The Communist scourge has been set loose within the walls.

Good priests who remain authentically Catholic are persecuted or have to go into hiding so as to escape the reach of their superiors who wish to silence them because they will not bend to marxist/communist precepts so dominant in the Church and the culture.

A warning to faithful Catholics: When Communism, Marxism, Socialism gain significant enough control, the Church ends up attacked and persecuted, for the goal of Communism is world domination, which is the same goal the Church has. The only difference is the weapons employed. Communists use lies and violence. The Church uses truth and peace.

We are in momentous, never-before-seen times, and faithful Catholics need to realize exactly what's playing out here. 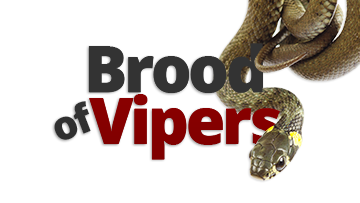 Brood of Vipers
How can any of you escape damnation?