The Church Is Necessary for Heaven

No question about it.

I'm Michael Voris coming to you from the middle of New Hampshire where a confrontation is shaping up over perhaps the most pressing question in the Church today: Is the Catholic Church necessary for salvation?

A large number of Catholics, including many clergy, are ignorant of this dogma of the Church owing to decades of watered-down catechesis and formation.

Add to that, the Church of Nice approach, like Bp. Robert Barron's preaching that we have a reasonable hope all men are saved, and we have a living breathing contradiction in understanding.

For the past 60 years or so in Catholic theological circles, an emphasis has been placed on union and reconciliation between various faiths and religions and beliefs, so much so that the uniqueness and very identity of the Church has become obscured and almost completely lost, certainly in the minds of the average Catholic.

Catholicism is often viewed as one choice among many, preferable only insofar as it also enjoys some cultural connection or long-standing familial nostalgia.

But that the Church is unique, superior to all other faiths and absolutely necessary for salvation, this dogma of the Church has been lost in the practical sense.

Owing to many years of brainwashing by malformed clergy, the laity now simply assume everyone they know goes to Heaven when they die.

In fact, so remarkably poor has the instruction from malformed clergy been that even the dogma of purgatory is skipped over. So not only when nearly everyone dies do they go to Heaven, but they go straight to Heaven.

This is the condition, the state of affairs in the Church today, and it must be admitted, faced up to and corrected. It is the concerted opinion of the vast weight of tradition, the fathers, the doctors, saints, mystics, popes and so forth that the vast majority of humanity is damned.

True, there is not a definitive Church teaching on the matter, but the weight of 2,000 years of deep reflection and meditation by the holiest and greatest minds in the history of the world should not be so easily discarded.

Yet in the last half of the 20th century and the first years of this one, many in Church leadership have decided to simply ignore the weight of tradition and begin speaking as though nearly all that preceded our contemporary days was wrong or, at best, insufficiently understood.

And that approach is applied to a wide range of teachings and practices in the Church, from liturgy to devotion to education.

Specifically, in the case of the necessity of the Church for salvation, there has been a fantastic ignoring of this, so much so that a virtual smearing of the doctrine now exists. But the truth of the dogma remains: Outside the Church there is no salvation.

What this means is the Catholic Church, being established by the Son of God, was established by Him to be the sole vehicle by which men may be brought to the Beatific Vision.

There is not another way, or other ways or religions. God is one, and there is, therefore, only one way. And that way produces a full unity with Him for eternity, a unity which begins here on earth in the Church.

So for priests and bishops to try and or sidestep the reality of the Church, the only ark of salvation, is spiritual terrorism.

We live in an age where tolerance and non-judgmentalism rule the day, where the highest moral good is to never give offense or inadvertently hurt someone's feelings — in short, being nice.

But being nice is not a virtue. Telling the truth when appropriate is a virtue — it is, in fact, a sin not to. To downplay, ignore or massage the teaching in such a way that it no longer has any relevance is wicked.

This dogma goes straight to the heart of the spiritual life. Is a person called to the Catholic Church to participate in the sacramental life of the Church to increase in sanctity by cooperating with the grace of the sacraments or is he not?

Can a man walk through life and by himself, unassisted by grace — all of which flows from the Church directly or indirectly — fight off the demonic attacks sufficiently to obtain his salvation?

Since the demons, by their very nature, are more powerful than humans, how would it be possible without not only the cooperation with grace but the constant spiritual maintenance afforded by constant access to grace?

To deny this, either outright or by sidestepping it, or nuancing it, is a wicked thing to do because it reduces the very vehicle for salvation established by Christ to a personal preference.

This teaching is the very reason missionaries by the hundreds of thousands throughout our sacred history risked life and limb to bring the Church to the four corners of the world.

They were motivated by a love of souls and a desire that they should enter the Church — which, again, is necessary for salvation.

Supernatural faith and baptism are necessary as taught and affirmed in the Catechism and even again by Pope Francis, just last February.

In this letter from the Congregation for the Doctrine of the Faith entitled Placuit Deo and addressed to "the Bishops of the Catholic Church on Certain Aspects of Christian Salvation," it states clearly:

The place where we receive the salvation brought by Jesus is the Church, the community of those who, having been incorporated into this new order of relationship begun by Christ, can receive the fullness of the Spirit of Christ. ... [S]alvation consists in being incorporated into a communion of persons that participates in the communion of the Trinity.

It says at the conclusion, "The Sovereign Pontiff Francis, on February 16, 2018, approved this letter ... and ordered its publication." The publication was done on Feb. 22.

There is no getting around the necessity of the Church for salvation. Everyone who is saved is incorporated into the Church Triumphant.

The Church Triumphant that the saved are each incorporated into for eternity is the Catholic Church — not the Presbyterian, nor Mormon, nor Lutheran; likewise, not other religions like Islam or Hinduism, nor philosophical constructs like Buddhism.

The Catholic Church and She alone is the sole means of salvation, so ordained by Jesus Christ and repeated by His Church.

That teaching has created something of a firestorm in the current culture, and a religious community here in New Hampshire has unwittingly become a flashpoint for that firestorm.

In the next couple of Vortex episodes, we are going to bring you details of this controversy and explore some of the internal politics of the Church fueling this all-important issue. 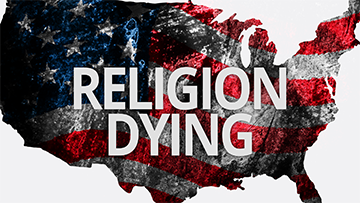 Religion Dying
Time for a rebirth.