And the Dems love it — need it, in fact.

Before we begin, we'd like to give you a quick update on affairs here at the studios. As you may know, the governor of Michigan yesterday put the state on lockdown until at least April 13. Since we are in Michigan, that impacts us, but not as much as you might think.

Since the apostolate functions quite often as a media outlet, we're exempt from the shelter-at-home order when it comes to essential personnel. That means people here can come into work. So we have scaled back to a skeleton crew who are coming in just long enough to get done what can only be done in the studio, and then they go home and complete the work there. This way we strike an appropriate balance between keeping staff safe and still keeping you informed, just like the Marxist media is doing.

Which brings us neatly to our topic today, which comes with a serious warning. Watch out! This whole Chinese virus-event is being weaponized against President Trump by the Left and their Marxist media allies.

Whether it was planned or just a crime of opportunity, that cohort is using this chaos as a way to 'get Trump.'

While we can talk about how the commies in China are responsible for this — whether they created this virus to dump on the Hong Kong protestors as some speculate, or they made it and it somehow escaped the lab — a few things are certain. They lied, which can't surprise anyone. The communists in China, like their Marxist buddies everywhere, are stone-cold killers.

So whether it was planned or just a crime of opportunity, that cohort is using this chaos as a way to "get Trump."

Not sure why so many people are unwilling to see the likes of the Marxist media or Democratic leadership for anything other than what they are, which is killers. What's the difference between any of them and a mob boss, seriously? In fact, no mob boss in history — in fact, all of them combined — couldn't reach the death toll of just one day's worth of child-killing.

These murderers are all in league with one another. They cover for one another because they all have the same father.

Consider the fake outrage at Trump calling the virus from China the "Chinese virus." But that's what it is. Would they be as outraged if Obama, one of their club, ever said German measles or Spanish flu? Of course not. He's not Trump, so they don't have to "get" him.

All you have to do is look at the kerfuffle on Monday, as The New York Times changed its headline three different times to cover up the truth of what the Party of Death was doing to scuttle the economic stimulus package. Look at these headlines, or rather, the progression of them. We go from the factual headline of  "Democrats Block Action on $1.8 Trillion Stimulus" to "Democrats Block Action on Stimulus Plan, Seeking Worker Protections" to "Partisan Divide Threatens Deal on Rescue Bill."

This is what this crowd does. They lie and cheat, all to cover for their killing of children. They want Trump gone because of that issue. And frankly, it was looking pretty dismal for them given the soaring economy, the best perhaps in the history of the world.

Trump has to go because of the abortion issue. It's just the circumstances and weapons that keep changing. The game is the same.

Then along comes a virus ... and you know the rest. It's Trump's fault. He's a racist. He closed the borders too soon. He didn't act soon enough. We child-killing governors did not prepare over these past years to get our own state's medical emergency response readiness up to speed, but that's his fault.

Frankly, there is no reason to believe the Party of Death would want any of this to come to an end before election day, as long as they think they can score political points. They hate Trump — really hate him — and it's all driven by their love of abortion, which is underlined by their rejection of the supernatural. That's why they go on non-stop, hypocritically, about the natural world. "Save the planet," "save the whales"...

Marxists love abortion — the godless, that is. That's what the Marxist media, the Party of Death and the commies in China, who gave the world this pandemic, all have in common. And when it comes time for the election, don't believe their point man's garbage about being a believer. Joe Biden is just as Marxist as Bernie Sanders. He just hides behind religion and specifically the Catholic religion. His campaign has even produced a video — get this — showing Holy Joe talking about going to Mass and saying his Rosary.

It's revolting. So yes, don't take your eye off the ball on this. Not a single thing on the agenda has changed. Trump has to go because of the abortion issue. It's just the circumstances and weapons that keep changing. The game is the same.

The commie virus from China, the Party of Death believes, has given them a ray of hope for the upcoming election. Don't let it happen. 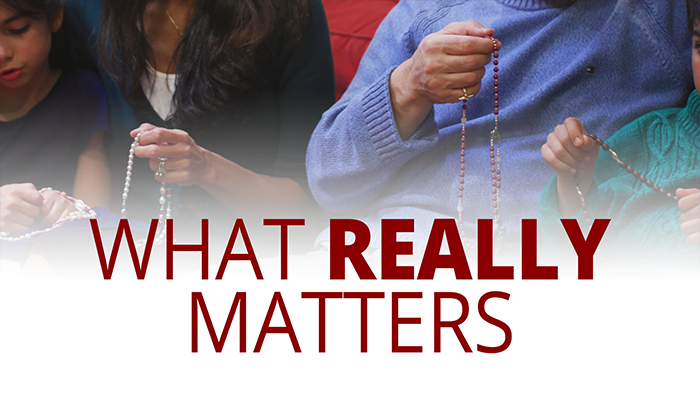 What Really Matters
The next life.