But not the crisis you think of every day.

If there was ever a question of the Catholic crisis not being mainstream, those questions can now be laid aside.

Sean Hannity, the dominant star of prime-time cable news commentators, has made it official.

He is leaving the Catholic Church, and his reason — as stated in an interview published three days ago in the Christian Post — is the Catholic Church has "too much institutionalized corruption," adding that it has not been rectified.

The 57-year-old Fox News star, to be certain, had already been on record years ago saying he disagreed with Church teaching on birth control, as was famously revealed in a 2007 Fox News interview with then Fr. Thomas Euteneuer.

But before we pigeonhole him and his latest announcement about leaving the Church into a specific box, we need to learn something here.

Given the near-daily reports now of corruption, it's easy to think of the crisis in terms of these unfolding scandals of homosexual priests abusing teenage boys, or bishops covering them, or Vatican officials ripping off billions, using money for gay lovers, or misdirecting money donated for charity for investments or administrative costs. The scandals show no signs of abating.

But those scandals are only symptoms of the greater crisis — a crisis as Church Militant has been saying for nearly a decade — is of supernatural faith within the hierarchy.

Of course, when you lose your faith, all these horrible, sinful, wicked, evil things are going to happen. And how has that trickled down to the average Catholic, like Hannity in this case?

The lack of faith among the hierarchy has been an issue for decades now, and it would be preposterous to not understand the massive falling away from the Faith this has caused.

The dominant effect of the crisis has been this: the Faith not being transmitted to the laity. And that stands to reason; one of the first principles of philosophy is: You cannot give what you do not have.

So how could a clergy and hierarchy that no longer possessed the Faith themselves transmit it to a laity being besieged by a culture attacking the Church on every side?

At the very moment the laity needed fathers to stand and protect them, these men deserted them. But more than deserting, they also betrayed them by setting in motion the machinery to perpetuate the evil for generations to come.

In addition to just themselves, they also recruited thousands and thousands of other homosexual and faithless men into seminaries. They populated the seminary faculties with gay abusers. They kept orthodox men out of the seminary and ordained active homosexuals to go out into the parishes and corrupt the minds of the faithful.

These wicked men stood in pulpits and worked out their own psychological trauma instead of teaching the Faith, slowly perverting congregations and turning them away from the Faith.

Sean Hannity is responsible for his own choices. No one is saying anything else. But — and it is a big but — his public apostasy has not happened in a vacuum, as it hasn't for tens of millions of other American Catholics who have also left the Church.

Interestingly, Hannity says since leaving the Church he is "closer" to God. That would be the expected response from any Catholic who was taught next to nothing as a child, and then has witnessed nothing except a steady flow of one story of corruption after another pouring out of the Church.

Of course, the correct response is to remain in the Church and fight for Her. But Hannity — like so many other Catholics, it would appear — apparently was never taught what the Church actually is — Who She actually is.

So he has no concept of staying and fighting for something because he doesn't see the "something" worth fighting for.

One final thought: There is a parallel case here for Hannity.

American politics and journalism are rife with scandal; the country itself is being transformed into a socialist state. The nation itself is transforming into something it was never destined or designed to be.

Yet Hannity doesn't throw in the towel on America and become a Canadian, for example. Why Because he has sufficient "catechesis," if you will, in what America is. He is schooled in the founding documents; he is schooled and educated in the country's history and so forth.

He understands it's worth fighting for. But in the case of the Church, he has little to no understanding. He was trained in the Faith by faithless men — by men who were, in reality, actual enemies of the Faith.

His move away from and now out of the Church can hardly be a surprise. 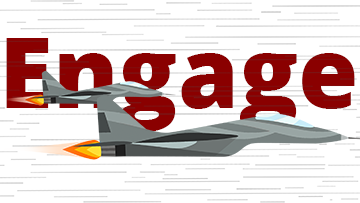 Engage
The time is now.